A couple of years ago I wrote about how excited I was that the Nelson's chicken-fried steak was back.  Well guess what?  It's back again!  As reported by Scott Cherry in the Tulsa World earlier this week,  Suzanne Rogers has brought the old buffeteria back to the South side and we couldn't be happier.  It is located at 44th and Memorial, where Betty Ann's used to be.
I remember when Betty Ann's opened back in the early 1970's.  My dad often scouted out places to eat during his lunch time and returned with the family if he liked it.  Betty Ann's was named after a teacher at Memorial High School, I'm told.  I am unsure of the ownership history these past 30+ years but I do know it has been an excellent location despite the decline in it's last years.  Breakfast and lunch crowds were usually good.
Ironically, one Sunday a few weeks ago after having lunch downtown, my spouse and I decided to cruise around some.  He wanted to check out the Nelson's Ranch House over on 3rd to see if it was still open on Sundays.  Owner Nelson Rogers has been playing around with the hours on weekends and we weren't sure what they were anymore.  It was not open and, in fact, we weren't sure if it was still in business - I noted that the signs and memorabilia that used to be by the entrance were gone.  We continued our drive and ended up on Memorial Drive heading home.  We both saw the sign at the same time:  Nelson's Buffeteria - !!  What?!  The sign had just been put up that afternoon.  We high-fived each other at our luck in having this so close by.  Breakfast was served one week later and we were there.
The lines have been out the door every day since that opening.  I knew that if we wanted lunch I was going to have to get there fairly early (before 11:30) to get a booth.  I was pleasantly surprised that sitting by the door entrance were 3 fellas playing tunes, just like they used to have downtown.  And the food did not disappoint!  The chicken-fry/mashed potatoes/gravy were just as I remembered them from years ago.  This meal was just a little bit better than the same at the Ranch House and it's because of the gravy, I think.  The new restaurant's gravy has more flavor. The fried okra was fresh and wonderful.  We each got a piece of Suzanne's pies (chocolate and coconut cream) to go.  Awesome.
Come to find out, Nelson's Ranch House is not out of business, just not open on Sundays.  And that missing memorabilia?  Why, it's all over at the new restaurant!  The old Nelson's neon sign has been located and is being readied to put up in it's new home.  Can't wait. 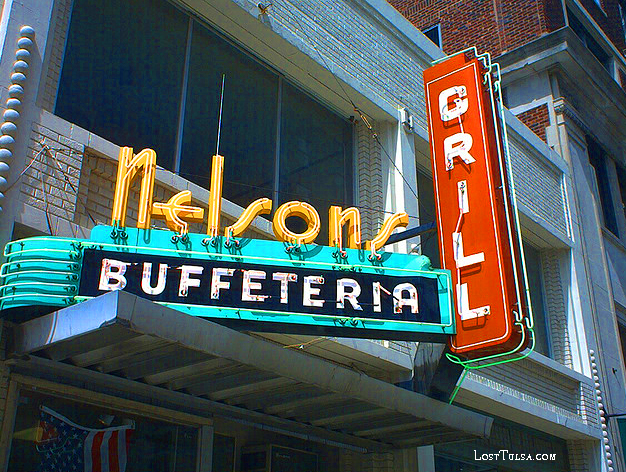 This makes me hungry for chicken fried steak. I'm glad to see you posting again after a couple of months.

How exciting. Sometimes it really (insert expletive here) to no longer live in Tulsa.

The last times I visited the Ranch House, many years ago, it was in sharp decline. Glad to hear it still exists and serves up a good meal these days.

Hooray, Nancy,for your great detective work!!!
Now I know where I'm eating lunch next time I'm in Tulsa!
Thanks!

Thanks everyone. I get hungry just thinking about that place. Today the line was out the door and down the walkway when I drove by at lunch.

Visited the downtown Buffeteria while working in Tulsa, loved the food and staff and the band. Glad to know it's back and stronger than ever! I'll drop by when I am in Tulsa, for SURE!

Read in the Tulsa World classified ads last month that the downtown business was for sale. $35,000 as I remember it. Went there once and thought it was just OK. Still want to try the one on Memorial. I've heard that it is most like the original.

Yes, the Memorial Nelson's is most definitely like the original. Too bad the other one couldn't make it.

Is this the business that used to be in Utica Square? I remember living the highlife in the early 60's visiting a popular buffeteria there, and have been trying to remember its name.