Tulsa was incorporated as a “town” under the pattern laid down in Arkansas law, on January 18, 1898.  The first School Board was elected in 1899, their prospect challenging.  Over 100 students were attending the 3 church/mission schools and even more would attend if it were free.  The schools were running out of space. Most of the pupils lived north of the railroad tracks so a school was needed there.
The first problem was solved when the Presbyterian Board decided to sell its Tulsa property (located at what is now 4th and Boston). The school board had no money and by law, an incorporated town could not incur debt.  Private buyers were clamoring to buy the land.   Four Tulsa men stepped forward- Jay Forsythe, R.N. Bynum, J.M. Hall and Joe Price- to save the day…… and the school.  Banker B.F. Colley loaned $1050 to these men who bought the property and held the note until the city was able to repay the principle from tax funds. 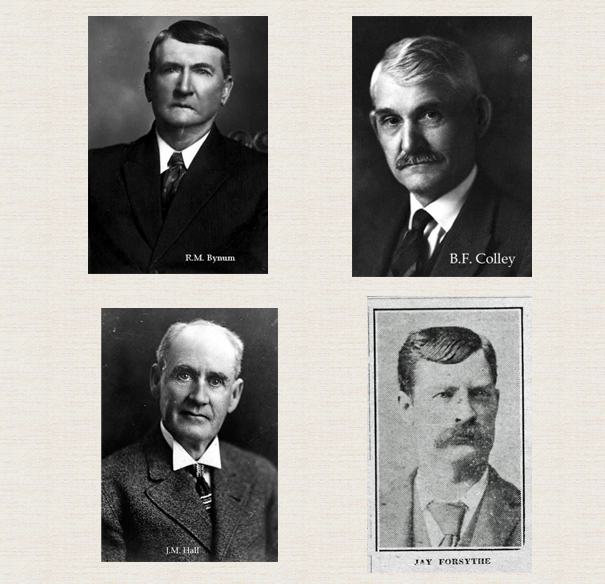 Immediate improvements were made to the little school building.  Two rooms were added above the old ones.  Stairways led from the outside to the front and rear doors upstairs.  Painted, plastered and newly roofed, the first public school building was a matter of considerable pride.  Soon a room on the north side was added for primary grades.  The School Board hoped this additional space would last for several years. 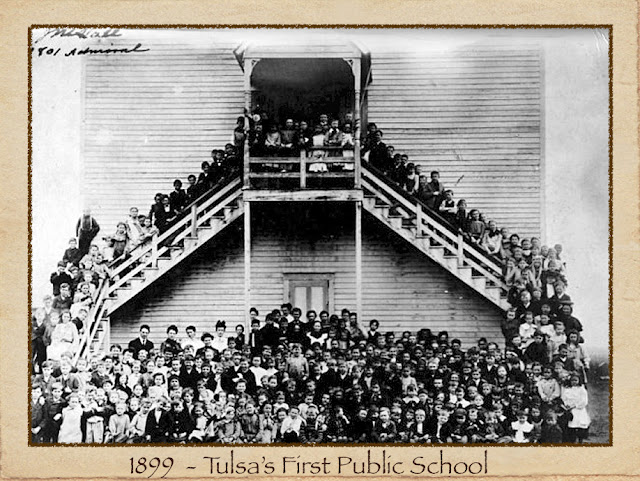 The picture changed abruptly when oil was discovered at Red Fork June 25, 1901.  Two months later a town site survey was begun and within the year all residents were able to buy land from the Creek Nation.  This increased the tax base but city income failed to keep up with the school population.  Make-shift classrooms were opened in any sort of room available.
Following the 1905 school term, with joy and sadness, the little white schoolhouse that had served Tulsa for 22 years, was torn down to make way for the new Tulsa High School. 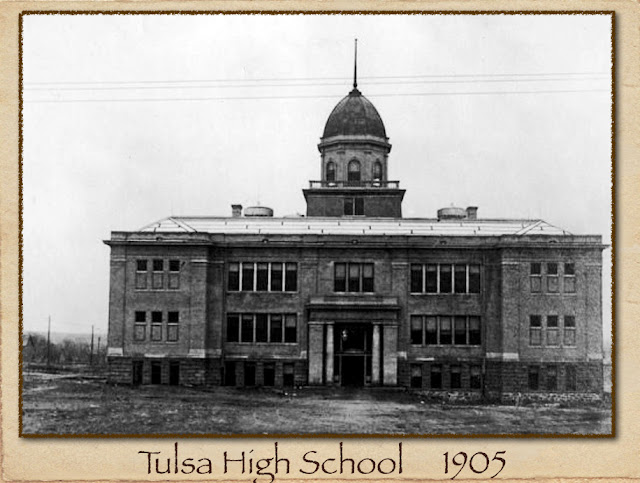 The new buff-colored brick building, which combined both grade and high school classes, boasted 21 classrooms, plenty of good slate boards, ample cloakroom space, a small auditorium and gold-leafed dome. The new school might have been built earlier than 1905 had there not been the rivalry between north and south residents about where to build it.  A compromise was finally reached.  The south side residents would get their school as would the north side residents.
To many children the use of running water in the toilets was the greatest luxury they had never seen.  The new school was jokingly called Our Lady of Mud due to the fact that there were no sidewalks or paved streets leading to the school and many got stuck in the mud. 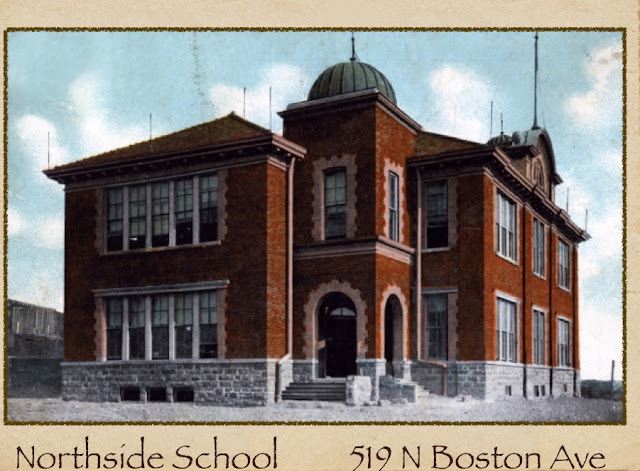 Work also began at the same time for the Northside School located at 519 North Boston.  The building had eleven rooms and boasted "splendid light, good ventilation, automatic heat regulation and the best sanitary conditions possible".  Three years later the school name was changed to Sequoyah and it was expanded to include four ward buildings of eight rooms each plus a bell tower was added. 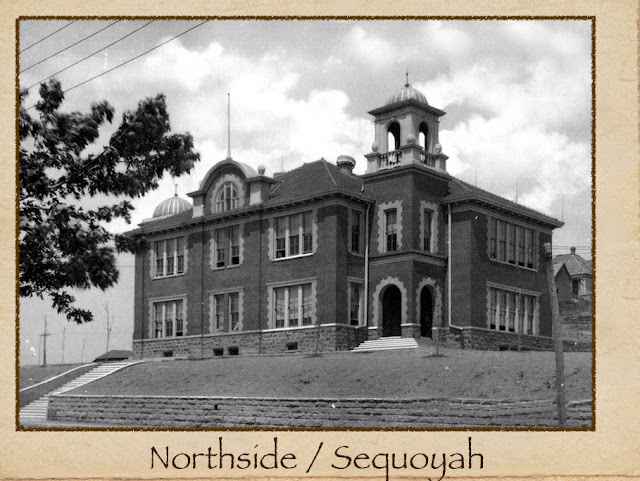 Eleven hundred children entered Tulsa’s two new schools in September 1906- 300 at Northside and 800 in the “south side” school.  In 1907 the school buildings again became badly overcrowded with an increase of almost 700 students during that school year alone. New schools couldn’t be built fast enough to keep up. 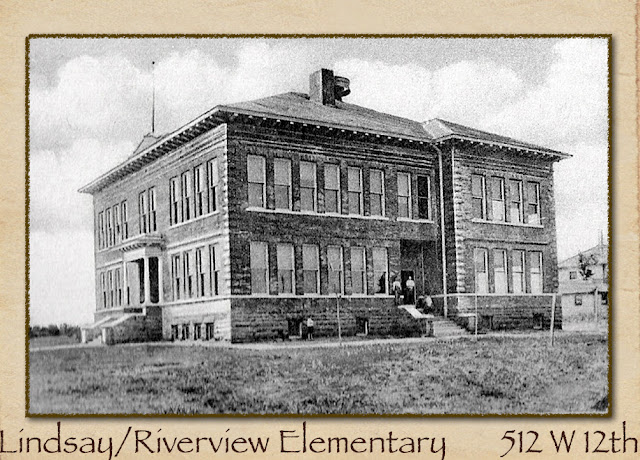 Lindsay Elementary was built in 1907 on the outskirts of town, named after one of Tulsa’s first teachers, Lilah Lindsay.  The school was later renamed Riverview in 1917. 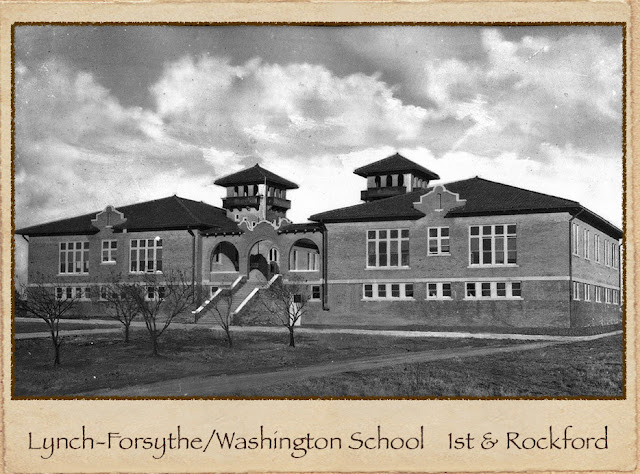 Lynch Forsythe School (later known as Washington in 1914) came along in 1908. 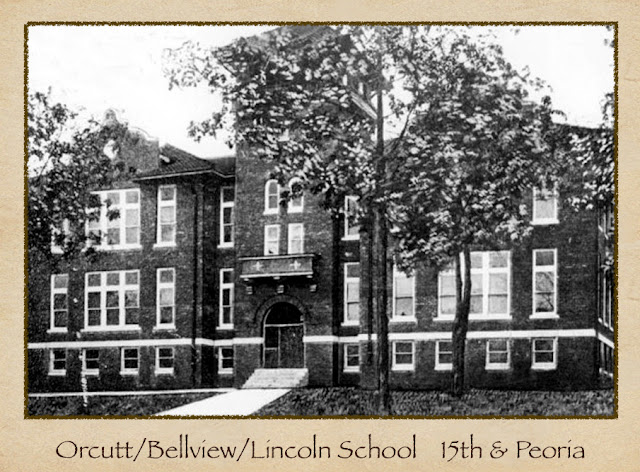 Orcutt School was built in 1909 again, on the outskirts of town, at 15th and Peoria.  The name changed soon to Bellview and again to Lincoln. 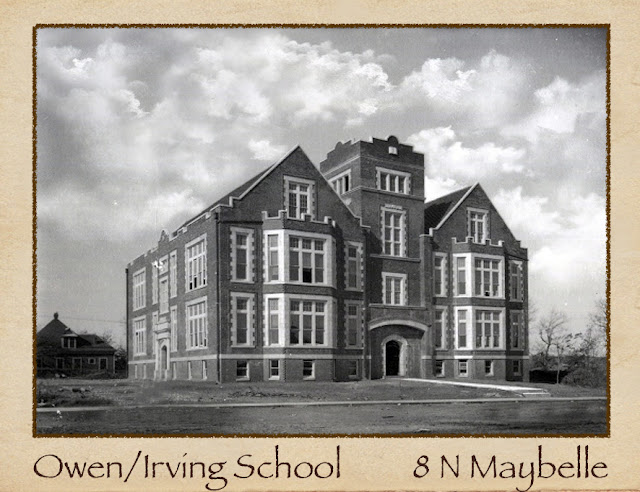 Owen School was also built in 1909, bringing the total that year to eight public schools.  Owen changed it's name to Irving in 1918.  The building still stands today. 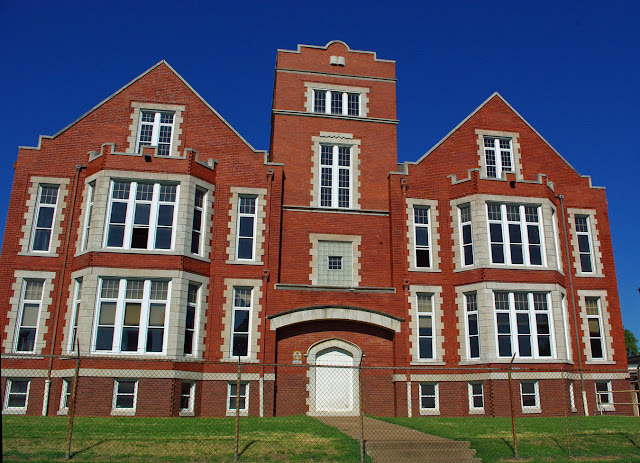 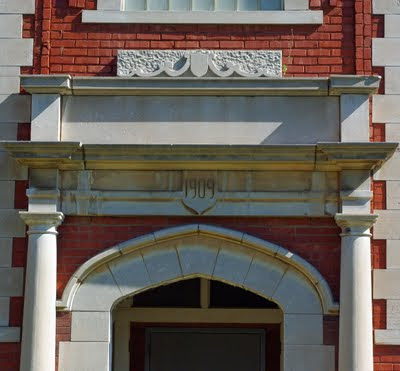 What a wonderful set of buildings. Tulsa's rich architectural heritage goes beyond the buildings of the Art Deco period and the oil boom days that many associate with my home town. Thanks for sharing these.

Based on Sanborn maps, I believe that Northside/Sequoyah School later served as the school district's maintenance department, with a garage, woodworking and paint shop, and tin shop added on to the east (back) of the building. The building is still standing in the 1967 USGS aerial photos.

My grandmother lived on Maybelle (can't remember exact address), went to Irving, and visited a little grocery store around the corner at 512 W Admiral - the Catron building - which is still there. She remembered peeking out her window and seeing wagons hauling bodies headed across the river after the 1921 race riot.

There was another school, which I understand was called Longfellow Elementary, on the corner of 6th and Peoria. Arthur "Doc" Barker and his younger brother, Fred Barker, attended this school from what I've been told, after their parents moved to Tulsa about 1916. On which corner would it have been located? From what I gather, it was across the street from Central (now Centennial?) Park. Are there any photos of this school?

I am in need of information on the old Longfellow Elementary School that was situated at 6th and Peoria in the early 1900's through at least the 1970's. Thanks.
W.D.Smith

Longfellow sat on the northwest corner of East 6th Street and South Peoria. Yes there are photos of the school, students and teachers in the Beryl Ford Collection. Hopefully this link will take you to them.

Ran across your post. I also grew up in Tulsa and heard several stories concerning bodies being despised of. Only one location being searched was ever mentioned. I heard stories of bodies floating down the river tho. Could these have been the bodies your grandmother saw? I don't believe they will find anything at new block park as it was the only active water treatment plant in Tulsa at the time and surrounded by whites to the east and north, redfork was too close on the west for much secrecy, but it would have been a close and convenient dumping site for the convention center bodies. The cemetery will also be a bust as no self respecting rioting racist would bury their victims in Tulsa's exclusively all white graveyard although another Tulsa grandmother told her grandson and I stories concerning 2tulsa parks that were established in that area afterwards. You are the 1st person I've ever run across that has eye witness stories other than my friend grandma. Would be interested in any of them you can share. Yours, Roben Hopkins

Orcutt Bellview lincoln school is now partitioned into many different businesses. I work at one of the restaurants in there.

Orcutt Bellview lincoln school is now partitioned into many different businesses. I work at one of the restaurants in there. There is word that this place is haunted because a child died there when It was a school. I would like to know the schools history