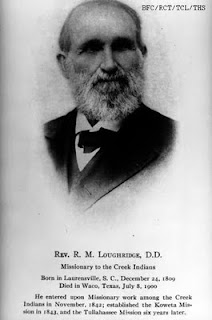 Ordained as a Presbyterian minister in 1842, Robert Loughridge traveled 600 miles on horseback to ask the Creeks if he might establish a mission-school.  They wanted a school but no preaching but soon changed their minds. In 1843 he established the Koweta Mission and school,  located near present day Coweta. 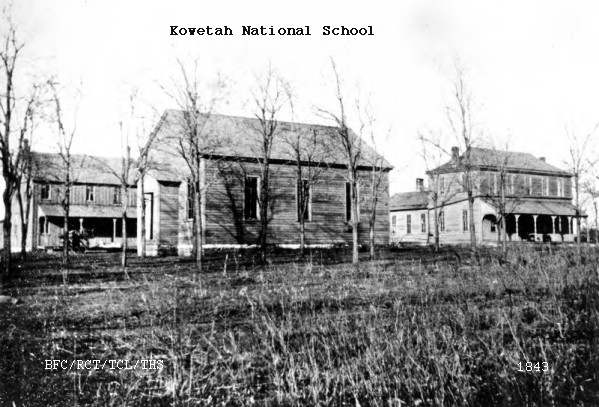 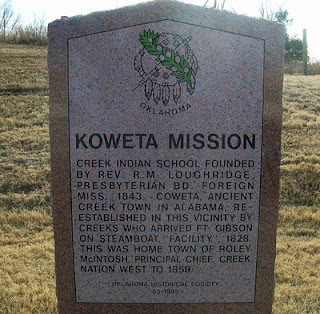 His first wife, Olivia, taught alongside Robert, bearing him two children before passing away in 1845.  The following year he married another teacher, Mary, who taught at Park Hill Mission (located south of Tahlequah) in the Cherokee Nation. 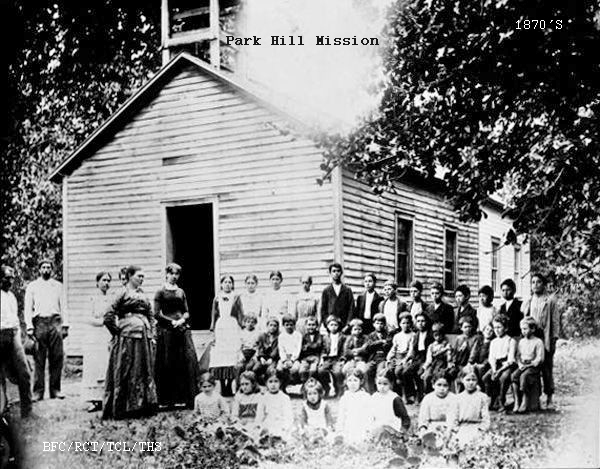 The Creek government established Tullahassee Labor School in 1848, located about 5 miles northwest of Muskogee, and named Loughridge superintendent. He supervised the construction in 1848-1850.  Mary Loughridge passed away in 1850. 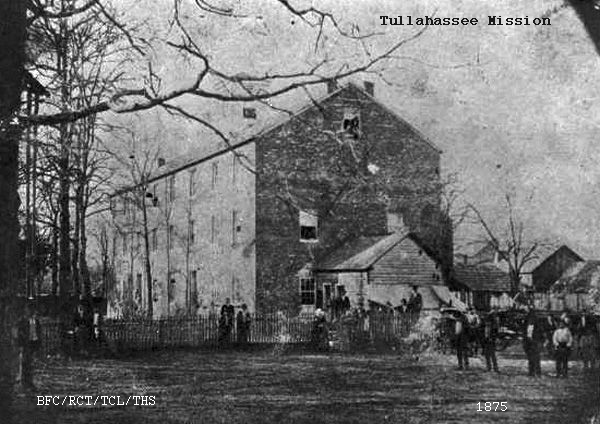 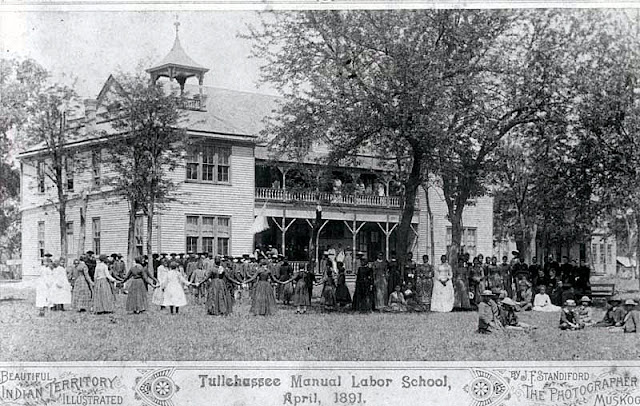 Robert retained his post until the Civil War forced him in to Texas.  He returned in 1881 to be the superintendent at the Creek Nation's new Weleaka School located between Bixby and Leonard. 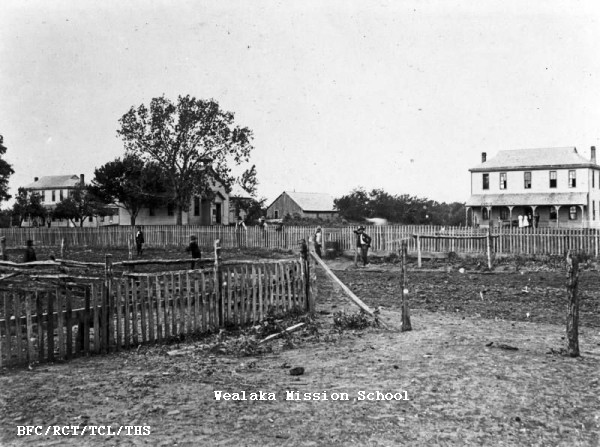 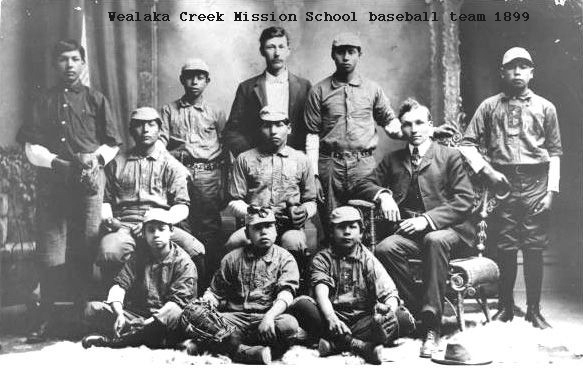 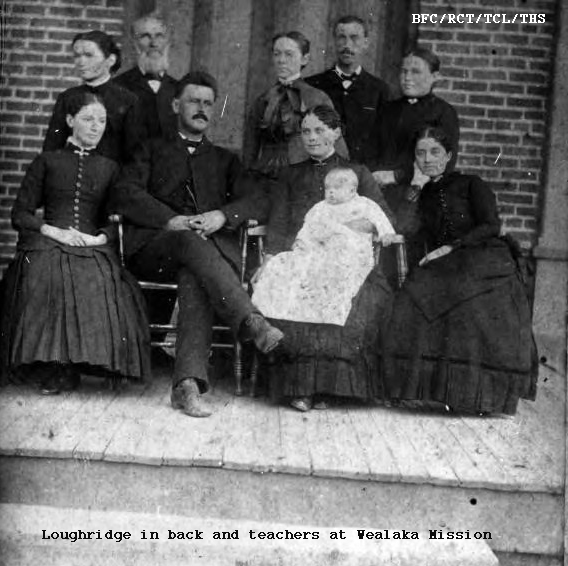 Loughridge became an expert in the Creek language during his ministry to them.  He translated and transcribed portions of the Bible with the assistance of Legus Perryman (one of many grandsons of Benjamin Perryman) and published an English and Muskogee Dictionary with David Hodge in 1890.
-----------------------------------
In the 1870's Creek Indian Daniel Childers built a small church so that Rev. Loughridge would have a place to preach to the Indians in the community of what is now Broken Arrow.  According to the Indian Pioneer History Project, the lumber was brought overland from Coffeyville and it was named the White Church because it was painted white and painted buildings were quite unusual in those days.  The five acres adjoining the church lot on the north became a cemetery that was named for Dr. Loughridge.
The church was used as a school house during week days in the early 1880's.  Lilah Lindsey taught at this school between 1880-1885.  It was primarily a community church but was looked after by the Presbyterian board.
This photo was taken in the 1940's: 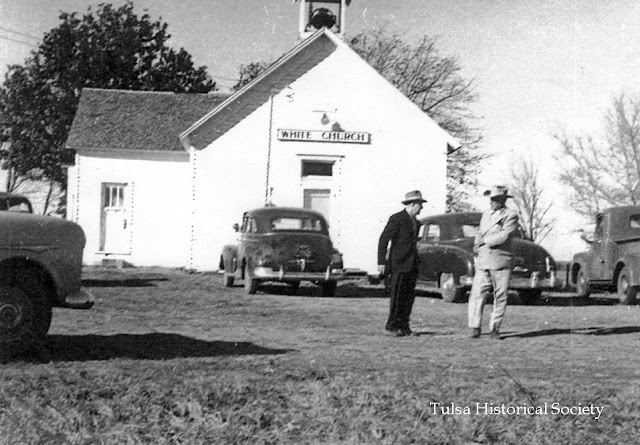 Recently I took a drive by the White Church.  It is located on 129th E. Ave and 131st Street.  The church still stands proudly, obviously well taken care of although missing the once-cherished bell.  It is used by another denomination at this time. 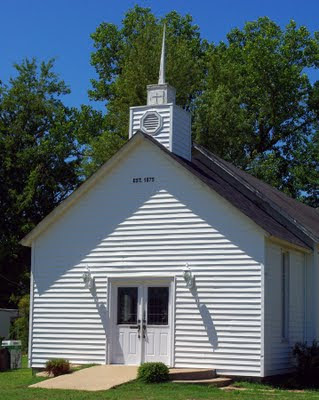 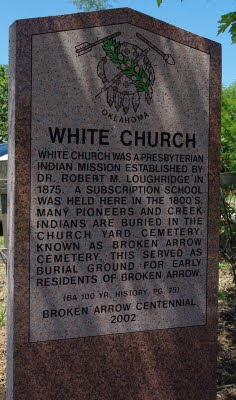 In the cemetery the oldest grave is said to be that of Daniel Childers himself who was buried in 1885.

The Reverend Thomas Perryman (son of Lewis) lived in that vicinity and also preached at the White Church.  One of his daughters, who died at age 3, was buried there about 1883, perhaps one of the first. Her body was later disinterred and placed with her father at Oaklawn Cemetery along with the marker brought from the Loughridge Cemetery.
Sources:  digital.library.okstate.edu,  Indian Pioneer Project
Posted by Nancy at 7:42 PM

I live close to this church and cemetery and no idea of its history. Thank you for this very interesting information!

You're welcome! Thanks for stopping by.

Also....I'm very fascinated with the fact that Lilah Lindsey once taught there. I've always been interested in her and her contributions to Tulsa. Until reading this, I didn't know she had had any connection to the Broken Arrow/Bixby area.
Thanks! Beverly

From your photographs the Tullahassee Labor School and Tullahassee Mission School were both impressive structures. Is there any trace of them now?

Bill,
According to the National Registry of Historic Places, they were one in the same building. The Creek Indian Council gave the school to the freedmen in 1881. In 1916 the African American Church established Flipper Davis College and used the old mission building. It was closed in 1935. The A.J. Mason Building, built in 1912, is listed on the National Register of Historic Places and is the only remaining original structure in the town of Tulahassee, OK.