The medical profession was changing drastically by the late 1950's.  The role of Family Doctor was becoming outdated, replaced with specialized medicine.  This meant that many times, the family physician was not allowed admitting privileges to hospitals and had to turn their patients over to "specialists".  In a bold and courageous move, 19 Tulsa doctors took on the challenge to build a new non-profit hospital in the 1960's.  These family physicians wanted their own hospital and would use only private money to build it.
----------------------------
At one time, all of Tulsa's physicians were located downtown in basically one building - that being the Medical Arts Building which sat on the southwest corner of 6th and Boulder. 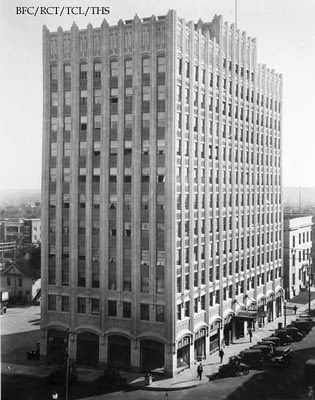 When these young doctors began searching for a place to build their hospital, they had to go way, way out to "the edge of civilization" to find their land, located at 24th and Harvard.  They purchased 10 acres of suburban tract land for $180,000 from the Batsell brothers.  This was the highest price recorded at the time for that amount of land.  The Batsell's had inherited this land from their father, F.N. Batsell who died in an automobile accident in the 1950's.  Mr. Batsell was the president of the Coca-Cola Bottling Co. of Tulsa.  He had purchased this land originally to build a bottling plant but the zoning was denied.  He was considering building a shopping center there at the time of his death.
When the doctors purchased the land, there were just a smattering of houses in Mayo Meadow neighborhood and virtually no businesses east of there.   It took them some time to find a bank that would loan them the money; in fact, they had to go out of Tulsa to do it.  When construction began the crews were faced with building on land that was once a coal mine.  It meant digging very deep.
The hospital eventually opened in August of 1966 with 100 beds and was designed with the comfort and well-being of the patients in mind.  There was a 24-hour public restaurant and color televisions in every room. The hospital was a financial success.  It was expanded twice, a chapel and conference center were added as well as a six-story professional building for about 30 doctors.  Thanks to doctors like this founding group, Family Medicine became a recognized specialty.

Tulsa's Doctor's Hospital was the first to carry the emblem of the American Academy of Family Physicians.  And the first hospital west of the Mississippi to be built completely with private funds.
--------------------------
Doctor's Hospital was sold on September 29, 1983.  With the proceeds of the sale, the founding physicians established a non-profit group called the Founders of Doctors Hospital, Inc. which supports the charitable activities these physicians believed in.  The last living founder, Dr. Joe Salamy, passed away last August at the age of 91.
Posted by Nancy at 8:09 PM

A friend of our family was the nurse to one of the founding members, Dr. Fred Woodson. Dr. Woodson was one of the TU team doctors for a number of years. The hospital opened the year after I graduated from high school.

My mother, Elizabeth"Bette" Kelly, was the director of nursing at doctors hospital and the most exceptional and finest RN in Oklahoma including Bartlesville. I remember all the original board members of Doctors Hospital. My daughter was born at Doctors Hospital in Tulsa 1976.

Doctors Hospital is located at 2323 South Harvard, in the earlier years.
My mothers career began in Bartlesville, and Hillcrest in Tulsa.

I was a patient there back in 1970. I had spent three months there. I was nine years old at the time. My room was #232, however I can't recall any of the nurses names. I do remember that they were very compassionate caring nurses. I can remember that time I spent there my family and myself were treated very well and with respect. That was and will always be a big part of my life.

Today May 29 is my mother's birthday.
Bette Kelly. She was director of nursing and a registered nurse at Doctors Hospital. She was an excellent nurse and took care of so many people in her lifetime.
My name is Kathy Kelly and I'm her daughter. Her son Kevin Kelly wishes her Happy birthday. Your grand-daughter Shannon wishes you Happy birthday too.We love and miss you.
Birthday blessings Mother