Trains and oil booms are what helped create some little communities in what is now West Tulsa.  The trains carried oilfield workers and supplies to the oil fields.  Red Fork, where the first strike occurred, was close enough to Tulsa that most workers came back on the train rather than stay there.  The Glenn Fields, however, were far enough out that boom towns for these workers to live in shot up practically overnight.  A little town called Praper consisted of a few railroad workers until the Glenn strike.  Being the closest train depot to the Glenn Pool it virtually exploded and, by 1906 was home to hundreds of oilmen.  The town changed its name just before statehood to Kiefer.
Another boomtown was Taneha, which was Creek for "oil under land".  Located about four miles north of Sapulpa, Taneha was a typical rough and tough oil field community, one in which women did not go outside after dark.  Structures were usually just wooden frames with clapboard sidings and tar paper roofs.  Taneha boasted a grocery store, hotel and boarding houses such as Elizabeth Winter's Boarding House (below).

The Taneha Boarding House fed three shifts at each meal. 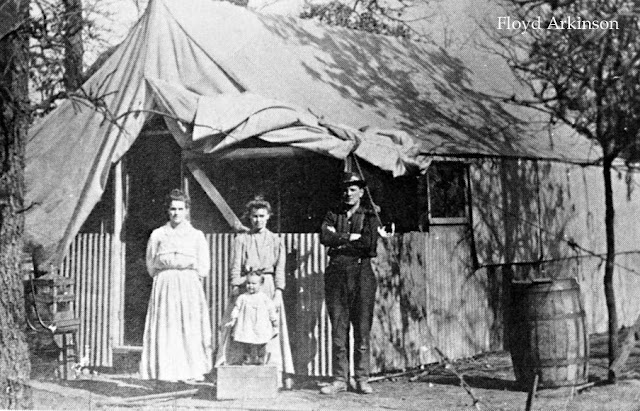 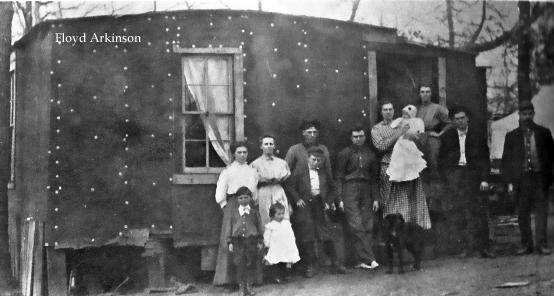 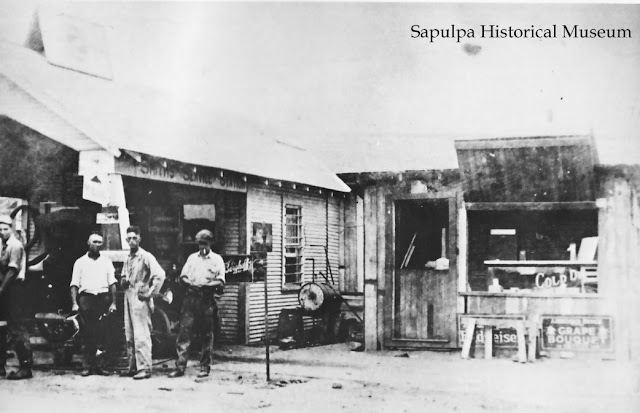 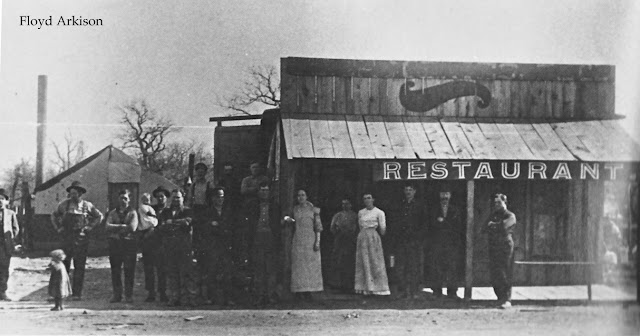 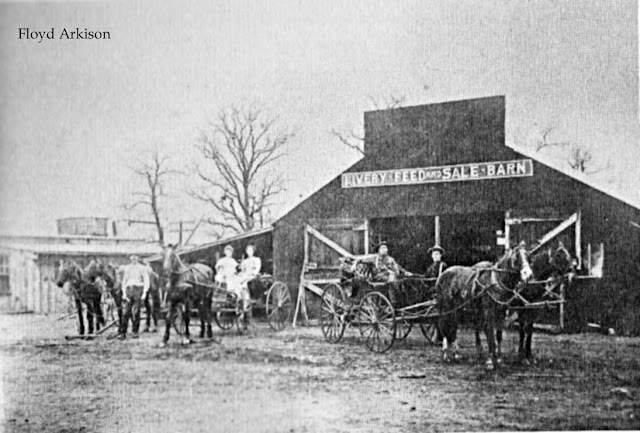 In 1909 a post office opened there and the town was re-named Bowden.  The post office remained until 1957.  But that wasn't the end of the Taneha name.

That same year,  L.J. Weatherman platted a community a few miles north and east of Bowden called "Business Men's First Addition to Taneha". Six months later it was renamed New Taneha.  The land changed hands and was re platted several times then sold to O.C. Graves in 1913.  Graves, a speculator from St. Louis, began drilling for oil and soon oil derricks dotted the area. 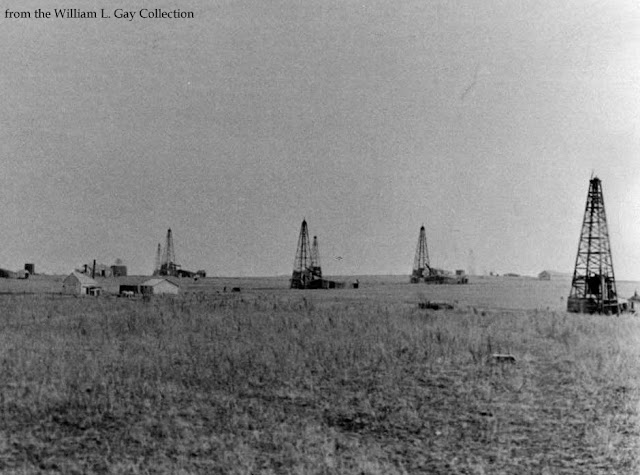 He filed plats for New Taneha in 1915 and, in 1918-1919 began an aggressive marketing campaign to gullible easterners, selling 25-foot lots and practically promising an oil well in every back yard.  A Main Street was laid out.. 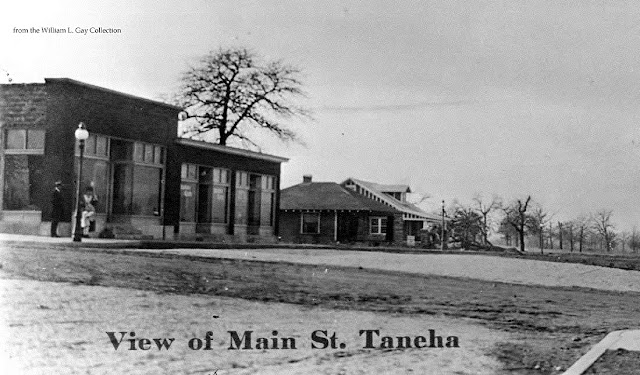 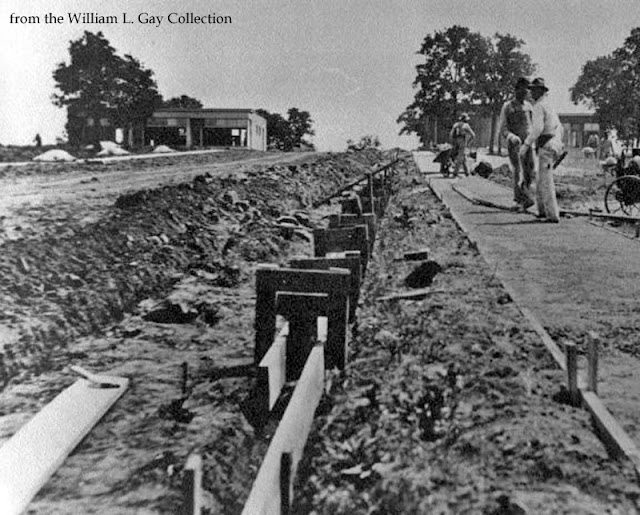 and natural gas-fed street lamps sprouted from them. 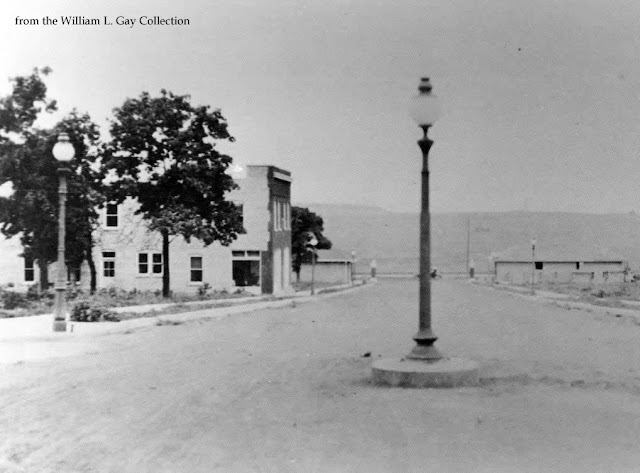 The entry into the neighborhood boasted brick pillars and matching canopied buildings on either side. 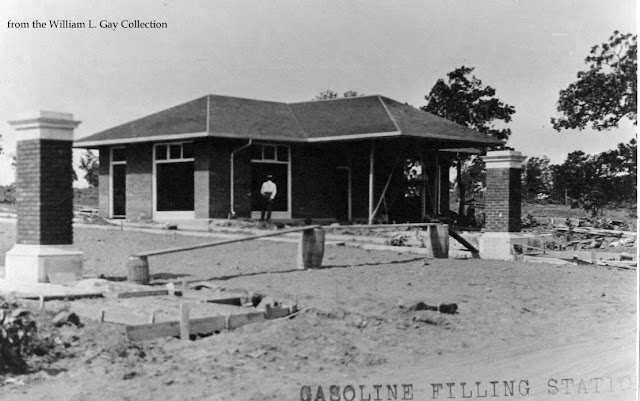 What Graves - and buyers- couldn't know was that the oil wells were drying up and the Great Depression loomed on the horizon.  Most buyers never claimed their properties and lost their investments.  And while it looked as though it would all dry up and blow away with the Oklahoma dust, another unknown factor came to light.  The road in front of the entrance pillars would become Route 66 in 1929, and a new generation came down it.  After losing jobs and surviving the Depression, the inexpensive houses were a draw.  While it is unclear exactly when it happened, according to old-timers who lived there, the Frisco railroad later gave the community the name Oakhurst because it's mail drop was near a grove of oak trees.  Click on the map below to enlarge: 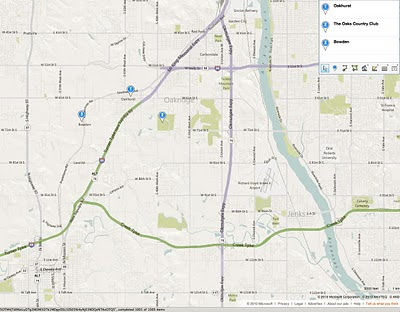 Thanks to an observant reader who pointed out that the above building still stands, even though the pillars are long gone: 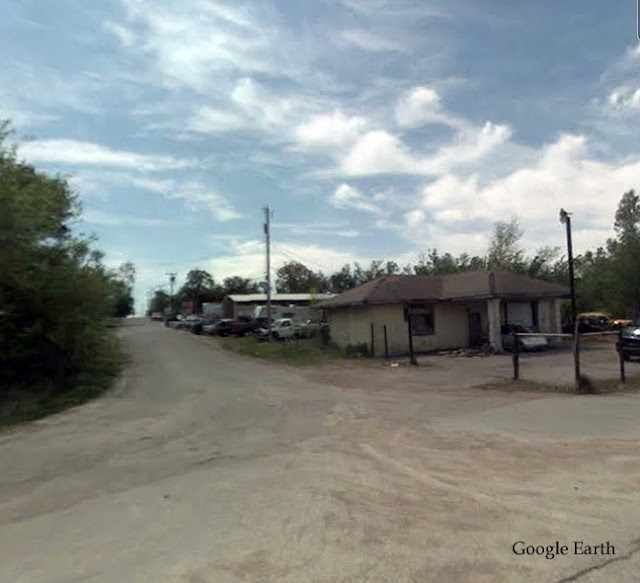 by Kenny A. Franks; The Tulsa Spirit; Southwest Tulsa History; The Tulsa World
Posted by Nancy at 9:33 PM

Interesting post. Google Earth shows the west building of the "brick pillars and matching canopied buildings" photo is still there and the ruins of the one on the east side of the road. No sign of the pillars. Look in Google Earth for "5890 S 63rd W Ave, Oakhurst, OK".

The building that is still standing looks a little worse for wear.

As I was reading yesterday I saw that Taneha was absorbed into west Tulsa. I always wondered where it was.

Two of the pictures I recognized as soon as I saw them. I have one of the originals. The one titled The Teneha Boarding House shows two of my Great Aunts and an Uncle. They are Anna Maud Latchaw/Henderson/Arkison/Scott. The baby is Floyd Arkison who later donated the pictures. The woman behind him is my Great Aunt Zella Latchaw/Dunn and her husband, Ed Dunn.

The second photo is Another Boarding House. Starting on the left is my Grandmother, Dora May Latchaw/Dale/Luton. The two children in front of her are my Dad's half sister and brother, Walter Foster Dale and Edna Grace Dale Fennel. The two women in the door way are Anna Maud Latchaw/Henderson/Arkison/Scott. She is holding Floyd Arkison. Next to her is Sadie Elizabeth Latchaw/Jacobs/Book.

As far as I know, the rest of the people were boarders.

My family has been in Oakhurst since 1957 and have lived on the same property since 1960. We are proud to say that our property has one of the first jails ever built in Oklahoma still standing with the bars still in it in our backyard.

Grew up in Oakhurst. A few houses north of Old Hwy 66.
About 30 years ago my dad found one of the gas street lights featured in the photos.
I still have it. Getting it restored.
Nice work on the entire site by the way.
Phil Ostrander

I was born & raised in Oakhurst ( Taneha ) The building in the picture was a little hard wear store when I was a kid in grade school , it was named Casy's back then & still in business , I remember as a kid about 10 I barrowed a friends bicycle to take a tube from my bike to be fixed , that is a bit of a hill there. Well my friends bike didn't have brakes & I didn't realize that it didn't until I needed them , LOL , I clipped the back of a car turning the corner there & I busted my elbow wide open. I remember running into Casy's store & blood was going every where.Old Lady Casy ( that's what we kids called her ) called my Mom for me.I'll never forget it.. I'll always be proud to say I'm from Oakhurst............ J.B.

My best friend grew up in Oakhurst that is her home town! I married a young man from West Tulsa and we had 2 kids and lived in West Tulsa and down the road from Oakhurst! I have such great memories of all the times I ran around with all my friends in Oakhurst and the West Side such an awesome community with great people who help eachother if someone needed it! I'm older now and 26 years have passed but I will never forget all the memories and how this was such a tightknit community....awesome memories of my late teen years and 20's!

The Mvskoke Creek work for "oil" is "neha" (which explains the last four letters of "Taneha"). I"m not sure where the "Ta" comes from however. The Creek word for land is Ekvnv typically shortened to "Kvn" when joined with another word. The Creek word for "under" is "elecv" (shortened to 'lecv when in a compound word).
Thus "Kvnlecv neha" would translate as "Oil Under Land". Perhaps the truncated "Kvneha" (oil land) somehow over time was corrupted into "Taneha"?

My best friend growing up was Richard Willhite. His dad ran the DX station next to Uptons grocery store. We had great times in Oakhurst.

I'm seeking permission to copy with credit given to The Colbert Retort for your comment above regarding the Indian name for Taneha. Please respond to Francene at the following email address:
bowdenreunion57.64@gmail.com

I'm seeking permission to copy pictures and information from this website to include in an album for Bowden School reunion attendees that will contain historical information along with pictures of the original one-room, rock school building, classmates, and our stories. TulsaGal, please contact me at the following email address:
bowdenreunion57.64@gmail.com

My dad and his family have lived here, in Oakhurst, for a long time! I am really interested in the history. Would there be any possibility of me coming to look at the jail structure? - S. Monroe

Oakhurst is a great place to wheel and deal I am still in oakhurst were we stay up late and pilfer great.

Stephanie did you get a response from A. Davis to visit the old jail? I would love to see this as well.

I have lived in the Oakhurst area for 25 years now. I have lived on my property for 20 years. A couple of years ago I moved my garden to a new spot. Well it turned out to be a lot more work than I expected. I have found what looks like a house foundation made up of big sandstone foundation rocks that are set three deep. I am really curious about the history associated with this site. If you would like to get in touch with me email me at: sammychapman@aol.com

i lived in oakhurst for years. the drug users are kind of a problem but ive never met more interesting people ever.

I lived in Oakhurst as a child we rented a two story house across from Roy pages auto part it was the most haunted house I ever lived in I lived there from age 4-8 then we moved up around the corn to another house owned by Bill Gay we lived in that one two more years my dad worked for Cloud Winning ham at Tulsa auto salvage the last time I drove through there that old two story house was gone and a auto shop was there then that's been twenty years ago but it holds alot of memories for me after we moved to sapulpa. Will

My Grandfather's Family is from Oakhurst. The building in the picture was my Uncle Bill Carroll's Tire Shop until the late 80's. I am Silas McCarthy eldest Granddaughter. Oakhurst is definitely not what it was during it the time period of this article. Yes the buildings are still there. However the morally corrupt that have invaded many of our Communities have found a Haven in certain parts of Oakhurst over the years.

does anyone know where I could get permission to metal detect this? I am very respectful to the land and will only dig small holes in a professional manner I will not leave any traces that I was digging. im am just looking for old coins and relics and any trash I will be taking with me to dispose of