There isn't an abundance of information easily available on the  coal mines that were once here in Tulsa.  I have found maps, which are helpful and useful- provided you can read and understand them.  I have found recollections from former workers and one lone newspaper article from 1932.  In it the reporter decided to see what the life of a miner was like and visited one of the mines on the "outskirts" of town.  His last remark:  "As we make our way back to the showers, I take off my hat to the miners and fervently confess to my guide that I'd rather see, than be one!"  There were a lot of interesting photos taken for this newspaper article.  Unfortunately the xeroxed copies make them unusable to share here.

This is a photo of men digging a strip pit in Indian Territory (photo courtesy Oklahoma Heritage Association): 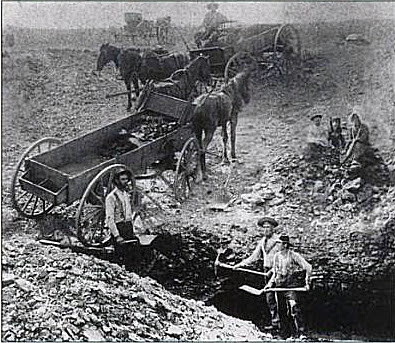 There were at least 14 coal mines in Tulsa.  Here is a map obtained from a reference book in the library showing them:
(click on photo to enlarge) 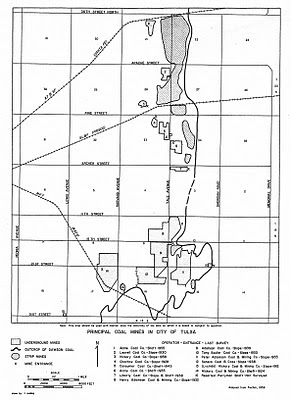 The other drawn maps are Sanborn Maps.
There used to be a town called Dawson back before statehood.  It has since been absorbed into the big city.  This Google map shows it to have been here: 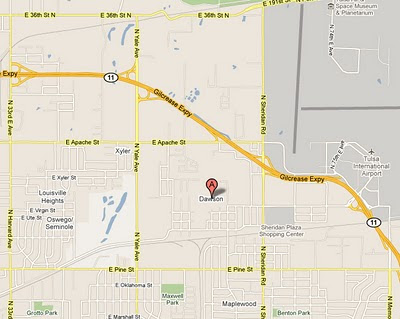 Dawson was the home of strip coal mining as well as a rock quarry.  The Smith Brothers owned and operated the coal mine there as did Leavell Coal Company. 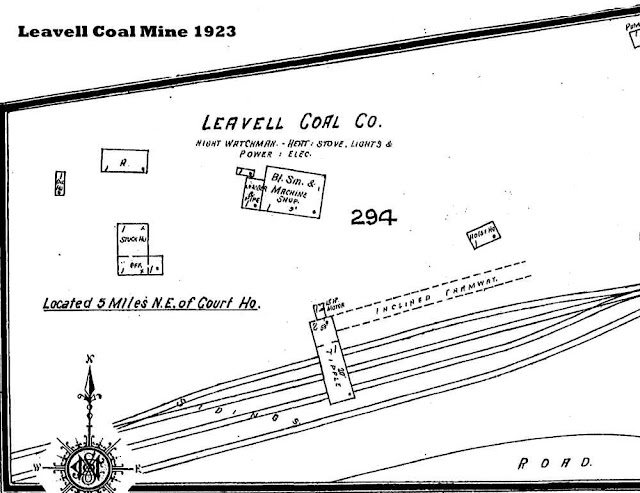 Since the Smith Brothers aren't on the above list, they were probably one of the first coal mines in the area.  This is a photo of workers with the Smith's daughter on the bank. 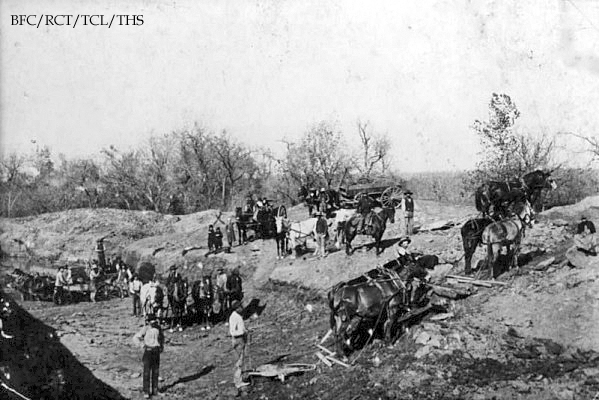 This was the Henry Adamson Coal  & Mining Co. and the Adamson Coal Mine - located together south of 11th Street between Yale and Sheridan. 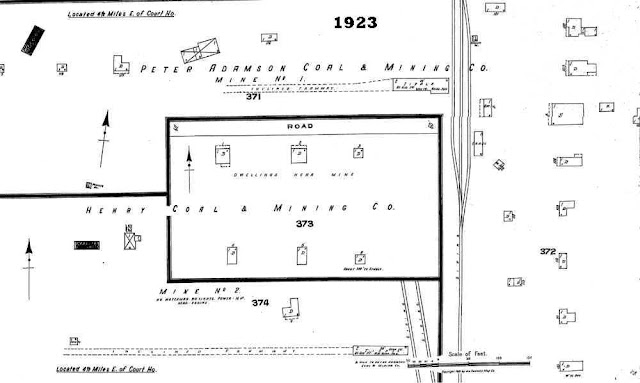 The Seneca Coal Mine was located on the land where Doctors Hospital now stands on Harvard.  When I was researching the Harvard Apartments Mystery I learned that, in the late 1940's Coca Cola was interested in building a plant "out there" but didn't because of the instability from the mines.  And years later, when the hospital was built, it was noted that in one of the elevators you could still smell the coal. 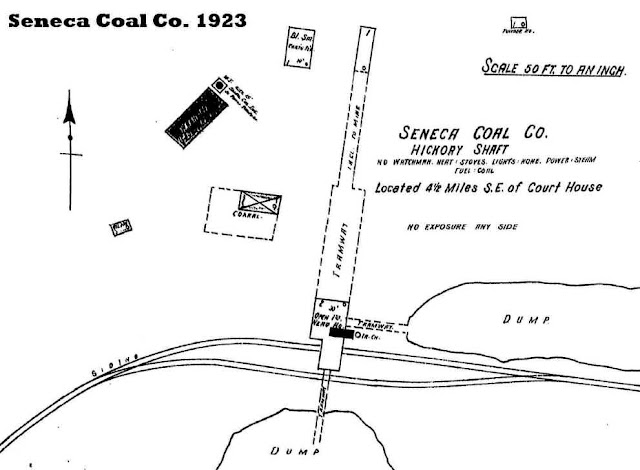 Next to the Seneca Coal Mine was Hickory Coal Mine #2 aka Lucinda. This little slope was located on the south side of 21st, just east of (what would become) the Broken Arrow Expressway.  This was the mine the reporter visited in the story I mentioned above.  Frank and William Podpecham started Hickory Coal Co here in 1929. 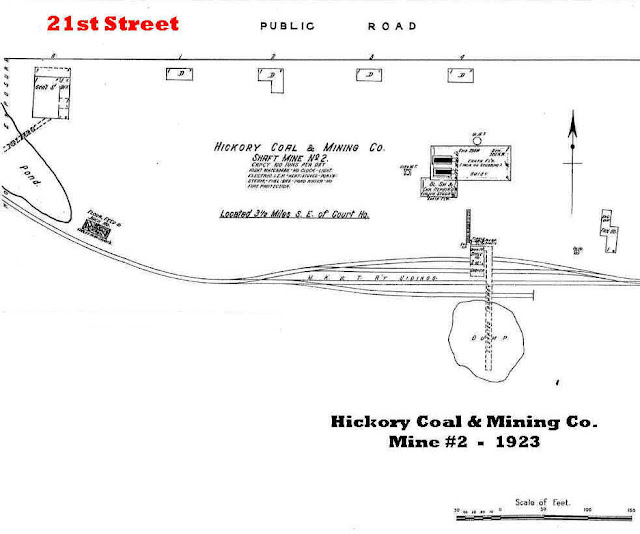 You can see in the map that the company general store was at the west end of the complex, as you would now go under the expressway bridge.  The miners, who lived in a 'tent city' of sorts,  had tokens that they would spend at these stores.

And then there are these maps that I snagged online of the Fairground area mines and shafts.  I'm not quite sure how to read the yellow lines - but what a honeycomb design they make!   Again, click on these to enlarge: 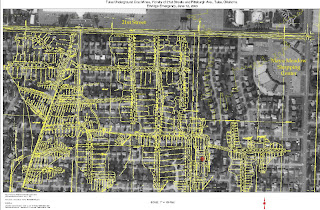 The white rectangle at the top of this is the Expo Building: 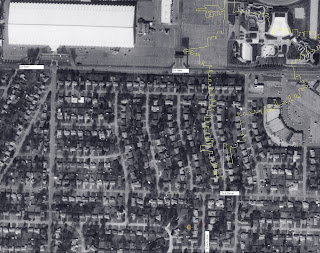 Anyway, now you can see that all of the rumors about the Fairgrounds, Sears, the baseball park etc being on top of coal mines are true.
Posted by Nancy at 10:30 PM

That is all so interesting and I know took lots of time to research. It's so fun to look at the combination of maps and photos. I think my house is just barely out of the "mine zone".

very interesting - thanks for posting this info!

I was raised at 25th & Pittsburg. My brother and I would find pieces of coal in the dirt all of the time.

That's a very interesting research. Coal mining was a common industry before. It became their main source of income. That photo shows how hard it is to work in that industry.

I am currently reading a book by Ron Padgett on old Tulsa. In the book is a hand drawn map and shows an area on north Yale between Admiral and Pine identified as Stokes Farm. I was born and raised on the property from l940-1948 and during that period, the land on the West side, on which I lived, was the Consumer Coal Co. I remember this because my father worked for the company, Directly acroos the street on the East Side was another Coal Co. by the name or either Adamson or McNabb... cant remember.

The Adamson Coal and Mining Company was located at Adamson, in Pittsburg County east of McAlester. I am from McAlester and am interested in the coal mines from the area.

I was metal detecting/ treasure hunting Saturday afternoon Oct 17th 2015 and found a cool token "as you mentioned" the miners used at the stores for merchandise. I found it across the street from Valmont Industries. It was in a yard of an old house that was recently demolished and cleared.

How do I post a pic of the token I found?

The Lucinda Hickory coal mine is both very interesting and rather significant as it harkens back to not only Tulsa's effective founding in 1836 but all the way back on the Trail of Tears to the Creek homelands in present day Alabama. Lucinda was the great granddaughter of Tuckabache. Tuckabache is immensely important in the history of Tulsa. I think we need a website devoted entirely to Tuckabache. His personal story reflects the history of Tulsa from its beginnings at Tallassee, AL(Mvskoke "Tvlvhassee" from where we derive "Tulsa") and its daughter town Locvpokv (today a city in AL called Loachapoka). Tuckabache would have come out on the Trail fo Tears with the Locvpokv in the fall of 1836 and likely would have been present at the Council Oak Tree near today's 18th and Cheyenne where the tribal town reignited the flame of their ceremonial fire and thus founded "Tvlvhassee-Locvpokv in Indian Territory in 1836. Tuckabache would have helped rebuild 'Tvlvhassee-Locvpokv with remarkable exactness to what it was in the Alabama homelands. He served in the Civil War and lived to see the incredible transition of Tulsa from Creek town to the Oil Capital of the World. Tuckabache received his 160 acre allotment on the land where the majority of The Gathering Place is now being constructed. He had his cabin at the intersection of Hazel and Cincinnati and when he died in 1910 he was buried in his family cemetery near 28th and Cincinnati. His grave and many others were moved to Oaklawn cemetery in 1922. His headstone and that of some of his family members are still in Oaklawn today. When he died in March, 1910 newspapers throughout OK carried his obituary with the notation that his passing was comparable to that of Geronimo. Lucinda Hickory (b. 1898, d. 1913) was one of four children of Jennie Hickory (nee Coney) and Thomas Hickory. Lucinda received her 160 acre allotment in 1901. The allotment covered the area bounded by the area starting at 21st and Harvard, running east to Pittsburg, then south to about east 25th Place, then west to 25th and Harvard and back north to 21st and Harvard. Way more to the story but time and space doesn't permit telling it all here.

My dad had the Hickory Coal Co. 21st street and then Dawson. On the one photo his name and brother are misspelled. It's
Podpechan. Interesting history though.

Was there ever a strip pit, at 11th & Peoria? It's now Oaklawn Cemetery. Tulsa Oklahoma