Reading about them tearing down one end of the grandstand at the Tulsa Fairgrounds made me think about a trivia question I once asked on Facebook.  It was one of the "where am I?" where I show a random photo.  This was the photo in question that day: 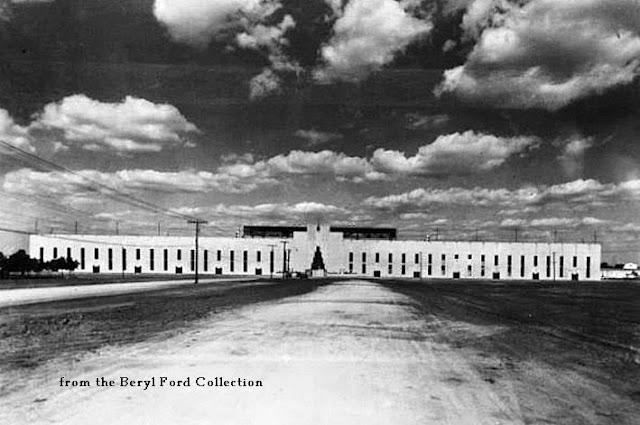 The answer is:
This was the Merchant Exhibit and Grandstand Building at the Tulsa State Fairgrounds. Designed by Bruce Goff, it was built in 1930 beneath the existing grandstand which was 685 ft long and 100 ft wide. This was the longest building of its kind west of the Mississippi River. The building was lost when half of it sank into an abandoned coal mine.
Did you catch that last sentence?  Yes, it sank into the ground!  Much of that entire area, including where Sears sits, was used for coal mining.

I plan on writing some about these coal mines in the future.  There were quite a few.

Many years ago I had a conversation with a elderly gentlemen who was receiving Black Lung Benefits from the Dept of Labor. I was curious where he had worked as an underground miner. Much to my surprise it was Tulsa. He told me the entire fairgrounds area between Yale and Harvard had coal mines running underneath it. M Terry

I have maps and information about these coal mines that I will share once I get them all sorted out.
Nancy

I have seen some of those maps. It is my understanding the the original site for St. Francis Hospital was to be where Sears is currently located. However, it was determined that the ground would not support such a structure, due to the coal mines running beneath the property. I grew up about a mile south of the fairgrounds. It will make a great story and I can hardly wait to read your account.

I hadn't heard about them digging up a piece of the old grandstand, but if they did it wouldn't surprise me!

I think these old coal mines many years later have caused homeowners reaaly bad problems. foundations are sinking and insurance companys wont cover the rpairs. My mom's house is sinking and there's nothing she can do but walk away from the house. It's sad!