A Visitor From Above

At 1:40 pm on a sunny fall day in 1928, shrieking sirens went off in the West Tulsa refineries.  They were announcing the arrival of the Los Angeles.  "Queen of the American Skies", the naval dirigible was the guest of Tulsa for a few fleeting minutes that Tuesday as it leisurely swept over the city. Coming from Ft. Worth, the second largest ship in the world at the time was on it's way "home" to it's mooring in Lakehurst, N.J. 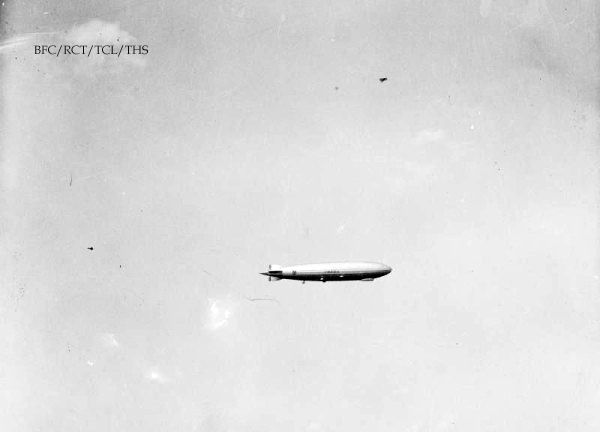 Greeted by an escort of eight Tulsa planes (those are the dots in the photos), the dirigible was first sighted far south of Tulsa, hanging low over the Sapulpa hills, by thousands of Tulsans.  They could see it from rooms and windows of office buildings, from Reservoir Hill, from Riverside Drive and beyond.  As it made it's way towards the city, it swung to the west to circle over the downtown area. 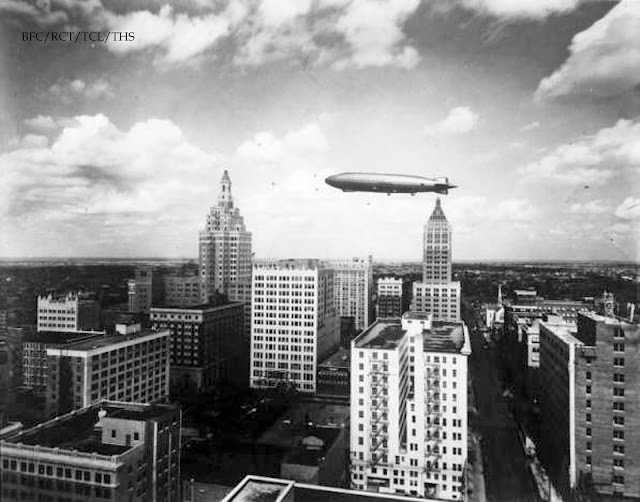 People scrambled to the tops of buildings as it dipped low to an altitude of 900 ft. using only 2 of its 5 motors. They said that every detail and marking could be seen in the brilliant sunshine and that it appeared to be as low as The Exchange Building -the tallest structure in the state at that time.
Tulsa World photographer Lee Krupnick stood on top of the Mayo Hotel and took this photo. 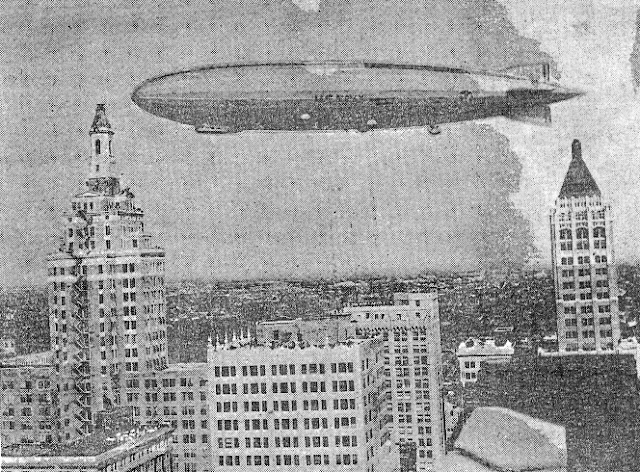 If you squint your eyes, you can perhaps see the people standing on the buildings.  Wish I had a better copy of this photo.
To Tulsans it was the pride of the U.S. Navy but to one resident it was more.  Lt J. Benam Carter had been a member of the ship's crew for the last 3 years.  His aunt, Mrs. Hunt, lived on East 18th Street  and the dirigible's course took it almost directly over the Hunt home.  Spotting the house, Lt. Carter dropped a note of greeting addressed to his Aunt and Uncle which landed near their residence. An observer picked up the message and delivered it. 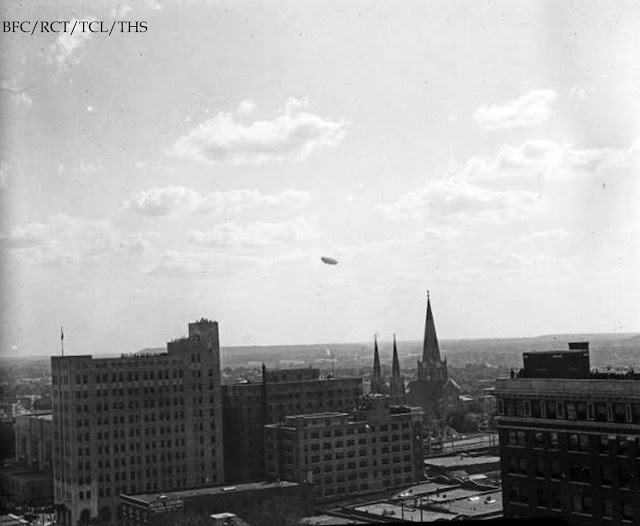 And with that the ship which had once crossed the Atlantic headed on towards Kansas City.
Posted by Nancy at 10:56 PM

Just looking at the photos, it's interesting to note how many of Tulsa's definitive buildings were built by 1928 and how many are still in use.

Wow, incredible post. I'm glad so many pics were taken of the airship.

Photos of the Los Angeles from Boing Boing posted two days ago:

"There's more than one way to wreck an airship"

"This photo was taken on August 25, 1927, after a sudden change in the wind direction caught the back end of the moored Los Angeles.

"Within moments, she was completely vertical."

Tulsa TV Memories' take on the NBT building and the Los Angeles is here.