Glenn Condon was born in 1892 to George and Mary Condon.  After graduating from Oklahoma City common schools (8th grade), he worked as a messenger boy for Western Union which was also the source of the Oklahoma City Times-Journal's stories. Glenn's brother happened to work for said newspaper as a pressman.  One day his brother told him to standby, that there was going to be an extra out on the San Francisco earthquake. Glenn was the first kid out on the streets with that extra and was bitten by the journalism bug.

He came to Tulsa in 1907 and worked as a bundle wrapper, a soda jerk and at a vaudeville theater called Egan's Roof Garden which was atop the building that also housed the Beane-Vandever dry goods store. 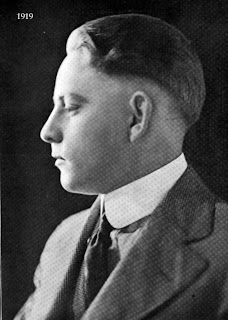 Condon finally got up enough nerve to ask the editor of the Tulsa Democrat for a job- any job that he had to offer.  Having only an 8th grade education he was given the job as a printers devil.  His duties included sweeping the floors and being the editor's gopher.  Glenn liked to tell the story of his first assignment as a cub reporter for the Tulsa Post (at age 17) covering an evangelistic meeting being held in a tent.  He took his place at the press table, proudly "making" like a reporter, when a woman approached and asked, "Young man, are you a Christian?" to which he replied, "No ma'am, I'm a newspaperman" without realizing how it sounded.  In 1911 Glenn covered the only legal hanging to occur in Tulsa.

While working for the Tulsa Post, he inaugurated one of the first sports columns and became their Sports Editor.  Then he went to work for the Tulsa World performing, at one time or another, all of the news jobs there; police reporter, telegraph editor, city editor and managing editor-all before the age of 25.  During this time his boss was  Eugene Lorton who would later become the newspaper's publisher.

In October of 1911 Tulsa was preparing for their Second Annual County Fair and the First Annual Industrial Show and trade week.  The Tulsa Daily Democrat reported that aviator Leonard Bonney would be arriving:

Bonnie, the daring your aviator, who has been making successful airship flights at the Muskogee fair and other exhibitions during the past summer will arrive here in a special car from Muskogee this morning. His airship, a Wright biplane, will be immediately taken to the fair ground and set up. A flight will be made on the fair grounds today. Bonnie is the first aviator to carry passengers in his machine in this state, performing this feat in Muskogee last week when he took a member of the State Board of Heath up in the air with him.


Eugene Lorton had wanted to go up in one of those flying machines for quite some time and won a chance to do just that.  The Tulsa World was "published from the air" that day: 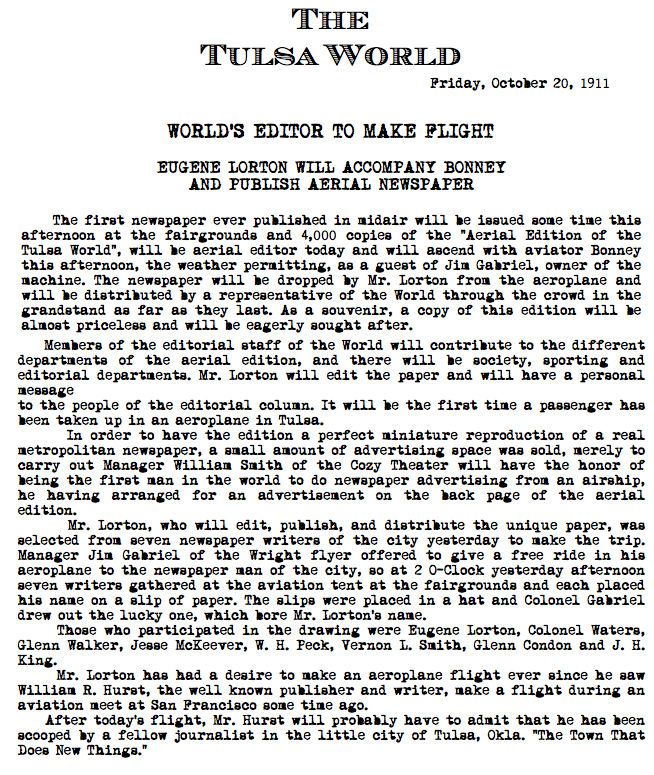 What Mr. Lorton didn't learn until 15 years later was that every piece of paper in that hat had his name on it.

It was Lorton who encouraged Glenn to run for the House of Representatives seat, which he did and won in 1916.  He resigned in 1917 to visit Europe on a war mission for the state, coming back to Oklahoma to promote the state's war efforts by making more than 300 speeches in every county.

After the war Condon became editor and publisher of the Vaudeville News in New York.  He gave cub reporter Walter Winchell his first job there, before he became known as a gossip columnist.  Ironically over the years, many said Glenn, with his staccato speaking pattern,  sounded a lot like Winchell over the airwaves. Perhaps it should have been the other way around.

Returning to Tulsa in 1926, Glenn managed the Ritz and Orpheum movie theaters and later the Majestic.  According to notation on this photo, this is Glenn interviewing Gene Autry on the Orpheum stage, however it is not confirmed that this is in fact Mr. Autry (see comments below): 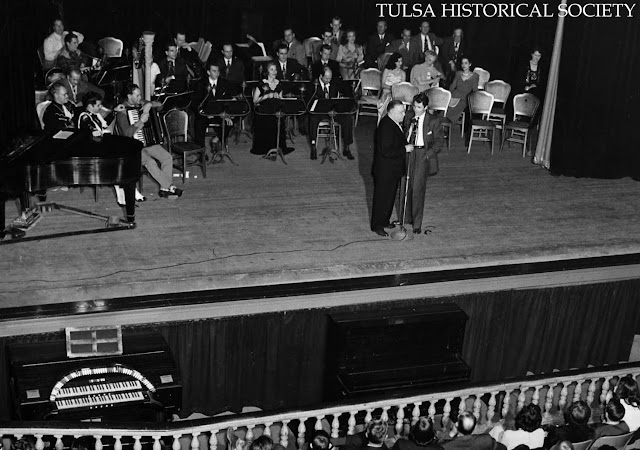 During the World Series games, he would shout the play-by-play of the game from the 2nd story of the Majestic  as it came in over the wire to the crowds below.

He went back into broadcasting helping to organize stations as KOME and KAKC- with the "C" standing for Condon ("A" was for Avey, "K" was for Kellogg and later King).  The majority of those alive now probably recall him as news director for KRMG when it went on the air  Christmas Eve 1949.

Glenn was a popular speaker at functions all over the city with many interesting stories to share.

In his Only In Oklahoma series, Gene Curtis recounts:
Condon…once introduced a public official as "the only Tulsa County Commissioner who hasn't been indicted."  When the laughter died down, he added, "yet."

Another of those stories was about a tall, thin, soft-spoken Indian by the name of Henry Starr. 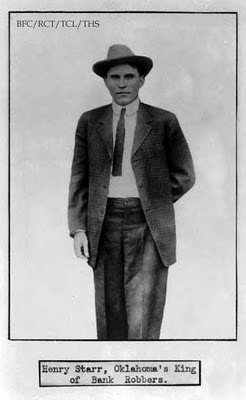 Henry had a price on his head and had been undercover for about a year.  One summer day, Henry and his gang rode out of the Osage Hills and headed towards Stroud, OK.  At the edge of town they split up with carefully made plans to rob the town's two banks at the same time.  A 16 yr old grocers son, firing from the back of his dad's store with a .22 rifle, winged Henry in the leg as the outlaws rode out of town.  Henry fell from his horse and was captured. 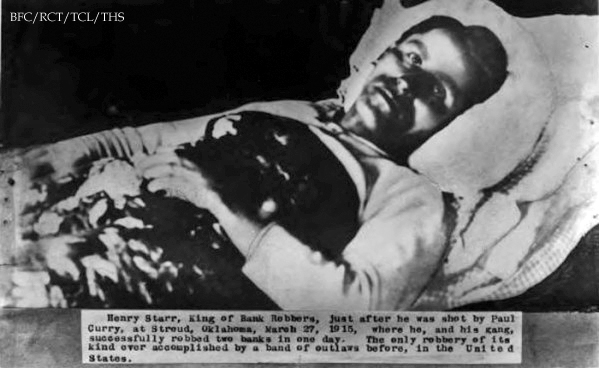 He was taken to the Lincoln County jail where he sent for a few Tulsa newspapermen (Condon being one of them) and shocked them all, telling them that he had been living in Tulsa all of this time in a rented house a block from the sheriffs home and two blocks from the mayor.  He gave the newsmen his keys to the house and in it they found everything just as he had described.

Glenn Condon was one of the proudest Tulsans I think I've ever read about.  With good reason though.  He had lived here during the birth of the city and had seen and been a part of it all.  From the Commercial Club Booster trains that went to state capitals in the East (which he called "audacious") to the knock-down newspaper fight between titans Eugene Lorton and Charles Page over Tulsa's water.  He saw the building of the bridge that essentially brought oil to Tulsa and thought the sign erected over the top of it epitomized Tulsa's spirit.  "You said we couldn't do it but we did."
He never failed to recognize how many, if not all, of the wealthy oil men "put their money where their mouths were" and gave so very much back to the city in the form of museums, parks, airports, buildings and more.

In other aspects of his life, Glenn was active in the Parks Department, served on the Tulsa State Fair Board, the Tulsa Press Club, the Rotary Club- you name it, it seems as though Glenn was a part of it.  Which is why he was honored in July of 1964 by the Tulsa Chamber of Commerce upon his retirement after 57 years as a reporter.  This tribute to a self-made newsman humbled him greatly and sealed his belief that Tulsa was the greatest city on earth.

This is a great piece. I remember Glen Condon on KRMG when I was in high school in the 50s. The link to his peon to Tulsa is really interesting. The history of the Tulsa name is new to me. There is a bit of the snake oil salesman to it but then Condon was a great salesman. Good stuff!mandster

Nancy, I love this piece. I never knew that Glen Condon had managed some of the downtown theatres. I have only one slight correction. The photo with Gene Autry was taken at the Orpheum, not the Majestic. I know because I worked at the Orpheum in the late 1960s and the Orpheum Wurlitzer is now playing in my basement (with digital sounds). Keep up the great work. I love your blog!

Duly noted and corrected! Thanks so much Dennis.

Glenn Condon was my great-great uncle.

Just wondering where that the man being introduced is Gene Autry came from? It doesn't look like other pictures of Gene Autry from that time period. The geneautry.com site doesn't show a personal appearance in Tulsa for that year, and when it does show Tulsa it never shows the Orpheum as the venue. Just asking. Jlcavitt@hotmail.com

The "interviewing Gene Autry" photo is in Glenn Condon's collection at the (Tulsa Historical Society) museum. I was going by what the photo had written on the back of it.

A group of us have been trying to correctly identify the gentleman mis-identified as Gene Autry. One suggestion is Mario Lanza. He was in Tulsa in 1949 and does resemble the man in the photo.

While doing research on another subject, I found an article by Mr. Condon in the July 1918 Rotarian, available on Google Books. His article is titled "A Rotarian in France" and begins on page 5. The link for the magazine is:
https://books.google.com/books?id=hFgEAAAAMBAJ&pg=PA5&dq=the+rotarian+1918&hl=en&sa=X&ved=0ahUKEwjLuKagk47TAhUUG2MKHfo0D0MQ6AEILDAE#v=onepage&q=the%20rotarian%201918&f=false

Thanks Jennifer! Always interesting to read these.