Statehood Day: How The News Came To Tulsa

This was how the word reached Tulsa, via Elmer E. Louderbach, local manager, of the  Postal Telegraph. Postal had made special arrangements to have ready a through wire from the White House, connected with their offices in the new state. In Tulsa  Manager Louderbach had made arrangements with several of the power plants equipped with large steam whistles to be ready for the signal, and the telephone operators were pressed into service for the rapid transmission of the word to turn loose the noise. A messenger was posted at the phone in the telegraph office, and as the awaited message began ticking, a signal from the operator at the key sent the news speedily about the city. Thus it was that the whistles and bells and guns began their joyous clamor but two minutes after President Roosevelt actually signed his name to the proclamation of Oklahoma as one of the United States of America.

The great bell in the fire station was the first to break the morning stillness and  before the second stroke was heard a perfect bedlam of noises broke loose. Two mighty  engines on the Frisco tracks set forth their shreiking (sic) and joined in the clamor which  was in progress. Bells of every kind gise (sic) and description joined in the din and naught  but the shrieking of whistles and the resounding tones of the bells could be heart. (sic)  For l5 minutes this burst of enthusiasm, and out of the uproar could be heard the clang  of the fire bell measuring off the 46 strokes....

From the flagstaff of the high school building a magnificent new flag, dotted  with 13 stripes and l6 stars swung out into the morning air, and from all parts of the  city flag exercises of a similar nature were carried on. Those that had not the flags with the 16 stars dug the ancient banners from the hiding places and sewed  the brightest and newest star upon "Old Glory”. At 1:30 the parade which had been forming on Boulder Avenue got under way and filed slowly up Boulder to Sixth Street.

Down Main Street came the procession, led by little Vernor Terril dressed in a  suit of red, white and blue, representing the new state in a carriage with D.C Rose  and J..M. Hall. Then came the Commercial Club band, some 40 in number, catching the  crowd with a quick step. A ripple of applause ran down the line and in appreciation  the band struck up the "Star Spangled Banner” and a storm of cheers greeted the  great national air.

Following the band came the representatives of union labor in Tulsa, keeping perfect step with heads erect and maintaining an excellent line of march. One after another the unions filed by, some 200 in all, each member wearing a statehood badge.

The carnival band, which had generously donated their services for the occasion came next and kept up the applause with popular airs. Then came the school children in gaily decorated wagons and they too were greeted with applause.

The children evidently enjoyed the spectacle as much as those who lined the streets  and kept up a never-ending stream of cheers.

The fire department with Chief Alder and Lieut. Hall came next in order and after them the shining wagons of the department. The prancing steeds evidently felt the greatness of the occasion and the sturdy drivers were kept upon their feet throughout the line march holding the steeds in check.

Eleven student representatives of the Bartlesville high school and Tulsa Business College teams came next in line, garbed in the peculiar raiment of the football field. Whenever a bevy of maidens greeted their gaze they whooped it up generously for their schools and were rewarded by a pattering of hand claps.

A never ending line of carriages bearing the representative men of the city, their wives and citizens followed, a great many of them gaily decorated for the occasion.

After the parade had completed the line of march it disbanded at the Grand where a throng had assembled to hear the statehood orators. Thomas B. Lyons, a young attorney affiliated with the firm of Martin & Rise, delivered the principal address. Christopher Kreiger, representing the labor organizations of the city, spoke on behalf of the cause of labor, telling what statehood meant to them.

The was the mayor of Tulsa at the time of Statehood: 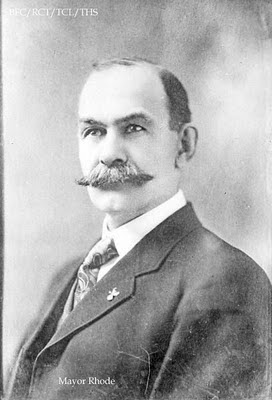 And of course there was a photographer set up on 1st and Boston who snapped this photo of some Tulsa cowboys on the historic day: 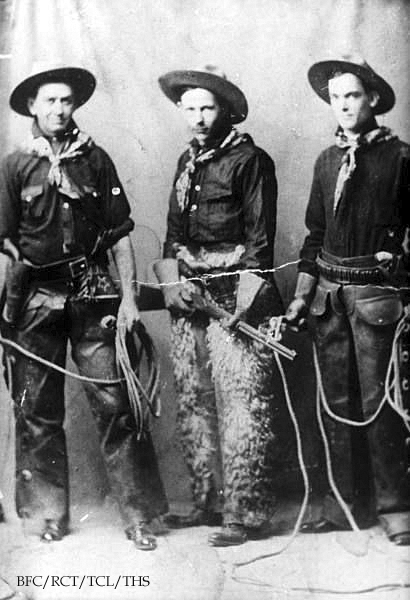