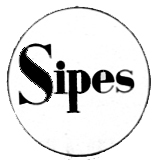 A.H. Sipes began his grocery store business in Oklahoma City (1909) and came to Tulsa in 1927.  They were known to be one of the first stores to bring self-service grocery shopping to Oklahoma yet maintained the nostalgic warmth of a neighborhood grocery store even when they expanded.
Personal Memories

Going to Sipes was a Saturday afternoon tradition for my dad and I.  We would leave around 10:00 a.m. (shopping list -written by Mom- in hand) and go to his office which was down around 13th and Boulder in a renovated house (later taken out by the expressway).  I would doodle around amusing myself on some poor secretary's typewriter while he worked.  Then we would head over to Ike's Chili Parlor (the last location downtown at 7th and Boston) for 3-way "Spi-get Special" (this was how they pronounced spaghetti and chili with beans and cheese) and a coke served in a paper cone cup in a metal holder.  It was always interesting to sit at the counter and just watch the people working or watch Ollie ring up people at the register by the door.  Then off we would go to Sipes for the weeks groceries.

My parents' first house was over by the fairgrounds, so the 27th and Harvard location was where we went, even after we moved way out south.  Dad occasionally went to the Sipes at 61st and Yale when it opened but always preferred the Harvard location.  I think it was because he knew the butcher there on a first-name basis. When we would reach the meat department, Dad would give me a dime and I would head over to the Coke machine and get a chocolate Yoohoo and wait.
If it was summertime, there would be much discussion about loin back ribs, pork chops and steaks for cooking on the Hasty Bake.  If it was winter time, Dad had to choose the right piece of meat and right amount of suet for his chili and have it ground 2-3 times. I'm sure no Tulsa child will ever forget the cartoon/movie "hut" that children were sent to to wait while groceries were being sacked and paid for. Getting a penny to buy a piece of bubble gum from the machine and watching a cartoon for 10 minutes was a great way to end our weekly excursion.  My parent's were very loyal Sipes customers.  Mom even did some advertising modeling for them in the 1950's. 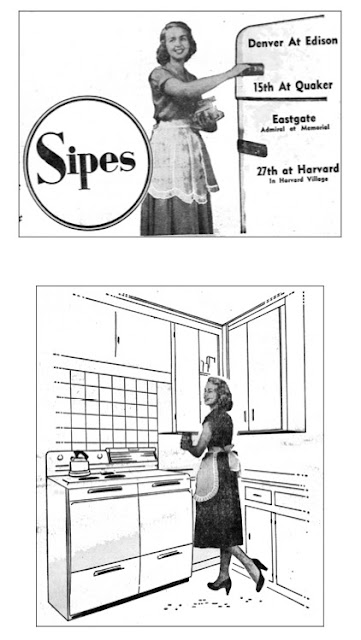 These were small stores without much parking needed since few automobiles were on the streets back then.  After WWII, only 2 of those stores were paying operations.  In 1943 son LeRoy Sipes became general manager and bought a location at 15th & Quaker for a larger, more up-to-date super-market.  (This building still stands and is a restaurant). 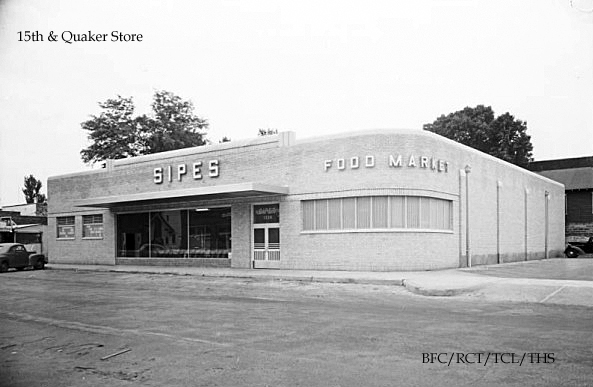 The 10,000 sq ft facility was the first of five Sipes stores built on the grand scale customers were beginning to demand and included a drug store. 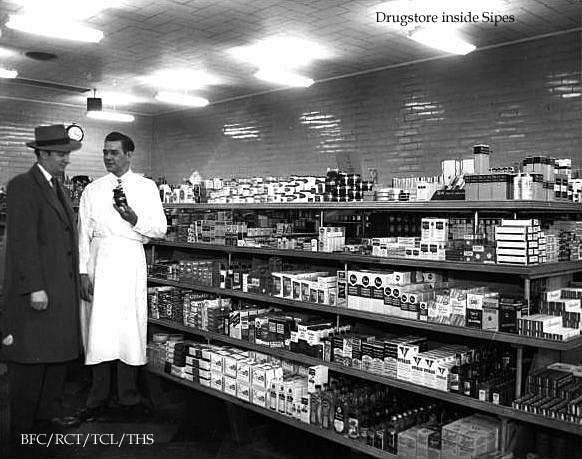 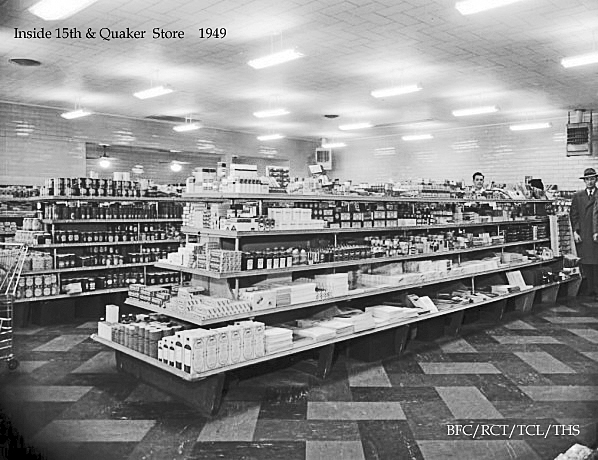 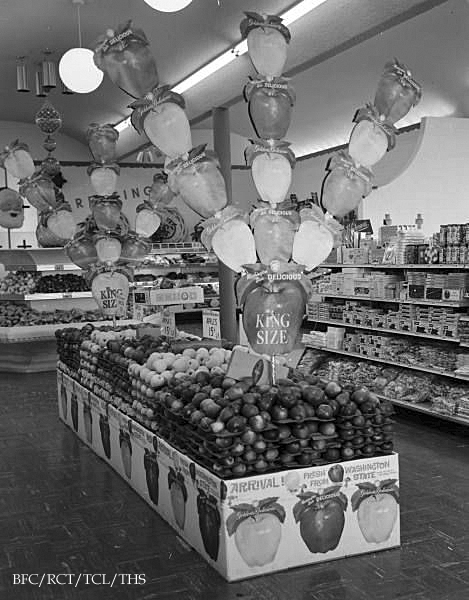 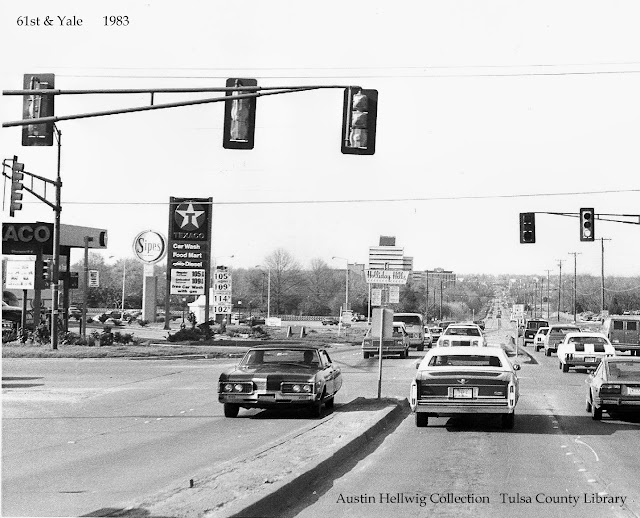 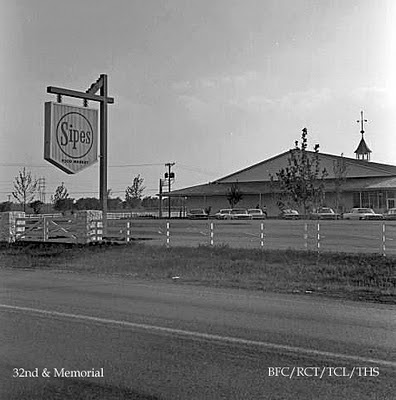 Hale-Halsell company acquired Sipes Food Markets in 1955 which probably helped the chain outlast many others for decades.  In the early 1970's there were plans to open a store on the northwest corner of 71st & Memorial that fell through.  It was supposed to look like this: 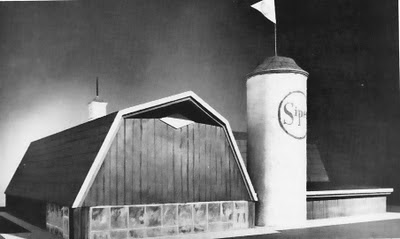 I grew up around 28th and New Haven, so the 27th and Harvard location was a special place for me as well.

I worked at 27th and Harvard during High School. It was a great place and lots of great people.

I really enjoyed seeing the Sipes pictures and story. I worked for Sipes from 1962 till 1980, managed three of the stores. I loved working there and will always remember "the customer is always right policy". Today I still pay attention how the stores like Reasor's and others are operated. Sipes taught me a lot!
John Roop

Thanks for the nice comments everyone! They really do mean a lot.

I was receptionist then office manager and secretary for David Sipes and LeRoy Sipes at Sipes Food Markets in the 1970's. The corporate offices were behind the Memorial store (now Drysdale's). The interior of each of the stores and the corporate office was decorated by an interior decorator from Wichita, KS. Sipes was the first grocery store to bring scanners to the checkout in Tulsa. They published recipes in their newspaper ads and eventually published a cookbook which was a compilation of those recipes. Mr. Charles Wentz was the grocery buyer and later Mr. Ray Todd filled that position. Mr. Curtis Mann was General Manager and Meat Buyer. A portion of the land where the proposed 71st and Memorial store was to be located was sold to Toys R Us and that store was never built. However, a store on 71st was built in the 70's. David Sipes built the Kensington store just west of Lewis on 71st, located at the east end of what was then Kensington Mall. When I was employed there in the 70's, I seem to remember that Hale Halsell owned a controlling interest in Sipes Food Markets, and the family retained 49% interest. I also seem to remember that the Memorial store became or it was planned to become a "box store" sometime in the 80's. It was later, also sometime in the 80's that Hale Halsell bought the family's remaining interest. Hale Halsell also owned Git n Go stores. Sipes was a great company and a wonderful company to work for. Thanks Nancy for posting the Sipes story.

Wow, thanks so much for the additional information Donna! I completely forgot about the Kensington store until you mentioned it!
Nancy

Hey, what a cool post! I worked at Sipes Harvard Village for 6.5 years during high school and college - it was such a fun job to meet and serve so many great people, and was "back in the day" when work wasn't so stressful. Enjoyed my time there in 1980 to 1986. Have only had TWO jobs since then in my entire career! Miss those days. John Pittman

This brings back memories. I worked at the 71st and Kensington store for a number of years before transferring to the 51st and Sheridan (I think...after all it was 20 yrs ago, lol) store. Worked there while attending ORU.

This brings back memories. I worked at the 71st and Lewis store (Kensington) for a number of years before transferring to the 51st and Sheridan (I think...after all it was 20 yrs ago, lol) store. Worked there while attending ORU.

My father, John Coultis, is the Interior Designer from Wichita who worked with the Sipes while I grew up. Leroy would send us two bushel baskets each Christmas which I remember fondly 40 years later. Sipes was a classic!

Who won't forget the Cartoon Hut at the front of the 61st/Yale store. Old B&W toons like Popeye and Mickey Mouse being projected on a tiny screen. By today's standard, terrible quality...but back then, terrific.

My name is Michael Thomas, from Trinidad and Tobago.

While I attended TU, I worked with a great girl named Liz Sipes at Bongo Sylly's restaurant on Boston Ave, Tulsa in 1980.

I think she was related to the supermarket owners.

She made an excellent quiche and loved to cook.

I worked for Sipes for 16 years, divided between 27th & Harvard, Holliday Hills, & Kensington. I met lots of nice people (customers and employees), and think I could write a book about the adventures of working there. I certainly learned what 'good service' means and how to behave on the job. Wish the concept would catch on today.
Stephanie Stevenson (aka Stephanie Brown).

I worked at Sipes for several years and really enjoyed the experience... I worked there through my high school years and during my early college years.. John Sparks was an awesome manager..

I remember John Sparks. Really liked him. I worked at Eastgate in high school and met a lot of great people. Fell in love with a cashier there. Leroy and David had offices upstairs there and we would occasionally see Leroy and his wife in their Chrysler Imperial setting in the drive-in at Pennington's eating just like everybody else. We used to unload the customer's cart, putting their items on the conveyor belt and a cadre of "sackers" would bag the items up, put them on a cart and take them to the customer's car. Used to make pretty good money in tips and had fun doing it. I helped open the Memorial "Barn", and I worked at 61st/Yale until I got drafted in 1970. I believe at one time that store had one of the, if not the highest revenues of any grocery in Oklahoma. Worked with Bill Newby. We were always proud to be a Sipes employee and I have many fond memories of that time. Mike Phillips

I had several good memories while working at Sipes... Billy Hendricks was one of the best managers I ever worked for.. He was a wonderful man and a great mentor....

Best time of my life... Billy Hurst was my mentor... Best manager I ever worked for...
Awesome experience !!!

Jerry says, my dad worked at the Sipes store at 15th and Quaker in the early 1960's. He worked in the produce area. As kids we occasionally would get to go to work with dad, he would set up wooden produce crates (of which I have still have a few) for us to sit on an color most of the day. Some original brick structures still remain inside. When in town, I enjoy walking around inside and embracing the memories. Fyi, the elevated door in the hallway to the restrooms on the east was the for trucks to unload and a ramp with rollers was at this point into the back storage room. I enjoyed rolling crates down it when dad wasn't watching!!

Love this story!
Thanks

As kids, my brother and I would frequent the Eastgate mall Sipes at Admiral and Memorial. Wonderful, clean, family-friendly place. On behalf of every kid out there, I want to congratulate the genius who suggested installing the Cartoon Cave for the kids. Awesome memories!

I grew up near 41st and New Haven and attended Madalene church. Our Sunday ritual involved going to Sipes 27th and Harvard location after Sunday church. Special treat was my dad buying lots of pastries, pineapple and cherry were grea t and the donuts were heavenly. I believe they also carried a line of BBQ sauce called Old Hickory ( i think). Any way, that sauce was so good you did not need any meat!Great memories