As a reporter once put it:  Aunt Chick was her generation's Martha Stewart.  She pioneered cooking techniques that are still in use today and invented some great products to boot. 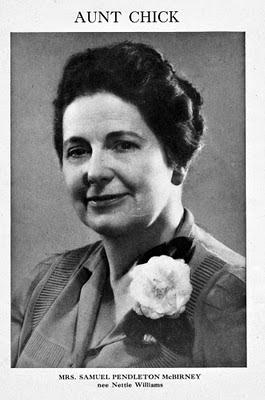 Nettie Williams came to Claremore to teach economics after graduating from the Stout Institute in Menomonie, WI- this was only the second school in the nation at that time devoted to home economics.  After teaching there she became the supervisor of Home Ec for the Muskogee Public Schools.  Then she married Sam McBirney of Tulsa in 1913.  McBirney was the brother of J. H. McBirney who, in addition to being in the banking business with his brother, was also coach of the Kendall College (now T.U.) football team.  The McBirney's bank, National Bank of Commerce, was started in 1908 and because of the oil business, never felt the effects of the Depression as so many did.
In 1935 Nettie decided she wanted to begin writing a cooking column, so she approached the Tulsa World Editor, N.G. Henthorn.  He offered her $15 a week to write the column which appeared Tuesday through Friday on the society page as well as on Saturday in a food shopping guide.  Nettie didn't tell her husband about this new job which she viewed as more of a hobby than work (she later said she would have written about good cooking for free) but when Sam opened up the newspaper  to her first column -which she signed as "Aunt Chick" -he knew it was her as this was one of her pet names.   The story goes that Sam said, "That crazy woman will start a run on the bank if people think she has to work!" before confronting her.  Of course, it didn't start a run on the bank.  Rather a run on newspapers as women loved her cooking advice and recipes.
Nettie had a knack for solving cooking problems plus she listened to women.  She always tested the recipes she published and believed that a good home cook knew more than most experts.  Nettie said she liked the way Oklahoma women made biscuits and fried chicken and said she found it was the kind of flour they used that made the difference.
One of the biggest problems of that time was making a good pie.  Aunt Chick taught how to make wonderful pies with perfect crusts and meringue that didn't weep. She loved teaching and demonstrating and became an international figure not only for her inventions but for organizing  teams of cooks trained to demonstrate cooking which were employed by large department stores in major cities across the nation. 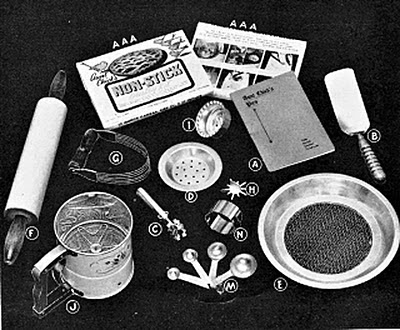 Her wire-bottomed pie pans eliminated soggy crusts and her non-stick pastry canvas was a must for rolling out dough of any kind. There was her Spatulator, her rolling pin with a cover, the heavy aluminum cookie sheets with handles and of course her famous cookie cutters. Aside from making cute, easy to decorate cookies, she patented these molds (that easily release the dough) in 1949.  This was accomplished with little dots on the inside of the cutter as well as there not being any right angles in the whole Merry Christmas set. Fans included Princess Margaret who purchased a set of the Christmas cutters for Prince Charles' fourth Christmas in 1952. 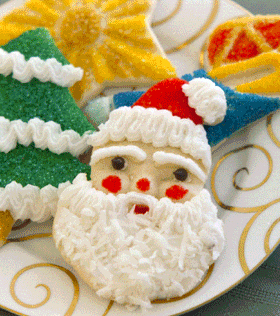 Nettie wrote her column for 20 years, quitting in the early 1950's.   She then devoted all of her time to the business of selling her cooking products. She also wrote cookbooks with the most popular one being this one (my prized possession): 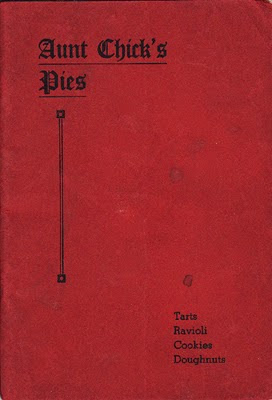 She collected cookbooks, beginning with one she received when she married in 1913 and donated the entire lot of them (about 1,000) to the Tulsa County Library when she moved into a retirement home in 1973.  She didn't stop doing what she loved though; she just had a new venue and audience to demonstrate to. 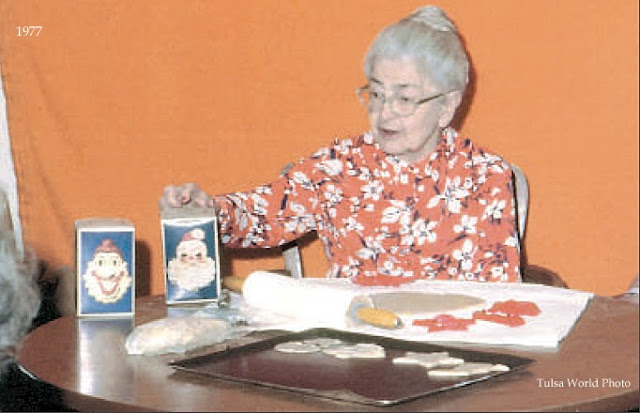 Nettie McBirney died on Thursday, 16 December 1982. She was 96 years old at the time of her death.
---------------------------------------
Carrie Greno had a grandmother herself who brought out Aunt Chick's cookie cutters at Christmas during her childhood.  Wanting to carry on the tradition, she began looking for those cutters and learned that they hadn't been made in decades and that some bakers hoarded them for fear there would never be any more.  She found a Tulsa man who had 18,000 of the original cookie cutters in storage, which she bought.  She purchased a small ad in Martha Stewart's magazine (!) and they sold like hotcakes. After the great response, she contacted Nettie's granddaughter and convinced her to sell the original production molds and in 2004 her new company, Gramma's Cutters was in business.  You can now purchase those beloved cookie cutters again.
You can read some of Aunt Chick's columns from the Tulsa World here.
And for you cookie baker's out there, here is her no-fail cookie recipe:
Aunt Chick's Original No-Fail Cookie Recipe
INGREDIENTS NEEDED:
1 cup shortening
2 cups sugar
3 eggs  4 1/2 cups sifted measured flour
3/4 tsp salt
1 tsp baking soda
FLAVORINGS
1 tsp vanilla and 1/2 tsp lemon or 1 tsp vanilla and 1/4 tsp almond
MAKING DOUGH:
Sift together flour and salt. Cream together shortening, sugar, eggs, salt, flavoring and soda. Combine mixtures and shape dough into an oval roll and wrap in waxed paper or place in plastic bag. Chill at least 2 hours.
CUTOUT AND BAKING:
Preheat oven to 350 degrees. Use a pastry canvas and covered rolling pin. Flour both lightly. Take out 1/4 or less of dough. Keep remaining dough chilled. Roll dough into 1/4 - and 3/8 - inch thickness. With floured cookie cutter, place cutter on dough and press down firmly with fingers all around edges to make sure the entire edge is cut. With spatula, lift cutter and dough. With thumb, rub cutting edge clean of dough. Then, using thumb, gently press dough into design of cutter. Be careful never to press closer than 1/4 inch of edge of cutter. Slap cutter down on table or cookie sheet, and dough will come right out. Flour cutter before cutting next cookie. Bake cookies 12 to 15 minutes. Do not allow to brown. Cool thoroughly before decorating.
NOTES:
If you wish to make colored dough, mix color into dough just before rolling dough in waxed paper. Colored dough should bake at only 325 degrees to help the dough retain its color.
Posted by Nancy at 8:26 AM

I'm so happy tto find this. I have this cook book.It was my Mom's. and she always made her pie crusts from this book. I would love to know more about the cookie cutters.
Thanks
Hazel Hammond
PS My granparents lived in Tulsa and he drove a city bus for years. his nick name was Whitie he had white hair.

Hi Hazel,
Just here is the link to the website
http://www.grammascutters.com/aunt-chicks-cookie-cutters.html