The founding fathers of Tulsa had a brilliant idea for naming our city's streets. Dan Patton (who at various times was city engineer, county engineer and Tulsa's 17th Mayor) is credited for the street-naming system.   Dan and brother Gus Patton began working together as surveyors  on the Government Survey Crew here in 1901. 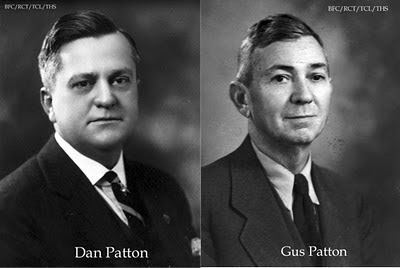 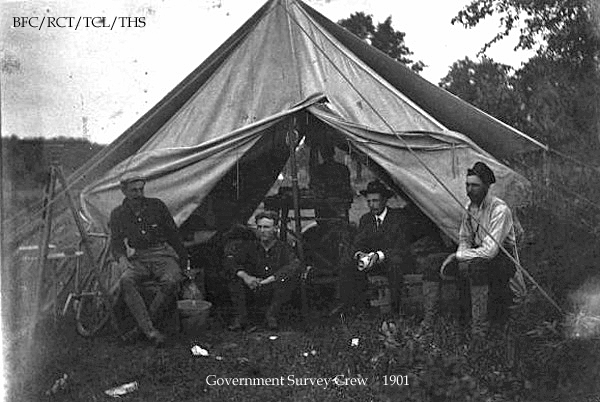 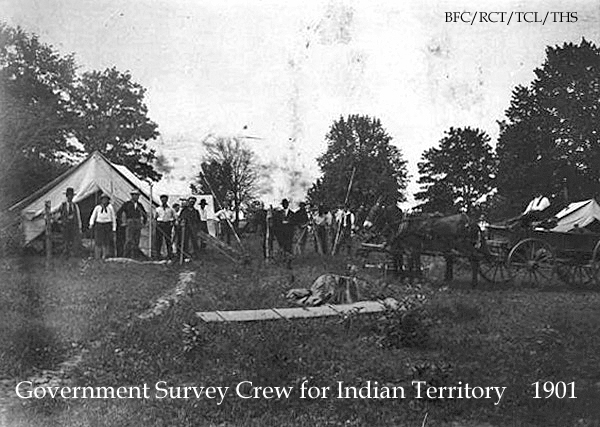 This was the official map showing the street layout. 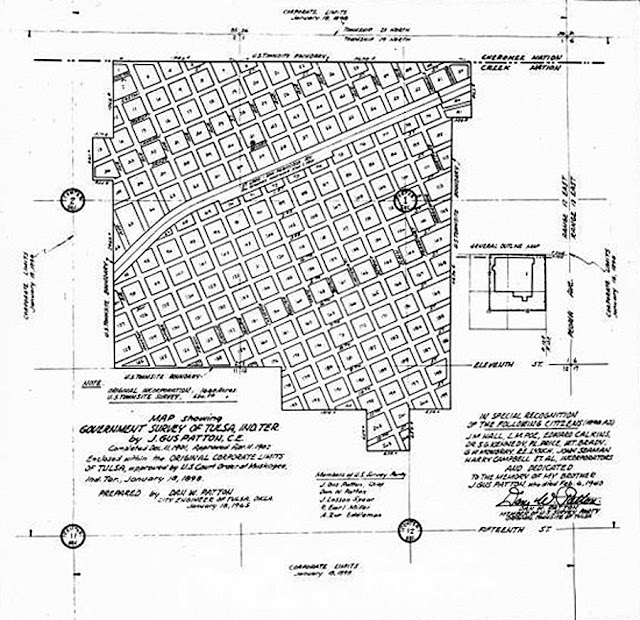 And it was approved in a resolution by the City Council in 1901: 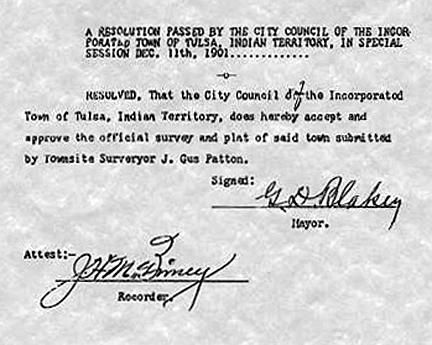 East-west streets south of the intersection of Main and the Frisco tracks would be numbered.  East-west streets to the north would be named alphabetically, preferably for leading citizens.  The first honored was Jeff Archer.  Archer was originally called Cherokee Line Road.  The second honorary street name was for Tate Brady.  North-south streets east of Main would be the names of cities east of Tulsa and the streets west of Main named for cities west of Tulsa.  The trouble was, nobody realized just how big the town would get.
As you can see from the map above, the streets were originally laid out in line with the Frisco railroad tracks.  After statehood, however, the streets were changed to follow a north-south line.  This, along with the city's rapid growth, caused the names of many streets to be changed over a 20 yr period.  Over 200 of them, in fact.  Example: North Peoria was called Pearl Avenue; Archer was originally Cherokee Line Rd; Riverside Drive was called City Boulevard.  Admiral Place was called Jefferson first and then Federal Drive. *
Things first started getting dicey when, because of an irregularity in surveys, two Q streets were needed to the east.  Quincy was an obvious choice, but whoever heard of a town called Quaker?  Then came the X-crisis.  Xenophon and Xanthus are from Greek mythology, and who or what was Xyler? Nobody knows what these guys were thinking, but by the time they got to the end of the alphabet east for the 2nd time, they jumped from Winston to Yale to Allegheny.
The 3rd alphabet east got only as far as Oxford when it ran into an old name for a country road: Sheridan. The city commission undoubtedly decided that that was a fine time to stop the alphabet puzzles and named the street just east of Sheridan   South 64th East Avenue. About the same time they got to the end of the alphabets north and west. They thought for a little while that they might run through the alphabet again to the north and the first street beyond Zion was named Apache. But then they had a  change of mind and the second street is 26th St North. Why it wasn't 27th street, since the full 26 letters were used north of the Frisco tracks, many of them several times, is not clear.  To the west, after Zenith, comes 23rd West Ave. The western alphabet lacks a K street for some reason but you'd think it would be 26th West Avenue. Tulsa street names have many inconsistencies for sure.
Where is the city or town of Elwood? And Galveston and Houston are west side streets....west of the Mississippi I guess.  Many assume that Hartford is named after Hartford, Conn. However,  the Patton brothers named Hartford and Greenwood after two towns in Arkansas (where they were from) with those names.  Harvard Avenue was named for Harvard University, at the request of local Harvard graduates. Local Yale grads were livid so the next section line was named to appease them. In western Tulsa, Mayor Martin (1911-1912) developed a new addition just west of downtown shortly after his term ended.  The city hadn't come up with an "M" avenue name, so he named the avenue after his wife, Maybelle.  Jasper is named for an obscure local businessman Jasper Colley.  S.R. "Buck" Lewis gave his name to one of the city's major streets- out of the alphabetical system- but little is known about him. Terwilliger Blvd is named after the neighborhood's developer, C.H. Terwilliger.
Nobody knows
Why are there three "C" avenues: Cheyenne, Carson and Carthage before Denver?  For whom is Cameron named?  And Waverly Drive? Who was Hazel Boulevard- another street out of order- named for?  Most likely we will never know the answers.  But it's been fun learning about our street names.
*Click HERE to see the full list of street name changes.
Posted by Nancy at 10:20 PM

I think it'll take a couple of reads to digest the details. Once again, an angle of Tulsa I'd never heard of before despite being Tulsa born and raised.

Just found your blog via twitter and love it! Thanks for the investment you are making in Tulsa's past and future!

I got out of the Marine Corp in 1966 and went to work for Flint Steel in West Tulsa. The Brady Mansion had been converted into four apartments and one apartment over the garage that was separated from the main house. I rented one of the upstairs apartments. It had a kitchen, living room, and bedroom with a balcony and a bathroom with a shower. Enjoyed the grandeur and elegance of the old estate! A great experience!

I'm still looking for a namesake of Sheridan. Any ideas other than Gen. Philip Sheridan?
Lorretta

I was watching The First 48 and I kept seeing streets with CT names and references and I wondered if there was some connection. I saw Hartford, New Haven, Yale and Sheriden. To me, those are too many coincidences. In NJ, there are almost as many towns named for CT cities as CT, as CT founded NJ. The city of Cleveland was also founded by and used to be a part of CT. I had gone to a middle school called Sheriden (I think it was named after a female judge - or that might be another school) in NEW HAVEN. There has to be something to this...