St. John Hospital- In The Beginning

In 1919 Catholic order Sisters of the Sorrowful Mother obtained the title to a tract of land at 21st and Utica for a hospital to be built upon and the beginning of St. John Hospital was underway.  The first  spade of dirt was turned in February of 1921 with ceremonies attended by WWI hero General John Pershing. 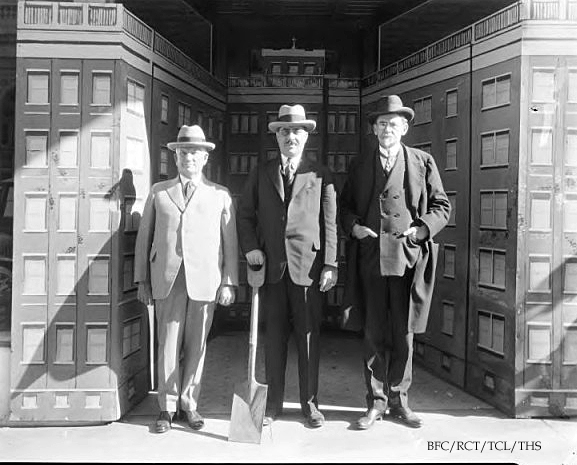 Progress was slow and at times came to a complete halt when funds ran out, requiring the Tulsa County Medical Society to finance a publicity campaign appealing to the public for help.  In 1924 the hospital accepted it's first patients although construction was still going on.  Only two floors were usable then.  The hospital wasn't completed for two more years. 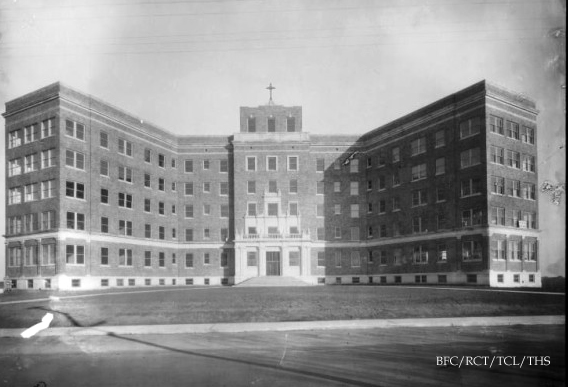 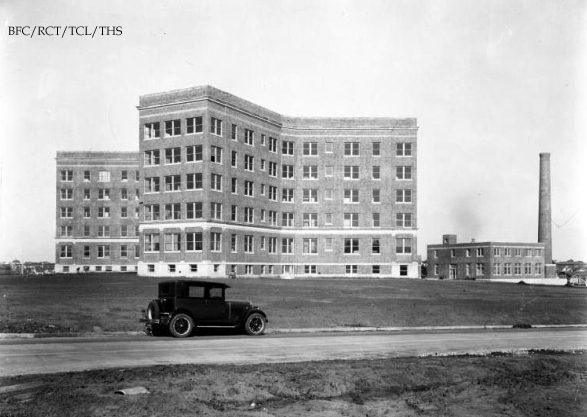 Back in 1980 the Junior League of Tulsa took on an oral history project and the Tulsa County Library has been working on getting them uploaded onto their website.  I shared one of these interviews last year here (this was with a streetcar conductor).  Recently they added an interview with one of the first Sisters who worked at St. John.
The interview of Sister Mary Alfreda took place at the Franciscan Villa Nursing home in Broken Arrow in 1980.  Sister Alfreda was born in 1893 in Bavaria. Her stories of the early days in the crammed hospital are a wonderful peek into the past.
"We had beds all over, in the hall, in the stairwell landings. The machines grinding the terrazzo floors were still going. They were not finished. They kept on building. Strings were pulled through with sheets to private rooms [laughter]. People would accept almost anything. Naturally, the sisters worked happily, cheerfully, faithfully as much as we could. And, we learned as we went, as time went on."
With only 2 floors open at first, the Sisters slept where they could.  As the building rose, so did the nuns' quarters.  There were only 50 beds and a constant waiting list. And then there was the fact that there was no air conditioning back then.  Sister Alfreda recalls:
"Everybody was hot, but we had our own ice plant. So, in the operating room, we always had a basin with a hunk of ice in it and put a bath towel over it. We would ring it out and put it across the doctor’s shoulders to keep them cool while they were operating. That was the cooling system we had. We had to use electric fans, which is certainly against technique. But, it was necessary for living. We operated at times with temperatures in the morning already at 104 degrees. The walls would not cool off because it was just so hot, because there was no air conditioning."

This is one of the ultra-modern examination rooms when the hospital first opened: 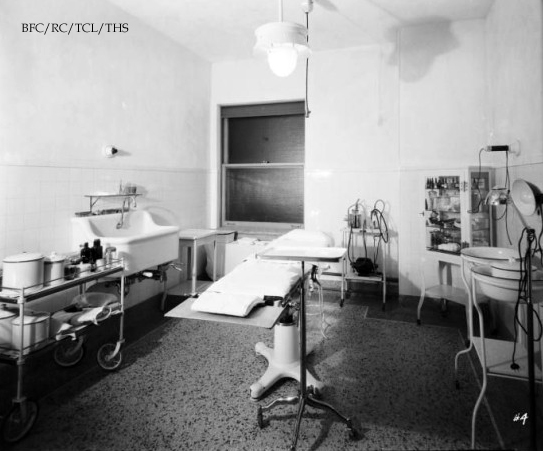 Another story she shared:
"She (Sister Camilla) was the night sister. She was Bahamian by birth. She was kindness and lovable personified. She never refused anything. She never said no. One evening, she had a call from the country. They had a very sick man out there-could they bring him in? “I’ll make a bed,” she said, “bring him in.” This man lived alone, and he would not leave his home, unless he can bring his chickens along. He had fifteen chickens and one big rooster. Sister said, “Can they put those chickens in a crate or somewhere? Tell them to bring the man in because he is so sick.” She wanted that sick man. So, the farmers out there, they made a crate, or had one, and put those fifteen chickens in there, and the rooster, and they put that man and the chickens on the truck, a country truck, and brought him in. So, she had a bed in the hall for the sick man. The chickens were in the north entrance of that little place. When the doctors came in the morning, they were greeted with “cackle, cackle, cackle” [laughter]. Too bad the man couldn’t make it. He died. The sisters inherited the chickens. There were some unfinished grounds around St. John’s. So, they put some little fence around, and the chickens were put out in the unfinished grounds. They were very happy. They were quite an addition to the hospital- the chicken yard. Come thanksgiving, the rooster was the turkey for the sisters’ table. But this little night sister, her name was Sister Camilla, she wouldn’t eat a bite. She did not want that rooster killed. She was so kind. We had fresh eggs." 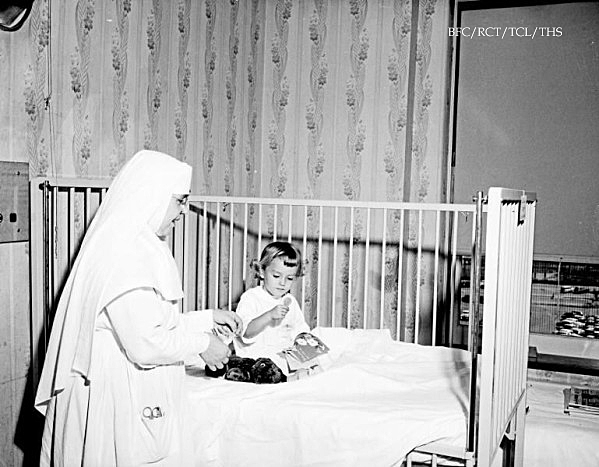 This was the chapel and convent: 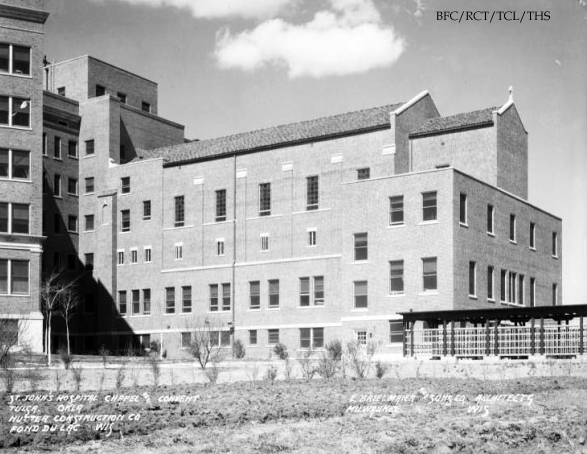 This was the view from the top of St. Johns in 1926, looking northwest towards downtown: 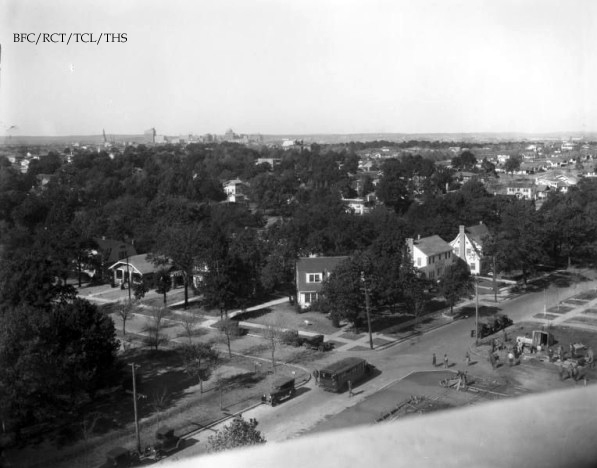 And this was the view on the other side, looking southeast towards what would someday become Utica Square: 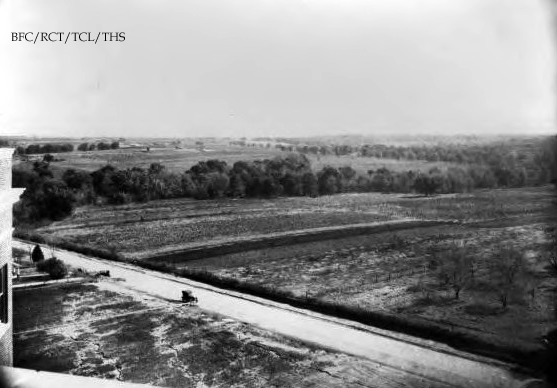 You can read Sister Alfreda's entire interview here.
Posted by Nancy at 9:10 PM

Fascinating. I especially like that first photo and the General Pershing reference.