Ah, bakeries.  Who doesn't love to walk past - or better: INTO - a bakery?  Besides my love, love, LOVE for all things bread, pastry and icing, I also worked in a bakery during my college days.  Actually I worked in a HUGE bakery that made all of the items for the dorms at the university.  I worked from 5:00 a.m. until 11:00 a.m. then rushed to make an 11:30 class where inevitably some smart-aleck would ask loudly:  Does anyone else smell doughnuts? after I sat down.  But I digress.
When working on one of the Historical Society's educational presentations, I found a few photos of bakeries from Tulsa's past that I thought were interesting.
This is the City Hotel - you can't see it very well but it says  "Bakery"  on the sign: 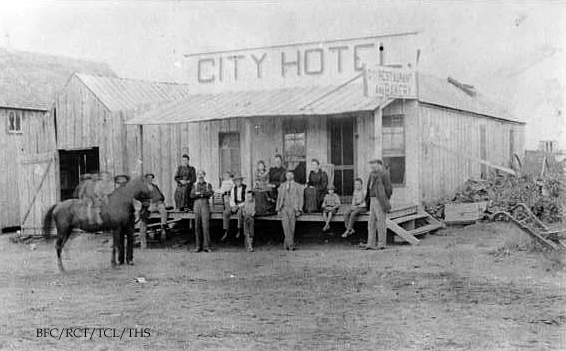 Not sure where or who this was but it there are definitely breads and pastries here (along with deer horns) : 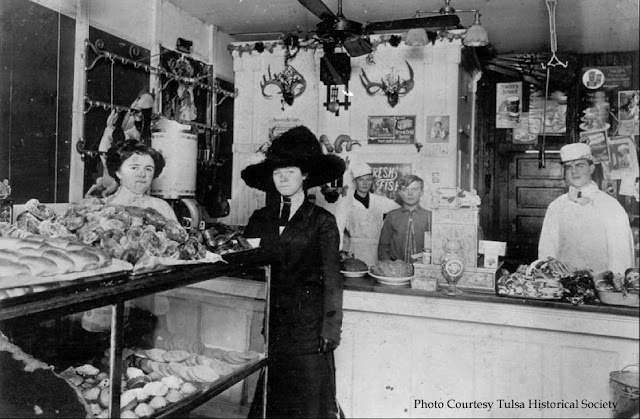 Over the years, as cake decorating has become an art-form, it was once very fashionable to have them made to replicate buildings. Here are two such cakes: the first one was made for the Tulsa Club: 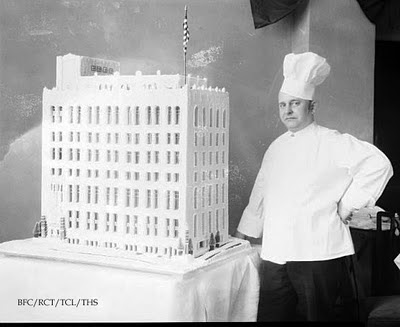 and the Alvin Hotel: 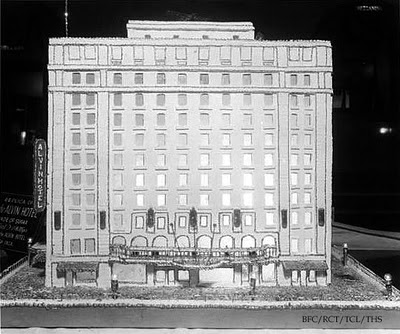 The year was 1929 and this was Annie, age 23, posing in front of the Smith Bakeries truck (before she was married to Ray Bay): 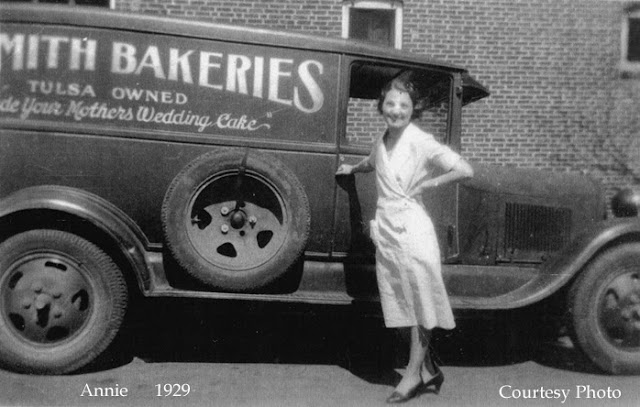 In 1937 Alabama Marshall's son Paul Marshall and his wife Lilah came to Tulsa from Texas and started a full-fledged pie-making business.  Bama Pies is located at 11th and Delaware and started out in a (converted) house. 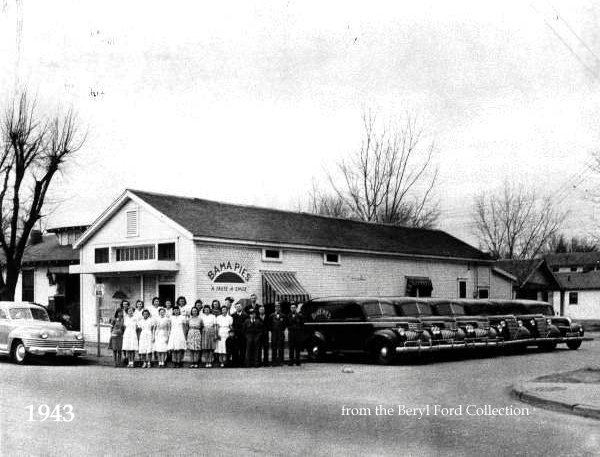 The next year, 1938, is when Ray and Ann Bay opened their bakery, Ann's.  They bought a house at 7 N. Harvard,  had it raised and a bakery  built underneath it. 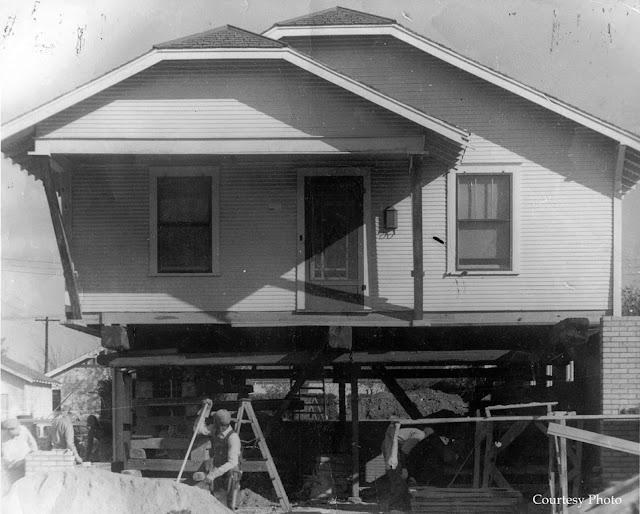 During this building period they ran their bakery from a temporary location on 11th Street.  They moved into their new home and workplace sometime before 1940. 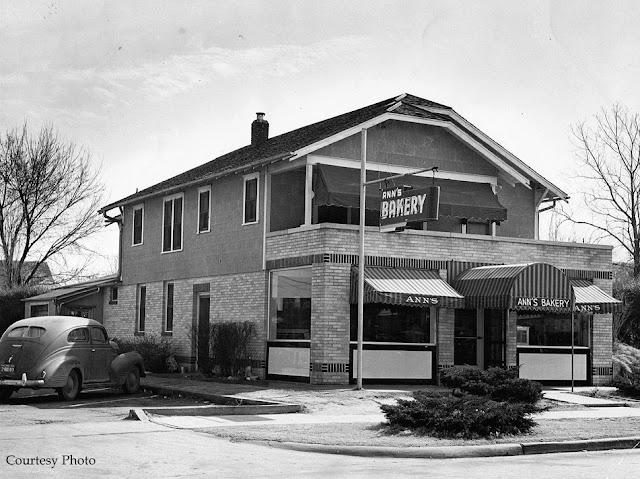 In the early years, Ray Bay was the baker and cake decorator while Ann worked the front and handled the books. 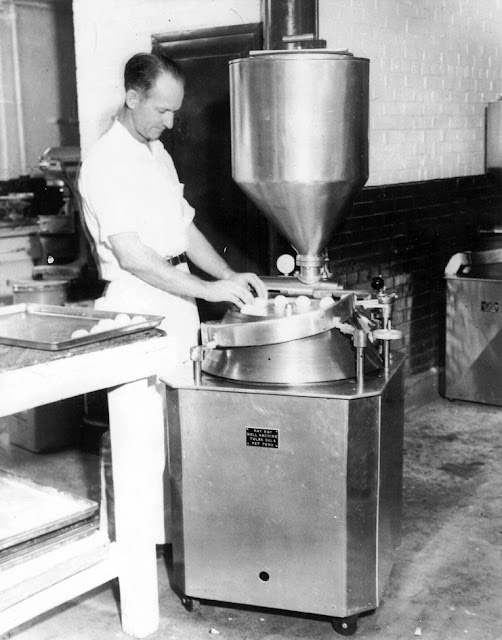 After much success and growth, Ray had to pass on the cake decorating to Ann and others who came to work there.  And so the family -and the family business- began.  This photo was taken sometime in the late 40's or early 50's.  Yes, it's a bread line but not from rationing.   (note the little girl looking down; that is little Sharon Bay) 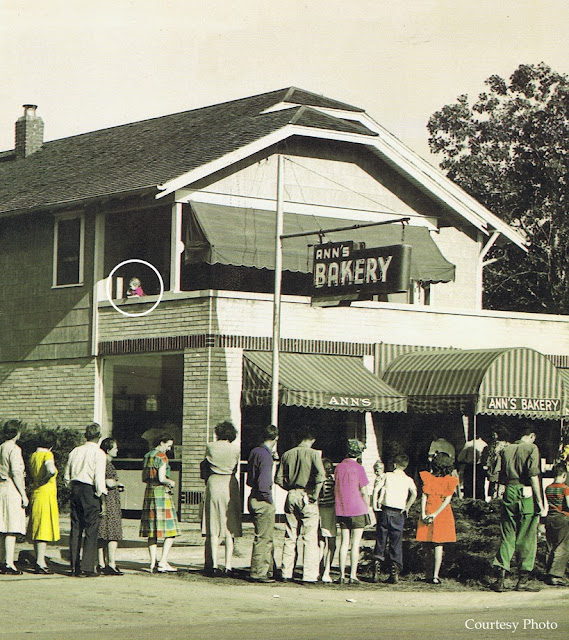 The workers at the large bakeries (Wonder and Rainbo) that supplied bread to grocery stores were on strike, so Ann's bread was in great demand. 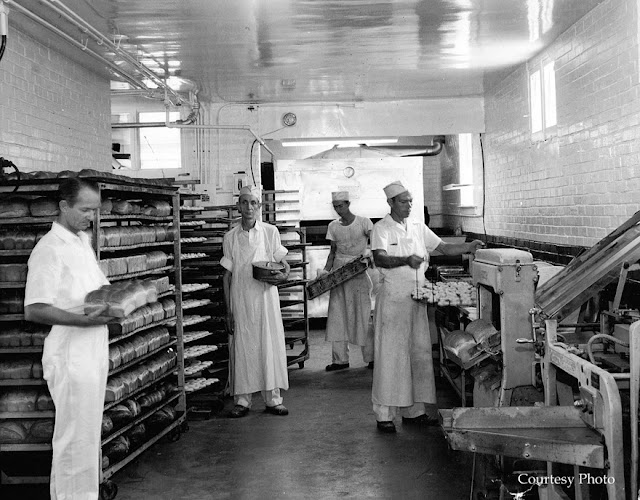 Living over the bakery had to be so convenient for the Bays.  They had two children- Johnny and Sharon.  Below is Sharon with her daddy and other bakers: 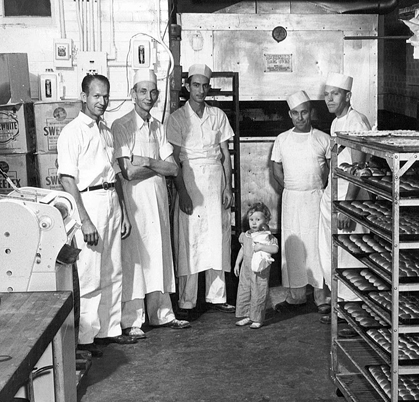 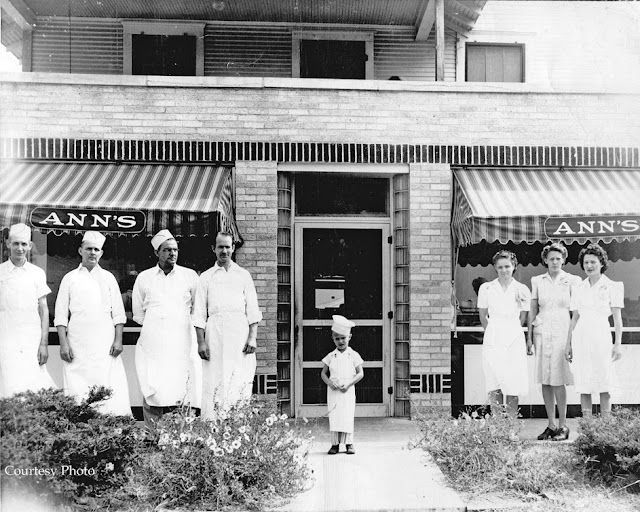 This was around Easter, sometime in the 1950's. 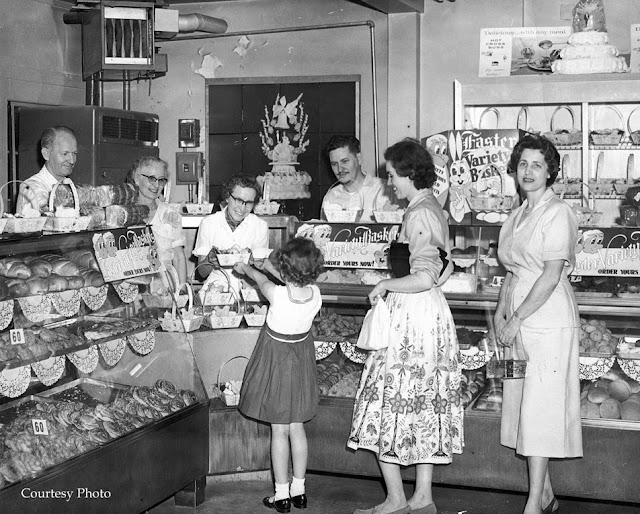 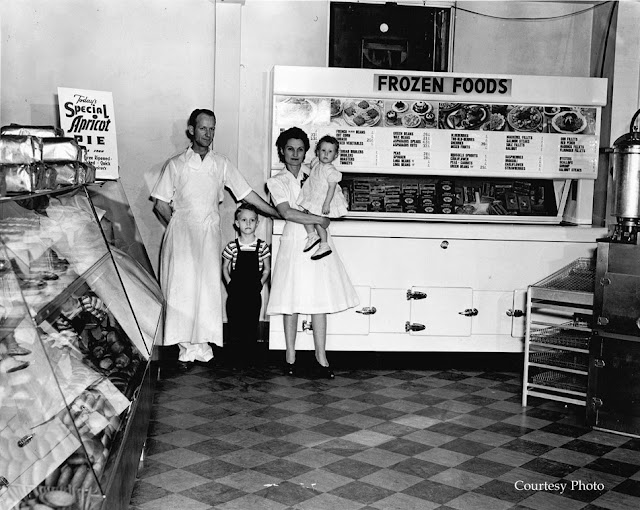 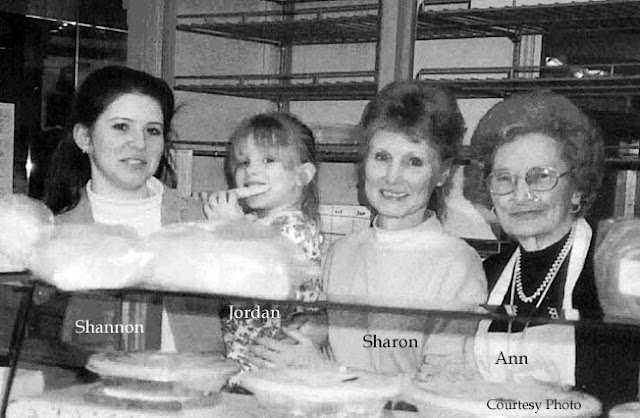 Ray Bay passed away in 1968, leaving Ann and her son Johnny running the bakery for the next 25 years.  When Johnny passed away in 1993, Sharon and her husband continued running it and helping Ann, who worked well into her early 90's.  Sadly, she passed away in 2006 at the age of 100.
And now, Sharon's daughter Shannon is the third generation keeping this wonderful bakery and tradition going. Blogger Tasha Ball (Tasha Does Tulsa) recently had Ann's make one of those vintage Barbie cake/dresses for her birthday and blogs about it here.  From looking at the photos offered on Ann's website, it looks like they can make anything, any idea thrown at them - and make it look great.  I'm sure though, that wedding cakes are their forte- and theirs are beautiful works of art.

Great photos! And how did I not know you worked in a bakery?

i got my wedding cake at anns in sept 1962-- it arrived on a cracked mirror lol but they quickly replaced the base, cake was wonderful sharon

I went to school with John Bay and during weekends and summers when he worked in the evenings for his Dad, we would meet him at the back door and he would load us up with fresh baked breads and doughnuts. What a treat!!

My mother went "back to work" in the 80s when I was old enough get myself to school. She decorated cakes for Ann's. They let her take home day old pastries and cookies and I ate them for breakfast for years. I have never gotten over my sweet tooth.

I used to walk with my Dad from Harvard & Easton (where we lived) down Harvard & across the street to Ann's to get their Chocolate Eclairs! I ate those for years & years & ALWAYS bought them there. Ann's Bakery was a Tulsa tradition!! :-)

My grandmother lived right across the street at corner of Admiral and Harvard. I grew up in that house (1947-1953) until our family moved to Texas in 1953. I remember the wonderful smell of bread baking that came wafting down the street! My childhood home was torn down when they put the freeway in, but I love that Ann's Bakery is still there! So glad to have found your website! Thank you. Janie Ridley Bice