Sometimes when researching a particular subject, a completely different story emerges. Such is the case with what began as the George Mowbray blog entries.  As I peeled away the layers of our local Methodist church history, I became acquainted with the different churches that sprang from the Little White Church that began near what we know today as Cameron and Main Street. 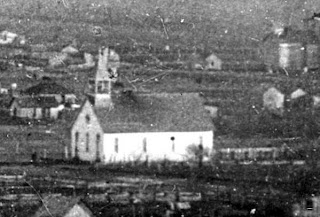 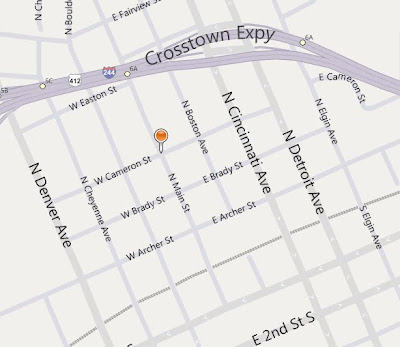 When the congregation outgrew that little church, the members voted to move south and build a brick church on 5th and Boulder in 1905.  However not all of the congregation wanted to move south, and those who did not decided  to build another church just a city block north, near Main and Easton.  This church was named the Tigert-Memorial Methodist Church and opened it's doors in 1906. 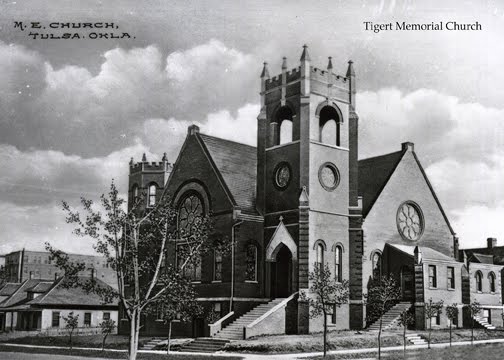 I have not found out what exactly happened within the Tigert Church but it appears that, over time, they ran into financial difficulty and eventually they joined with (or became?) the Centenary Methodist Church.  The church's website states that "The congregation dates from 1906 when it began as the Tigert Memorial Methodist Church".  The Centenary United Methodist Church, located at 631 N Denver, was built in 1920. 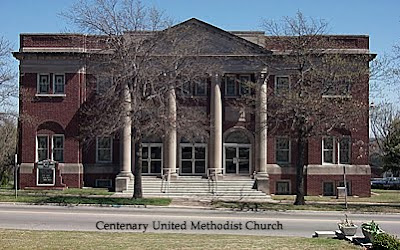 As I continued my research on these churches I discovered an odd connection to, of all things- the KKK.  In Danney Goble's book

he recounts the growth of the Klan in Tulsa after the riot, and how Beno Hall came about.

In January of 1922, less than a year after the riot, 1,500 Tulsan's formed the city's first "Klavern" (the basic local unit of the Klans expanding empire) and incorporated it under the name Tulsa Benevolent Association. Under this name, they paid $60,000 for the vacant Tigert-Memorial Church and property. The church was razed and a new, $200,000, 3-story stucco structure was built that they called Beno Hall.  It was the largest assembly hall in the state at that time, seating close to 3,000 and towering close  to Greenwood, who did not mistake the name's double meaning: that there "Be No" blacks, Catholics, Jews or foreigners welcomed there.
I can find no photo's of this building nor do I know when it was torn down.  Very little information exists about it, although I am not yet through digging.


UPDATE:  Thanks to blog reader Lazzaro, a photo of Beno Hall has been found.  It was in a section of the Tulsa Reparation's Report. 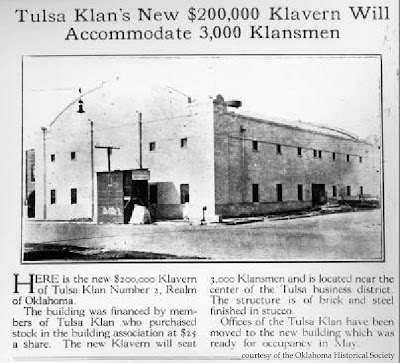 
If you have any other information you would care to share about Tigert Church or Beno Hall, please leave a comment or email me at tulsahistory@aol.com

Very interesting. You are peeling back a corner on a part of Tulsa's history that has conveniently been "forgotten".

Wow, I have never heard of Beno Hall.

I would like to say I'm surprised but unfortunately not. It is very interesting though.

Saw it in 1981 - it was being used to warehouse pecans - - I was sent there to pick up a truck load.
Interesting.

Tulsa Gal, do you know the name of the church that moved south to 5th and Boulder when the little white church split?

The First Methodist Church was located at 5th and South Boulder for 13 years. After outgrowing that building, a new one was built at 11th and Boulder in 1928 where it stands today.

this is also directly across the street from the Brady mansion...
Jessica

Cain's is not at the same location as Beno Hall was.

Hi. I have a post card of this church. It is so beautiful. Do you know anything about Grace ME church at 3rd and Trenton?. It was built in 1915 with brick. Permastone placed in 1953. In 1926, Breathern of Christ took over and transferred the contents of cornerstone.