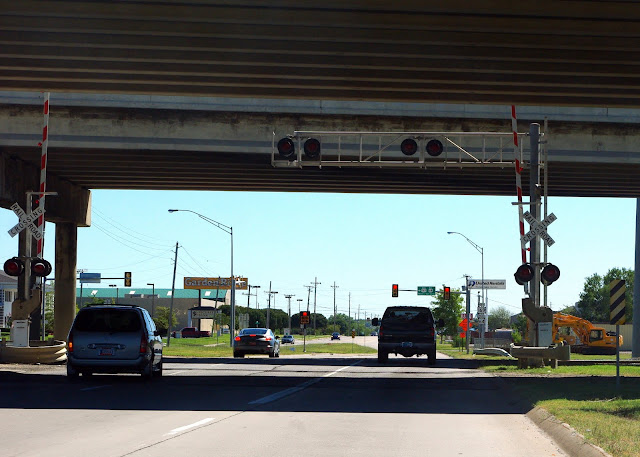 I am one of the many who seem to time it perfectly to be detained at the railroad crossing under 169 on 51st.  I have sat there anxiously waiting for a glimpse of the red caboose (i.e. The End of the train) and zoom on my way to wherever it is I'm headed. 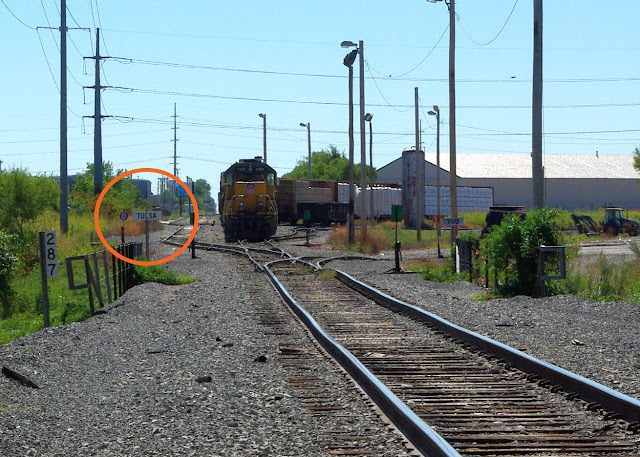 ...to where there once was a little community there known as Welcome.  The name was changed in 1906 to Alsuma, I.T. after John Alsuma, a merchant (although other sources site the name was taken from 3 girls' names- Alice, Susan and Mabel). Then, in 1926, it was changed again to Trovillion (or Troxillion) by the railroad company.  According to some past residents, the sign kept getting torn down until the railroad put the Alsuma sign back up.
Near the southeast corner  of 51st and Mingo - behind the convenience store a ways- there was a large, stocked catfish pond that I can remember being there back in the late 60's and early 70's, owned by a Mr. Goodwin.  Across the street, on the northeast corner was a greenhouse and garden store.  Here is the intersection at 51st & Memorial back in the early 1960's showing a billboard ad for the greenhouse a mile east: 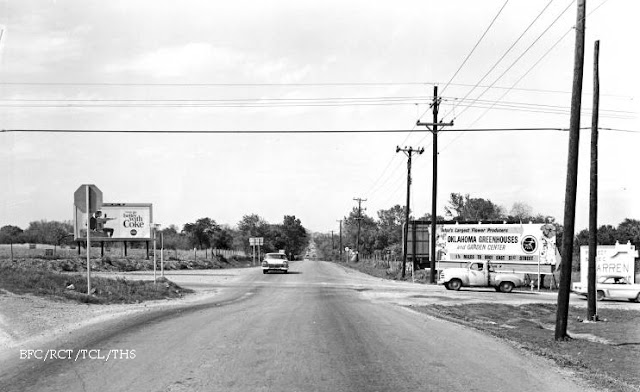 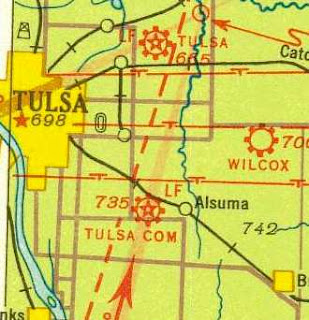 This map shows the proximity to the Memorial Park Cemetery where Alsuma was located: 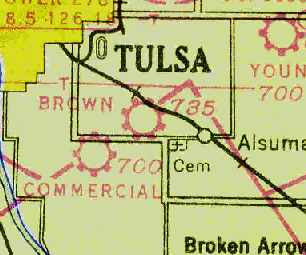 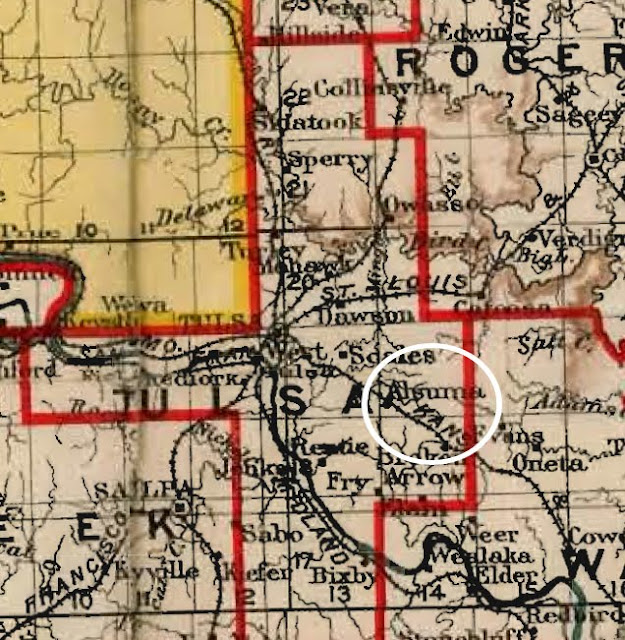 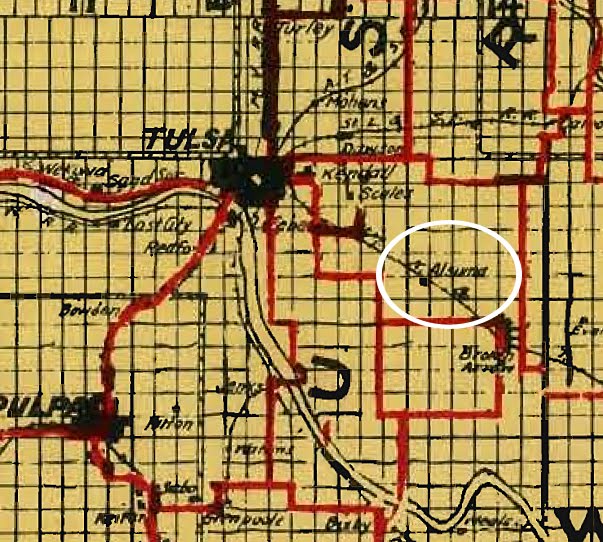 The community was a mixture of both black and white citizens and there were 2 schools, one of them Union and the other Alsuma Separate School.  This picture was taken after the children had received smallpox vaccinations. 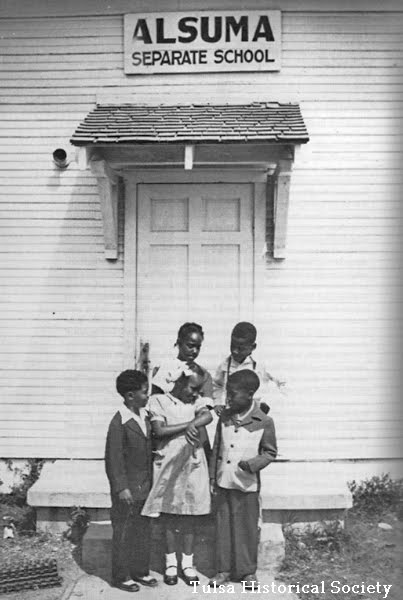 Union School was located south from the town and was formed in 1919 when Alsuma, Mayo, Boles and McCollough were consolidated.  Beryl Ford identifies this photo (below) as being that of the Union school board and teachers.  No date is given but the sign over the door looks like it says 1912. 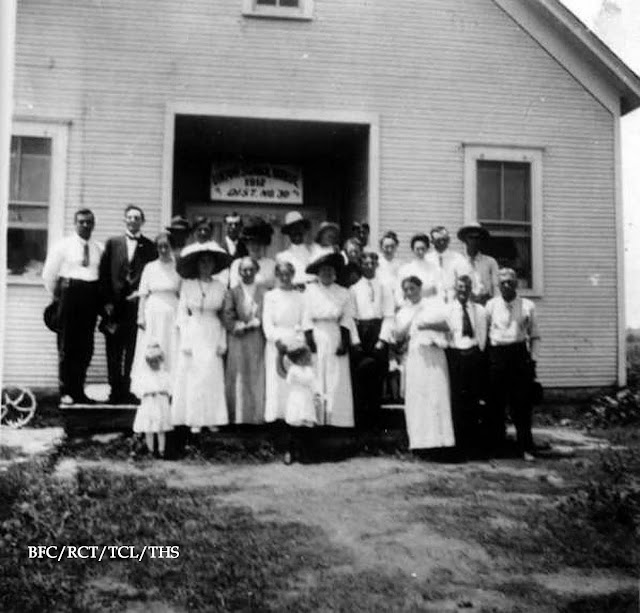 This photo is identified as the Union School in 1924; note the Model T buses in the background: 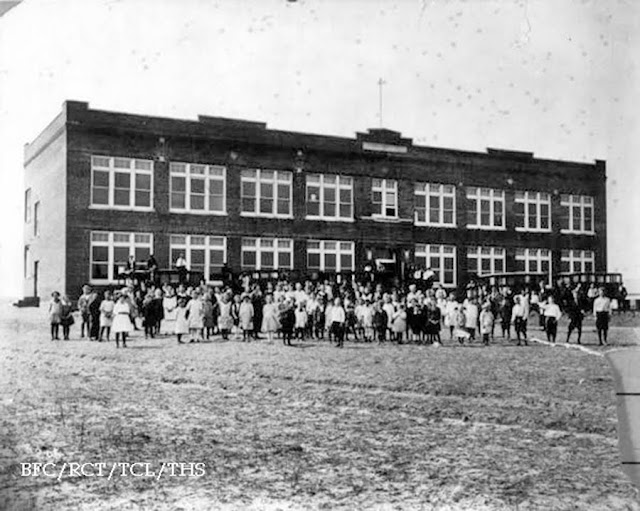 I also have an interest in Alsuma, since I grew up so close to it; due West by half a mile. The reference to a John Alsuma was made on a ghosttowns.com website by someone named Doug Greene. I'm assuming this where you took your info. There's another web page, however, posted by the Greater Tulsa Reporter newspaper which has a different origination of the name.
"According to long-time Alsuma resident DeEtta Perryman Gray, the town was taken from the first two words of three names: Alice, Susan and Mable. Grey did not know who the girls were or why the names were used together."

Read this page about Alsuma

I wish there were more first-hand accounts out there. I've enjoyed your post. Thanks. PS I remember the greenhouse well.

Hi Andrea,
I did read that page as well as many others. I did mean to mention the other name origin possibility- thanks for the reminder!

I was raised in alsuma in the 80's I know not so long ago. The little white house I grew up in is still standing today. I believe it right across the street from D&L auto. The little store down the street where my grandma would take me to get a candy bar its still there. Days were different growing up there it was as if time stood still. I loved it there.
Kari Bell

A very interesting story. I remember the catfish farm and 2 lane roads as late as 1980 or '81. Does anyone know where the train stations were at? It would be interesting to explore the old sites if possible. Thanks for the great history lesson!
Kevin

I spent a lot of my childhood in Alsuma. My Aunt and Uncle lived on 48th Street. I remember walking every where in Alsuma. We attended the Alsuma Penticostal church. I spent every summer and almost every weekend in Alsuma. We went crawdad hunting in the little creek. My Aunt and Uncle are both deceased now but I remember Alsuma and the great times I had there. I believe that at one time they actually owned a restaurant there in Alsuma that burned. Their names were Cecil and Minnie Bryant. I hope that Alsuma is not forgotten.
Janelle Hill

The "Mr. Goodwin" you mention as having the catfish pond (behind the big house on the SE corner of 51st & Mingo) was E.L. Goodwin the owner/publisher of the Oklahoma Eagle newspaper. One or two of his sons are still associated with that newspaper. Mr. Goodwin was a survivor of the 1921 Tulsa riot. His B.T. Washington graduation prom was scheduled to be on the very evening of the beginning of the riot. His wife, Jeanne was my 6th grade homeroom teacher at Robert Fulton Elementary in 1966-67. She lived to be 103 years old and passed in 2006.
Phil Wenneker

Doug
I lived in Alsuma from 1960 to 1998 my dad was lived there as a boy with his mom and dad the Bells. The house in your first picture with the green boards on it, was a store and also a beauty salon. the back part of it was lived in by the Hulls who ran the store. there was gas pumps in the front part. it closed down in 1967 or 68 and Mr Hull sold the land to my Dad and Grandpa. my Grandparents lived across the street till 1979. years before I was born they had a Cafe in the front part of there house. for years the had a sign on the street side of there house that said Bell's Cafe on it. i knew the Bryant's and many others like the Christmas's and the Reeves and my others.

Marvin. I also. Grew up in alsuma many year . My last name was Hays then. Because my grandparents raised. Me we lived right across the across. The. Street. In. Front of the. Train station. Right up the street from the store an . The. Hardcastle . And hicks. My. Grandmother. And. Grandfather. Own. The. Land were. The. Cement plant once was in fact. Mrs. Goodwin was my teacher before. I went to Union school. With hardcastles and hick
Salisbury. Colbert. Johnson. .who. Remember Charles. Piggies. Johnson? Yeah. Alsuma. What. Days it being. Back.

I found the blog interesting; however, there seems to be omissions too. One thing which got my attention was the location of Memorial Park. While the map you showed does indeed show Memorial Park to be just inside the borders of Alsuma. Memorial Park has NEVER been on the north of E 51st, it's south of 51st. (Unless it had been moved and I know of no mention of it ever being moved since it was established about that time.) The map itself is in error. But, it was a guess - I guess. This however puts it into the "Legendary Union Area", something that is Omitted too. and Omitted from the blog altogether. The schoolhouse of Union shown was at one block east of 61st and Mingo (which was the main area of the Union Community), Alsuma stopped at 51st like your map shows. At first, I thought the 1916 map put the bed that "legendary Union Area" had ever existed, until I looked closer at the map. The map has no strong references unless you look at the borders. We know, Broken Arrow east border (as seen from Tulsa) is Garnett;and, we know Alsuma was 51st, so the area north-west of that corner should be the Union Area. I didn't actually see the name Union, but the whole "area" is Marked with a U. I first thought it was a C until I looked at the other areas on the map and Areas were marked with letters with tops facing left. Could this mean "The Union Area?" What else could be "U" for the area? More research will be needed to confirm it, but I doubt U stands for Ukraine.

My grandmother owned & lived in the Wilson''s Grocery Store in the late 50's & early 60's.

My great-grandfather, Henry Seymour Cupps, owned a grocery / general store in Alsuma in the early 1900's. The Post Office was also in the store.

I grew up there, my family was the Kelly's. We lived next to Frankie Shook.

For those that still have remembrances of Alsuma, there is being planned an Alsuma Community Family Reunion in Tulsa during this year's Thanksgiving Weekend. Over 400 hotel rooms have been booked for the 4 day event. The purpose is to gather information about Alsuma that will be used to produce a movie and several publications. For more information email info@conceptsws.com or Rcolbert@conceptsws.com. Any information and/or life experiences are appreciated.

This post is for anyone having information or knowledge of the town of Alsuma. There is in planning an Alsuma Community Family Reunion set for November27-December 3, 2019 to be held in Tulsa, OK. 400 hotel rooms have been booked for the 4-7 day event. The purpose is to gather information about the town in order to gather data to be used in the making of a movie about the Town. For more information, please email info@conceptsws.com or Rcolbert@conceptsws.com for a Survey/Questionnaire. Please do share any information you may have about the town and plan your November vacation in Tulsa with this important venture. If you are related in any way to the Muscogee Creek Native Tribe, we need your input to ensure equal representation in the movie dialogue and script writing.

It was the biggest town East of Tulsa.

I lived in Alsuma between 1957 and 1964 when I got married and moved away. Have fond memories of Alsuma . Also went to Union High School on 61st

My mom was pat hardcastle.

I recall visiting Alsuma sometime in the 50's with my family. MY father, Oliver Davis took us there to visit Grandma Bell, his grandmother...not sure on which side...that part of family is Creek/ Cherokee...I am aware they had mixed with their slaves during Trail of Tears...so they were African American as well...I recall Grandma Bell who was aged was living in an area with shacks...very poor....she was bathing someone e outside in a tub...my mother was afraid we children would 'catch' something so we were not allowed out of the car...I so regret not having been allowed to spend time with my great Grandma and gain so.e understanding of their life and consequently my life....so there were Indians in Alsuma!

Does anyone know exactly where the FTD greenhouse was on 51st in Alsuma? I show it to be just along the east of the creek and across from the catfish pond.

I grew up near Alsuma on Mingo Road, went Union School, as did my dad,in that building shown in one of the photos...when I went Union,that building was the junior high. Very small school, class C in sports. Berryhill was our biggest opponent! By the time I graduated Union school was just starting to expand.

would anybody like to meet and walk this area of town ?