One year after arriving in Tulsey, Annie Mowbray married merchant T.J. Archer.  His untimely death occurred in 1895 and her father, George, retired from the ministry and returned with Hannah to Tulsey as a businessman and to help manage the Archer store. 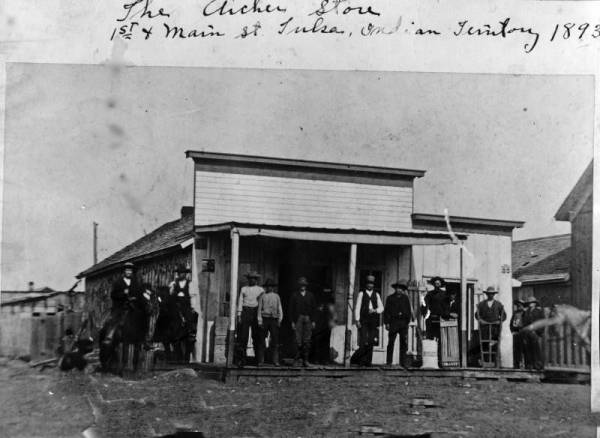 Along with selling a full line of furniture, hardware and implements Mowbray went to school to learn the skills required to organize an undertaking business. 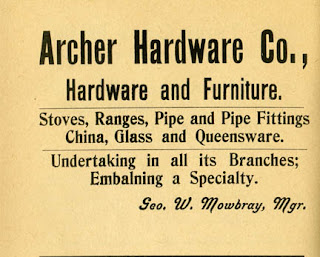 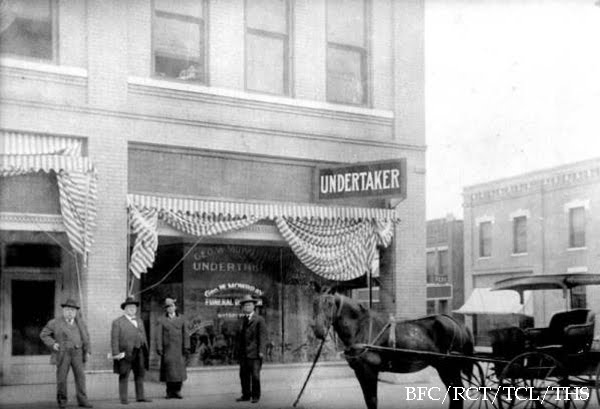 Mowbray became active in all civic aspects of Tulsa as well as serving as the Methodist Episcopal Church for 11 years, helping it grow.  In 1903 it was clear that a larger church was needed but not everyone agreed on where to move.  Some wanted it to be built on the same site as the Little White Church, but others wanted to move south, the direction the town seemed to be moving.  So, those who preferred to move north left the First Methodist Church to establish the Tigert Memorial Church, later renamed the Centenary Methodist Church.

The new church was built on the northeast corner of Fifth and Boulder.  Tulsa's first school was built next door to the Methodist Church and George was the first president of Tulsa's Public School Board.
He was one of the founding members of the Tulsa Commercial Club, now known as the Tulsa Metro Chamber of Commerce, traveling many miles with others to help promote Tulsa. 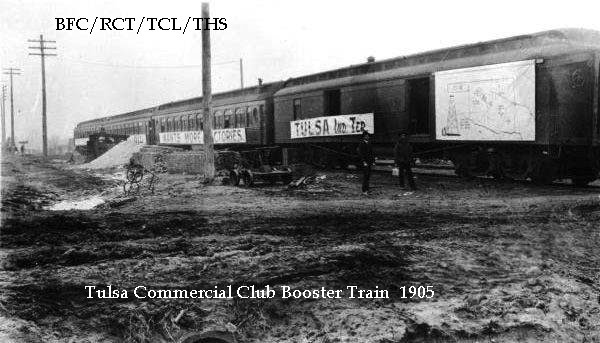 And was instrumental in influencing the Santa Fe Railroad to extend its line to Tulsa.  George Mowbray also served as Tulsa's 5th mayor in 1903-4. 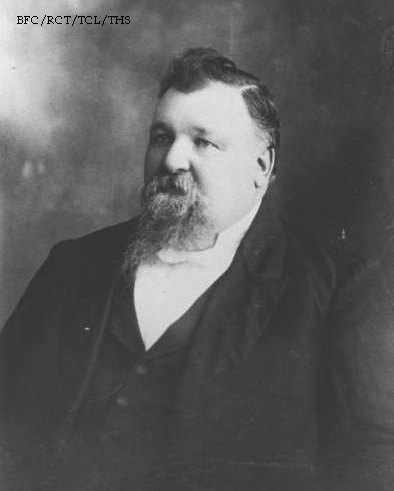 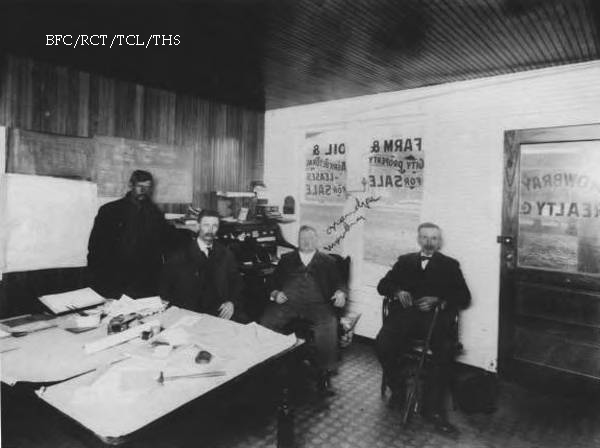 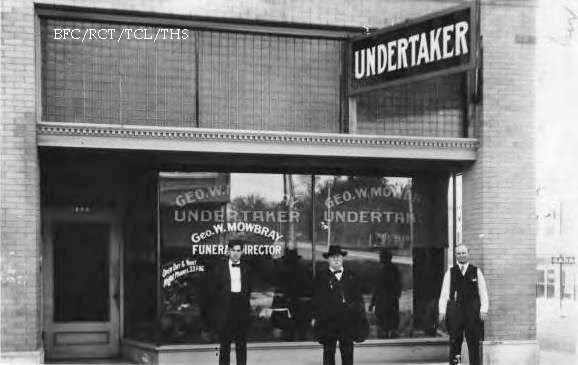 Mowbray eventually disposed of the mercantile interests and focused on the undertaking business until his death, of natural causes, January 12, 1910.  He is burred at Oaklawn Cemetery. 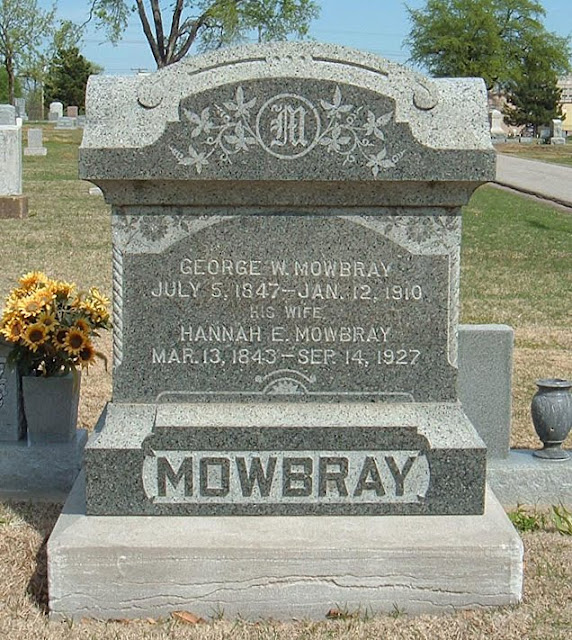 Southwest Tulsa Historical Society President Roy Heim has done some sleuthing for us regarding the WWII monument mystery.  What he has uncovered so far is this photo, which is very cool- shows the neighborhood surrounding (then) Boulder Park: 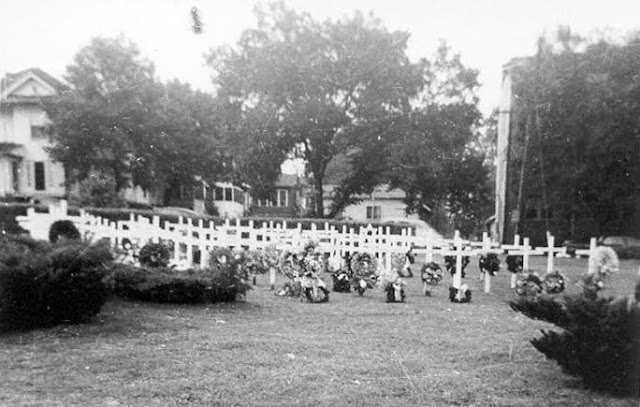 And this article in the newspaper, from which we learn that those etched panels were glass and some had already cracked before the official Memorial Day tribute.  (click on photo to enlarge) 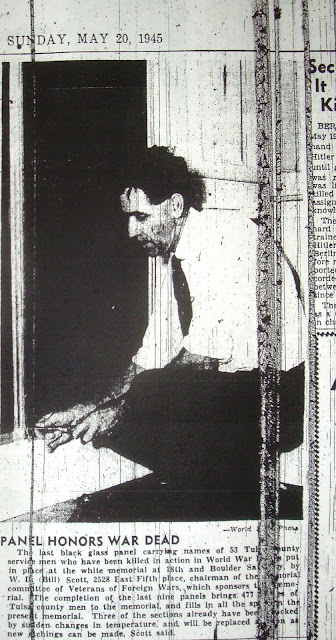 If only family or friends of the Bill Scott family were around- perhaps they might know what ultimately happened to this monument.
Thanks to Roy, who is still investigating this.
Posted by Nancy at 9:08 AM No comments:

Last October I blogged about the old radio station KOME and my dad who worked there for awhile in the late 1940's (that's my dad, Larry Robertson, pretending to be on the phone): 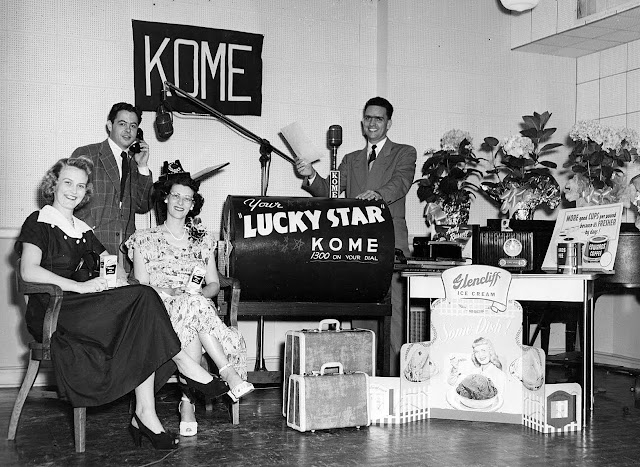 Fellow blogger Michael Bates recently came across- as he puts it- a 'treasure trove of radio history' - that being Radio's Online History Resource- and posted links to it here on his webpage Batesline.
What a treasure indeed. He has linked up interesting pages including a section of the 1949 Radio Annual with Oklahoma's listings.  And lo, what did I find but this: 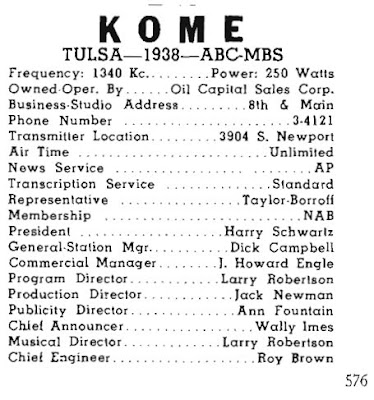 Just tickled me no end to find this.  Thanks for sharing this fascinating website Michael!
Posted by Nancy at 11:00 PM 1 comment: 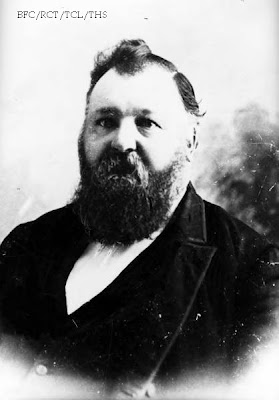 It's rather hard to believe that a proper Englishman, born in Melton, Leicestershire in 1847 would end up in the wild and wooly Tulsey Town in 1888.  An Englishman who was married to a "blue blood" also from England, who gave his first sermon at age 16, and was named George Mowbray.  He came to Tulsey as the new preacher for the Methodist Church but he achieved so much more.
Many local historians are familiar with this photo, taken around 1889, from Standpipe Hill. 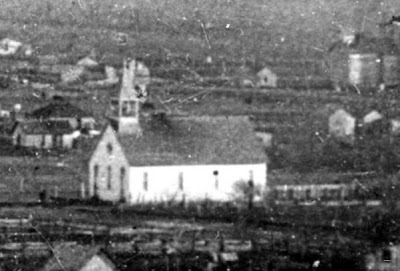 The Little White Church had been built by the Methodist congregation in 1887 and was located near North Main and Cameron.  Sadly, within a few short years it had fallen upon hard times.  The parsonage had been repossessed, so when the Mowbray family (George, wife Hannah and two of their four children Madelaine aka Maitie and Grace) arrived from Kansas on April 18, 1888, they spent their first night sleeping in a windowless 2-room shack that had formerly housed a butcher shop.  After scrubbing down the walls and floor to get rid of the smell, the family tried to sleep only to awaken to bed bugs crawling all over them.  On their second night here, a goat wandered into the shack scaring all of them until they lit a lantern to see who their visitor was.
There was no water on the premises so it had to be carried from a well that was 2 blocks away.  The children all came down with typhoid at one time or another.  George and Hannah often suffered from malaria.  Since Dr. Booker was the only doctor at the time, it was pretty much up to Hannah to nurse the family back to health in that windowless room. 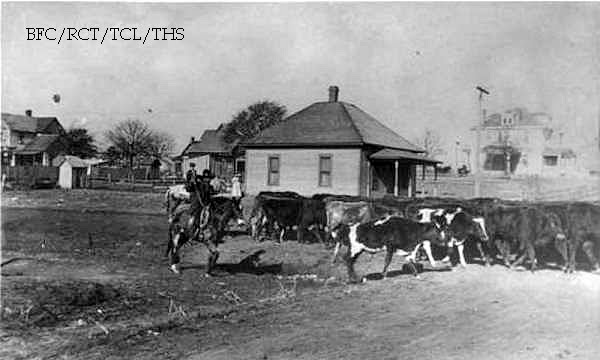 Life was quite different here than in Garth, England where Hannah had come from. Here, hogs ran wild and loose in the dusty streets, cattle were driven past their front door on their way to the train and drunken cowboys went wild on payday, riding into the town, yelling at the top of their lungs and shooting out every lighted window they saw.  But the Mowbray's persevered. 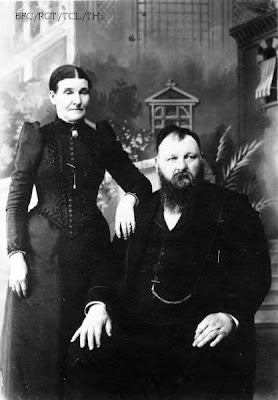 One story that has been told often is about the Christmas of 1889.  Rev. Mowbray had been warned by a cowboy that if he continued to preach against the evils of their life he would be sorry.  That Christmas Eve the church was packed and the program underway when a crowd of drunken men, both white and Indian, managed to get into the balcony and began throwing empty whiskey bottles at the tree, then they began firing their pistols into the air, trying their best to terrorize the little congregation.  As the men in the congregation tried to calm everyone, they all noticed Hannah Mowbray- deliberately and with great command- going from man to man demanding they deposit their guns into her outstretched apron.  She then marched down to the front of the church and deposited 12 guns in front of the altar.  From then on, Hannah would greet members at the door before services with her apron extended for guns to be deposited into. 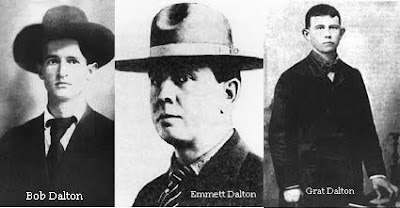 Outlaws such as the Dalton Boys- Grat, Bob and Emmett- particularly liked the Methodist Church.  There was an agreement between them and the law that, while in the city limits and especially when worshiping together in church, that they did not bother each other.  Many years later, Hannah was quoted as saying (about the Daltons): "They all had wonderful voices.  They sang in my husband's church on Sundays and ravaged the country during the week." 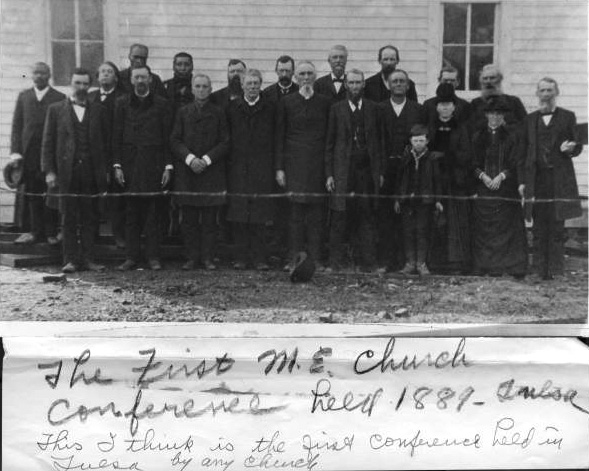 The Mowbray's also had a passion and interest in Tulsan's getting an education.  The Presbyterian mission school was overcrowded and there was a need for another school for both the white and Indian children of the church.  When he needed a teacher, the Reverend looked to his oldest daughter Annie who was still living in Kansas working as a seamstress.  He wrote to her and asked her to come to Tulsey to serve as organist in the Methodist day school (which was opened in the fall of 1888) and to assister her sister Maitie in teaching.  Although only 15 yrs old, Maitie had passed a teacher's exam in Pennsylvania.  The sisters taught until 1899 when Tulsa became incorporated, furnishing public education. 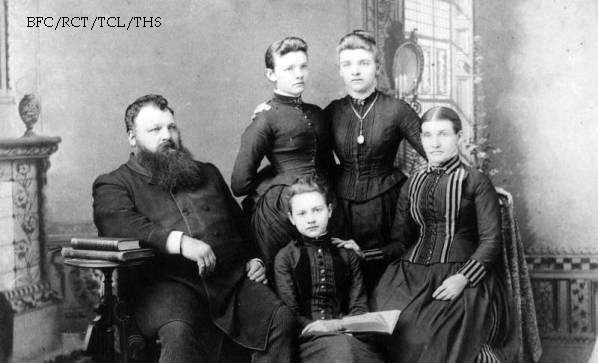 The men of the church constructed simple pine benches.  School supplies were whatever the Mowbray's had been able to collect from interested Tulsan's -which was an assortment of various books.  In the winter, to heat the little room, the sisters had to arrive before daybreak to build a fire in the big coal stove.  When the school opened, with 21 students from ages 6 to 21, many of the Indian students had to have interpreters until they learned the language.
George and Hannah Mowbray were summoned by the bishop to move on to Choctaw City to continue their missionary work.  But a tragedy would bring them back to Tulsa permanently.
Sources:  The First Hundred by Wishard Lemons; Tulsa's Magic Roots by Nina Dunn
Posted by Nancy at 8:16 PM 3 comments: