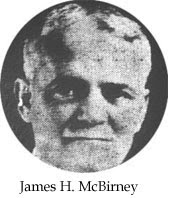 James H. McBirney came to Tulsa from Kansas to work as a bookkeeper for the Tulsa Banking Company; his brother Sam followed the next year to do the same.
J.H. was soon made assistant cashier and in 1904, when the bank reorganized, became Vice-President.  When the bank changed hands to outside interests, J.H. felt it was time to organize a locally-owned bank.  He and brother Sam formed the Bank of Commerce which later became the National Bank of Commerce in 1911. 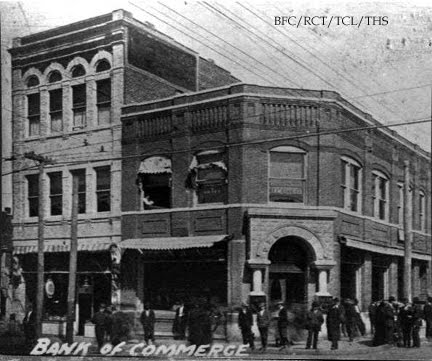 They soon built two of Tulsa's early skyscrapers: the 10-story McBirney office building and the first 8-story home for his bank.  These were located on 3rd and Main. 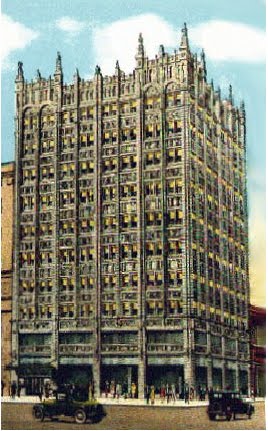 The McBirney Brothers were avid sportsmen.  When he first arrived here, J.H. accepted a position as pitcher for the city's first baseball team and Sam who also played on the team,  went on to coach at the high school and then at the University of Tulsa. 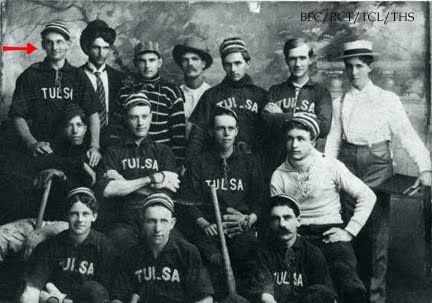 J.H. traveled frequently to Red Fork after arriving here, to court Vera Clinton.  They were married on June 6, 1901 by his father, Reverend Hugh McBirney and by the Reverend C.W. Kerr, Pastor of the Presbyterian Church. 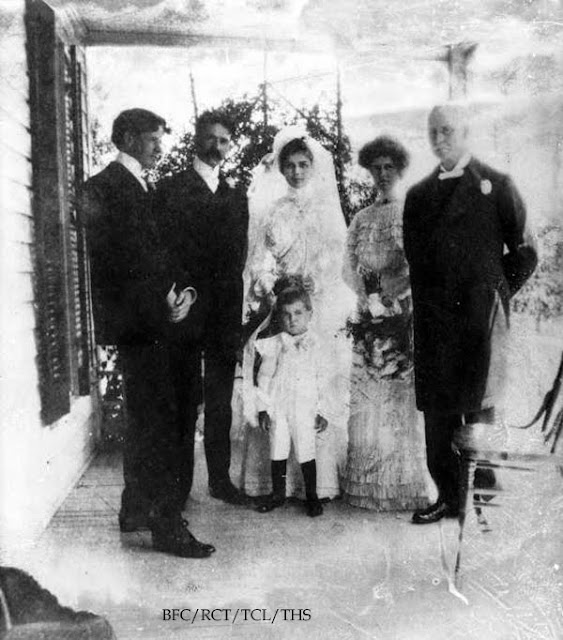 By 1918 J.H. and two associates were developing the *Childers Heights subdivision along the Arkansas River.  For his own home, he chose 3 acres near the river where it is believed that author Washington Irving camped in 1832 while traveling West for his Tour of the Prairies.  There is an underground spring on this land that attracted many travelers back then, wanting to water their horses or cattle before crossing the river.  A ferry replaced the ford serving travelers across the river to Red Fork until the bridges were built.
The photo below of Ora Hall watering her horse was taken at the spring before the McBirney's owned the property: 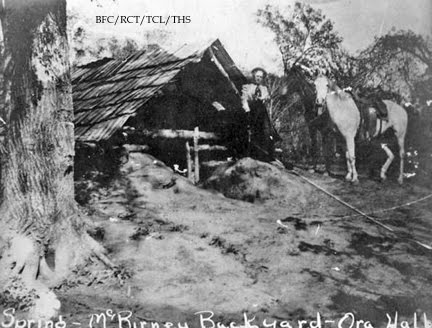 The 12,000 sq ft. home, built by John Long of Kansas City, was completed in 1927-28.  It featured an elevator serving all four floors and incorporated several stained-glass elements in the windows highlighted by an oak and marble fireplace in the large living room.  There was a golf course and the spring-fed grotto was stocked with rainbow trout.  Looking south, southwest toward the refinery, the house is pictured here on the far right: 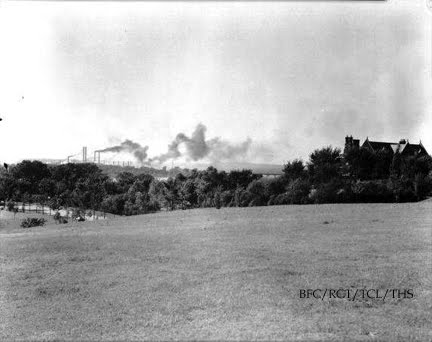 The McBirney's had four children: Dorothy, Martha and J.D.  Another son, Simmons, died at the age of 16.  Among the many notable people who visited the McBirney mansion was Amelia Earhart, friend of Dorothy (pictured below). 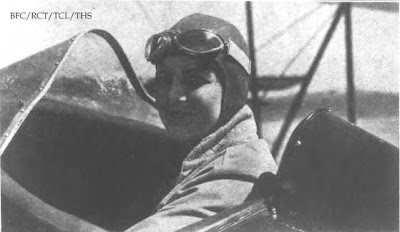 In addition to his many civic and business organizations, J.H. gave many years of personal time and money to help the First Methodist Church grow from the time he came to Tulsa.  He helped oversee the planning and construction of the magnificent gothic structure that stands on Boulder Avenue. 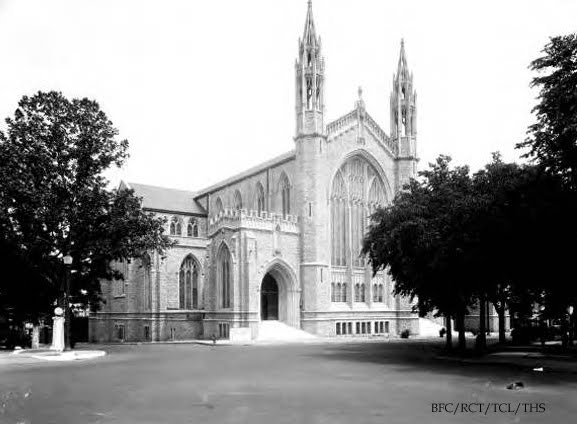 The McBirney Chapel is a small, beautiful auditorium adjoining the opening into the main auditorium and is dedicated to the memory of McBirney family.  He passed away June 8, 1944 at the age of 74. 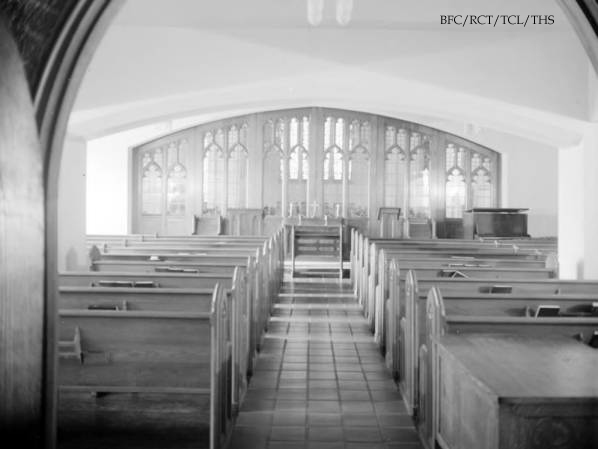 *The Childers Heights subdivision (named after the Childers family who first owned the land allotment) was where many of Tulsa's first mansions were erected by some of Tulsa's first builders and developers.  McBirney's home is one of the last still standing. It was recently purchased by George A. Warde.
These interior photos were taken of the home (a bed and breakfast) a few years ago, showing the striking beauty of the front entrance area and the stained glass in the library: 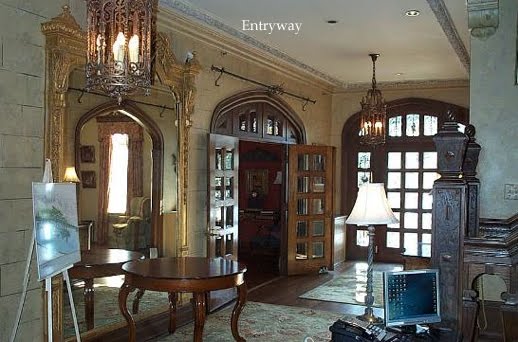 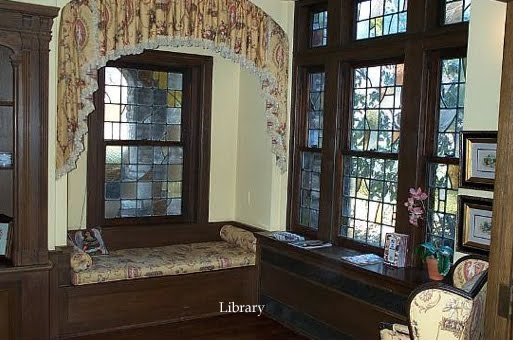 The mansion today, 1414 South Galveston.  I love these old cedar and magnolia trees. 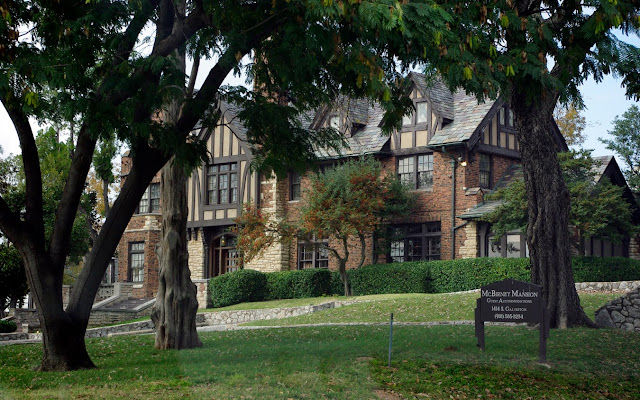 by J.M. Hall; Chronicles of Oklahoma by Fred Clinton
Posted by Nancy at 8:22 AM

Nice history on a lovely old mansion. I have taken pictures and did a post in Historic Tulsa but have never been inside. It looks very elegant.

I have always admired that home. Everything about it is so well executed, including the site selection and landscaping. Thanks for sharing this.
Like Bill, I have never been inside, but would have loved to tour it when it was still a home.

..and to think we got to live in the "servant's quarters" for a while! It was quite interesting while Martha was still seeing to the estate after her mother died. We got to pick up the mail and papers when she would go back to Colorado.

This mansion is very special to me. Vera McBirney was my father's cousin, and as a child in the 1960's we would visit her many Sunday afternoons. Though she was a cousin, I called her "Aunt." I've not been in the house since the late 60's, and the last time I saw Aunt Vera was when she came to our house after my father died in November 1967. I love the "old" pictures of the house. I spent many a Sunday sitting on that window seat in the library. I rode the elevator as many times each visit as I could before one of my parents would make me stop. Aunt Vera didn't mind me roaming the place. I loved the basement and all the things it held, especially the Amerian Indian dress that she had on display down there. And I spent as long as I could in her dining room, looking at her vast collection of salt & pepper shakers. So many memories. I'm sad that the mansion is no longer a "home."

I am happy to see so many people interested in the mansion. My name is Lisa Anne Bradley, I am a Great Grand Child of Vera and JH McBirney. I have great memories of the mansion growing up. I remember Grandma Birney playing cards with my sister and I for hours! She was one in a million. I also remember Grandma Bradley (Martha), Uncle Don and Aunt Dorothy very well. The families were all very close. I spent every Christmas growing up in the mansion. I have lots of wonderful stories to tell. My Mom and Dad's (James David Bradley) house is filled with furniture, pictures and other beautiful things from the mansion to this very day. I have a collection of over 150 salt and pepper shakers from Grandma Birney's beautiful collection now! If anyone has questions I would be happy to try and answer as much as I can.
tcc you must mean the house in Evergreen Colorado and Sally Ann I suspect your last name is Bird.

I have learned from this article more information to tell our guests since I have been here(since June 2010). I love the picture of the natural spring from before the house was built. I know exactly what tree it is without making out any of the rocks. Me and my wife Amber and our now 7 month old baby are the InnKeepers there now. I take care of all of the grounds and maintenance unless I just have too much going on which happens periodically. I would love to have a little more info and pictures of the family here on display. When I came here I was told some great history but since then I have noticed it really tells nothing about the family who made this destination what it is today. Me and my wife would love to have more to share with the guests that come in from all over the world to stay in this marvelous home.... Thanks to all!

I grew up less than a block away from the McBirney Mansion from 1948 to 1959 as a child. Whenever it snowed, the McBirneys would open their huge yard to all the neighborhood children to sled down the sloping hill to Riverside Drive. One Christmas, my mother took us to visit Mrs. McBirney. The house was incredible inside. I remember a very tall white Christmas tree (it was real, so must have been covered with artificial snow or flocking of some sort since artificial trees had not been invented then); it was covered with large shiny royal blue balls and stood in front of the beautiful front windows of the house. In an inner wide hallway or maybe a sitting room there were several tables with the massive number of salt and pepper shaker sets that have been alluded to above by her grandchildren. They were the vintage 40's and 50's figural kitchy characters that collectors now find on eBay. As a child, I was quite impressed at the variety and quantity of her collection. She was a lovely and gracious hostess and someone who was beloved by all the neighborhood children of that time.

Thank you everyone for sharing your memories here.

Megan Bryan
Hello Lisa Anne Bradley, I am also a McBirney grandaughter. Would love to talk with you.
megan@meganbryan.com

My name is Scott Holz, and I am with Rose Hill Memorial Park. Would love to visit with you about some plans I have for the cemetery.
scott@rosehilltulsa.com

We just had our property in Red Fork surveyed and on the original Clinton Homesites Addition survey where all the plots were defined it says:

"Know all Men by these Presents: That Jane M. Clinton and Fred S(?) Clinton her husband and Vera McBirney and JH McBirney her husband, Lee Clinton and Sue M Clinton his wife are owners of the South East Quarter of the South East Quarter of Section 22 except that portion lying within the Right of Way of the Oklahoma Union Railway, also the North 190 feet of the North East Quarter of the North East Quarter of Section 27, all in Township 19 North Range 12 Wast in Tulsa County Oklahoma containing forty five and seven tenths acres more or less according to the Government Survey thereof as shown on the annexed plant, have caused the same to be Surveyed, Steked and Platted into Lots, Blocks, Streets and Alleys and called "CLINTON HOMESITES" Addition to Red Fork and that all of the street and alleys of the same are hereby dedicated to the public for public use forever.
In witness whereof we have hereunto set our hands and seals this _____ day of February 1927. "