I was recently contacted by a nice man who had once played the Orpheum organ and was very touched by the photo I have of it posted here.  His name is Dennis Scott and here is his story:

I worked at the Orpheum as an usher/assistant manager from 1965 until early 1970, just before the theatre was torn down.  The Wurlitzer was the first theatre organ I ever played. Phil Judkins, Dorothy Smith and Bill Roberts let me play it in 1962, just before they dismantled it for rebuilding.

The Wurlitzer was sold in 1969 by the Orpheum Building's owner to a business associate in Texas, without telling anyone involved with the organ's upkeep.

We were all stunned. I had just finished lunch one day at the Orpheum Char-Bar and was headed through the alley to my other job as a copywriter at Vandevers.  As I passed the stage door, it swung open and I could see the console being wheeled into the alley.  I had played the organ only a couple of days before and I was in shock. It was like watching a friend dying.

The story has a happy ending however.

I'm president of the Chicagoland Theatre Organ Society and in 2003 I got an email sent to organ club presidents all over the country.

A fellow named Chuck Wright in Texas wanted to find a new home for his little two manual theatre organ console because he was planning on adding more pipes and a larger console to his home pipe organ.

To make a long story short, it now sits in my basement "speakeasy" in Chicago and will soon be playing, using digital sampling.

That way, I can rehearse my silent film accompaniments at home on a "real" theatre organ. 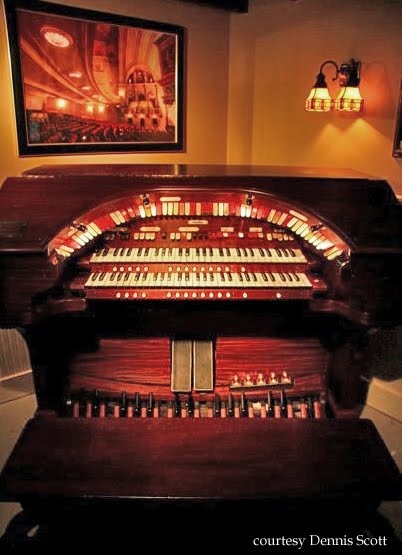 Behind that console is a photo of the Orpheum, taken the day before it was torn down.  The original photo was in black and white; Dennis colorized it beautifully and enlarged it: 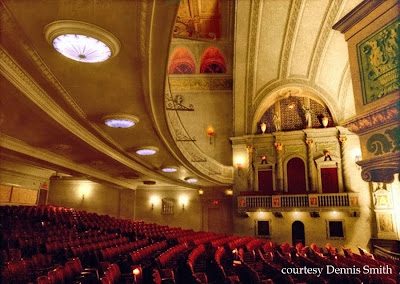 And this is Mr. Scott himself behind the Barton console in the Rialto Square Theatre, Joliet, IL: 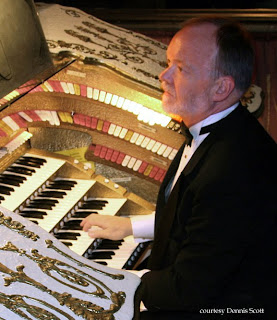 Thank you Dennis.
Posted by Nancy at 1:35 PM

The person who had that beautiful place torn down should be publicly stoned to death.

I saw "The Great Escape" there in 1962. As young as I was, I could tell that the theater had been used for more elaborate purposes than just showing movies in its earlier days. It was obvious it was something special.

I have always been amazed at the great works of art in Tulsa that were destroyed during the 1960's and 1970's, sometimes just to create a parking lot. I am glad the destruction finally stopped.MT

What a great story. The Orpheum was truly one of the gems of Tulsa theaters. It was built in a time when going to the theater/movie was a special event and the architecture was a part of the event.

Great picture! I actually have one of the lights that was up by the statues, that was saved from destruction. It is nice to see where it came from! I wish I had seen it before it was destroyed.

Vernon O.Jackson Jr., former President of the Sooner Chapter of the American Theatre Organ Society played the Orpheum organ in its final years when he was a teenager.

Mr. Jackson always said he played for the 'statues', in an otherwise empty 'house'; the patrons had dwindled to the point no one came anymore.