I'm not usually one to copy/paste other writers pieces here, but 3 years ago, during the Oklahoma Centennial celebration, Tulsa World staff writer Gene Curtis covered the Memorial Day history in Tulsa so well, I'll just let him say it again.  I will add some photos along the way………
ONLY IN OKLAHOMA:  MEMORIAL DAY 1945
by Gene Curtis                  May 28, 2007
The fighting in Europe had ended earlier that month but it was still raging in the Pacific when Tulsans paused for a day to remember their war dead in ceremonies similar to those in other cities and towns in Oklahoma and across the nation.
The main ceremony on that Memorial Day of 1945 was at Boulder Park, 18th Street and Boulder Avenue, where 51 white wooden crosses had been erected to represent the 622 Tulsa County soldiers, sailors and Marines who had been killed in action during World War II. That park now is known as Veterans Park. 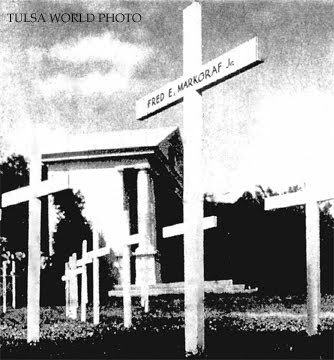 There wasn't enough room to plant a cross for each of the dead, but the names of all 622 were displayed in the flower-covered small white memorial building erected by Post 577 of the Veterans of Foreign Wars, which was in charge of the program. 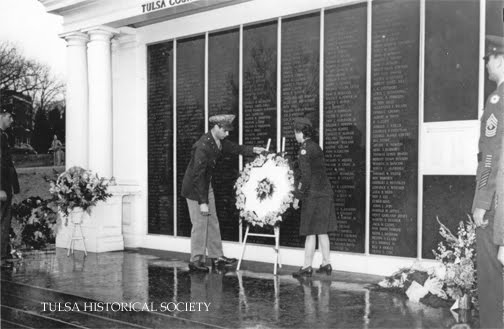 More than 1,200 people filled all the folding chairs that had been set up for the program that featured patriotic music by the American Legion band, the burial ceremony used by the VFW post at the graves of veterans, placing of wreaths and flowers at each cross and speeches by Mayor Olney Flynn and Army Lt. Col. Harry L.S. Halley, a judge who had served in both World War I and World War II. Hundreds more went to the event but left after putting flowers on the crosses. 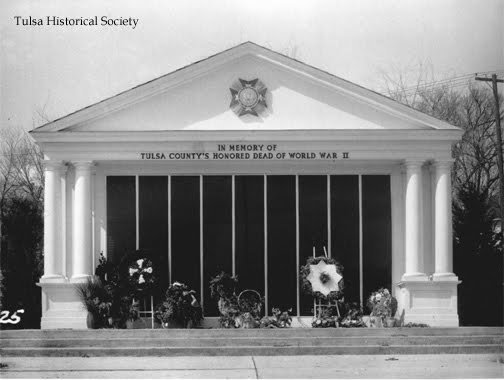 Thousands had visited Oak lawn, the oldest cemetery, Rose Hill and Memorial cemeteries earlier on that May 30 to put flowers on the graves of relatives and friends. A special service was held at the Catholic cemetery. 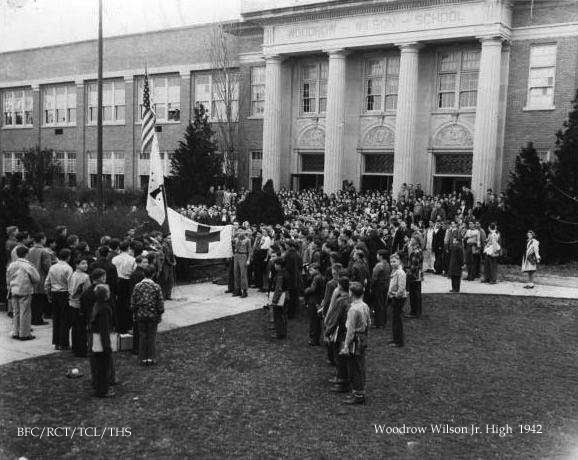 It was a Wednesday, long before Congress changed the holiday to the last Monday of May with the National Holiday Act that took effect in 1971; long before Memorial Day became part of a three-day weekend marking the beginning of summer and a time to go to the lake. The biggest lake of substance was Grand, some 70 miles northeast of Tulsa.
Gasoline was still rationed -- most car owners got three gallons a week -- but many Tulsans used some of their fuel to take advantage of their middle-of-the-week day off to have picnics at Mohawk Park, to take dips in the Newblock Park swimming pool and to walk through the Woodward Park rose gardens that were blanketed in blooms.
Similar ceremonies were held on Memorial Days 1944 and other years before and after that date, but that 1945 ceremony was special because Germany had surrendered on May 7 and Allied forces were gaining the upper hand in the Pacific, where fighting continued until after the U.S. dropped atomic bombs on Japan on Aug. 6 and 9. The Japanese officially surrendered on Sept. 2 although they had announced surrender plans earlier.
Memorial Day of 1919, called Decoration Day here, had a special significance. Units of the 36th Infantry Division made up of Oklahoma and Texas soldiers arrived in New York after service in Europe during World War I. Oklahoma Gov. J.B.A. Robertson and a large group of Tulsans were on hand to greet the returning doughboys.
Many gathered at Fourth and Main streets and took a trolley to Oaklawn cemetery at 11th Street and Peoria Avenue for a ceremony. Another ceremony was held at Owen Park.
Memorial Day ceremonies had been a tradition in Tulsa. In the 1930s they typically began at Memorial Hill, Cincinnati Avenue and Easton Street, where a flagpole had been erected in a park, and moved later to Oaklawn Cemetery. The Memorial Hill ceremonies were handled by the Daughters of the American Revolution and the cemetery rites were handled by the VFW, the American Legion and the United Spanish War Veterans.
Fifteen Civil War veterans attended the 1929 Memorial Day ceremonies but their ranks had thinned to fewer than 10 the next year and to two by 1933. That was the last year they were mentioned in news reports about the events.
Memorial Day was first observed May 30, 1868, after Gen. John Logan, national commander of the Grand Army of the Republic, proclaimed it as a time to honor Union and Confederate soldiers by placing flowers on their graves in Arlington Cemetery. New York recognized the holiday in 1873 and by 1890 all northern states had recognized it.
Southern states honored their war dead on a different date until after World War I, when the event was changed to honor all war dead, not just those who died in the Civil War. Several southern states still honor Confederate dead on a different date.
The holiday was called Decoration Day until about 1882, when Memorial Day was first used but the two names were used interchangeably for many years and the Decoration Day term was favored by many. Memorial Day became the official name by federal law in 1967, although Decoration Day continued in use then and today. In many places in the South, Decoration Day is observed on the Sunday before Memorial Day. It also became common to decorate the graves of all relatives, not just veterans.


Beginning in 1922, veterans' organizations sold paper poppies, symbolizing the flowers that grew in Flanders Field during World War I, for Americans to wear on Memorial Day; the poppies later were made by disabled veterans and worn to commemorate veterans' sacrifice.
For decades, the event almost always included parades and decorating of graves, but most Americans have forgotten the meaning and traditions of Memorial Day -- it's now just a holiday. 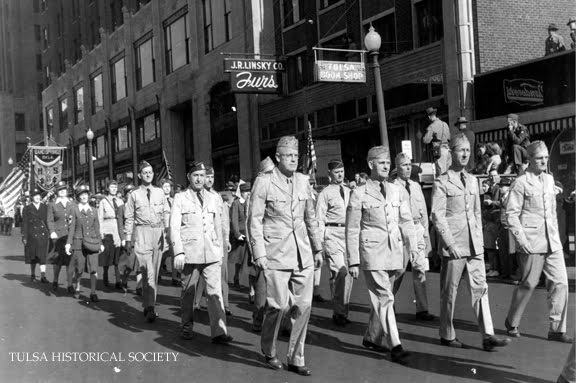 The VFW said in a 2002 Memorial Day message: "Changing the date merely to create three-day weekends has undermined the very meaning of the day. No doubt, this has contributed greatly to the general public's nonchalant observance of Memorial Day."
Posted by Nancy at 11:40 AM

A very interesting post. Lots of research involved and I appreciate it.