Pardon my personal story, but I just came across something and wanted to share (it's Tulsa related).
When I was a kid I had an "incident" where I got hurt and the memory is ingrained forever.  Mostly because of the big deal that was made over the wound, the stitches and the surrounding circumstances.  It's one of those stories that lives on due to it being re-told often.  That and the scar I wore from it.
As I've said before on this blog, during my childhood- almost without fail- we went out to eat every Friday night  (usually, but not always, to the Piccadilly that was downtown).  One Friday in 1962 my dad was flying in from Chicago on a Friday night, so Mom picked up her Dad and we all went to eat at the Bordens over in Sheridan Village.  The plan was to eat then go on to the airport and pick dad up.  Fun Friday night! 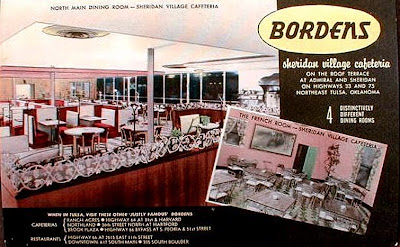 I remember being excited about The Treasure Chest.  It was right there by the door, so you couldn't miss it.  After eating, we got to get 1 toy from it.  My 2 big sisters and I ate fast, needless to say.  We finished way before it was time to head over to get Dad, so we wandered out the front door to hang around and wait for Mom and Grandpa.  I had my Suzy rag doll with me which was almost as big as I was and the focus of our attention was the escalator (one of the first in Tulsa).  What fun!  My sisters walked down the stairs then rode it back up as I watched.  Since I was only 4 years old, I often found that observing was best.  Finally, I ventured down the stairs, which took some time.  As I reached the bottom, one sister yelled that Mom and Grandpa were ready to leave!  I was scared to get on those moving steps for the first time. And it sure was a long way up. I finally did though, clutching my Suzy doll, trying to balance precariously.  When my sister told me to hurry up,  I began trying to step up the escalator stairs.  I accidentally stepped onto the doll, lost my balance and was pitched forward, my head hitting the sharp edge of the step.  I have no doubt I was quite a sight to my Mother as I came up that escalator, bawling and bleeding.
The people at Bordens helped clean me up and, using cloth napkins, put pressure on my cut to stop the bleeding and we rushed to the airport.  I'm told that my dad came walking off the plane, took one look at me and my bloody dress and turned around like he was going to get back on it.  Ha ha.  Funny dad.  We dropped Grandpa and my sisters off at his house then went straight to St. Johns ER where I got stitches (which my oldest sister promptly- and accidentally- knocked out a week later).
I just came across this photo of THE escalator in the Beryl Ford Collection.  And it's every bit as big and scary as I remember. 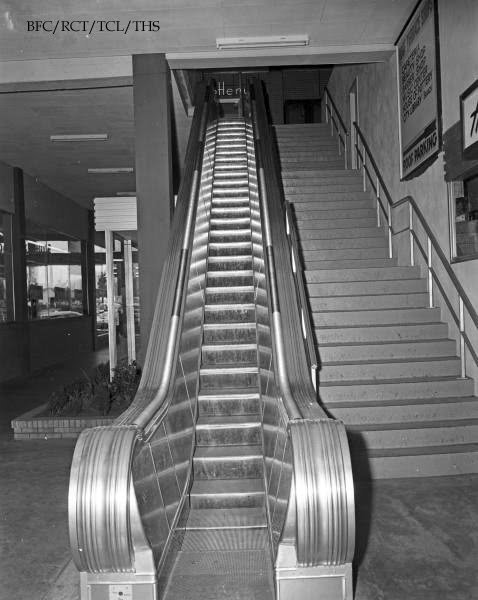 I'd have a complex about escalators if I were you.

The Borden's at Ranch Acres was a regular Sunday dinner place for us.
But I remember going to the one at Sheridan Village a few times. It was a big deal at the time because it was on the "roof"!

Amazingly, I don't have one Yogi!

Driller, people may not recall that there was a ramp in the back of Sheridan Village that took you up to roof-top parking. Too bad they tore that whole center down last year.

We went to mostly cafeterias back then because, as my dad used to say, "They have something for everyone."

I have my own incident with that escalator.

I thought it would be clever to sit on an escalator step and wave at the people further down. It was fun until the escalator nipped my butt at the top! Tore my pants.

Does this photo scare you a little, too? LOL

Yep, I think the whole reason we went to the Sheridan Village was because of that ramp. The whole experience of driving onto the roof of a building and parking there was just about more than most people in Tulsa could imagine in the early 60's. Life was pretty simple, and that is not a bad thing.

I always looked forward to eating at Bordens when I was a kid. The drive up ramp was truly neat. That escalator was something else. For some reason I can remember avoiding it and taking the stairs. My favorite library branch was on the West end of the top deck. MT

Oh my, I would have been terrified of those for the rest of my life!

My mother took us to Borden's all the time! We even had Thanksgiving and Christmas dinners there. I definitely remember riding the escalator - especially when my cousin got her thong (sandal) caught in the teeth at the end! Freaked us out!

Great story, and a great escalator! The TG&Y was next door to that arcade.

I remember the handrails (or whatever they're called on an escalator) were round like a vacuum cleaner hose. But the best part was they were glitter! Like a banana seat!!! Silver and green as I recall.

Rex I had completely forgotten about those rails but now that you mention it..... I do!