Urban Renewal - What We Lost

After World War II ended, the temporary moratorium on domestic housing construction was lifted.  As the soldiers returned home, new housing was in great demand.  The government VA loans helped to increase housing production which led to the growth of suburban areas and the move out of the inner city.  Congress responded with the Housing Act of 1949 which authorized funds to localities to assist in slum clearance and emphasized new construction.
Tulsa was the first large city in Oklahoma to form an urban renewal authority in July, 1959.  After the first Oklahoma project - Seminole Hills - was completed in 1968, Tulsa initiated a downtown urban renewal program, declaring the heart of the city "blighted".  Use of condemnation by eminent domain allowed the city to acquire  9 city blocks and clear dozens of properties to make way for a new office complex anchored by the Williams Center.  In the past the wrecking ball had been fairly selective in which buildings were taken down and why.  Now the city's heart, where it all started,  was reduced to rubble, clearing the way for what was hoped to be a revitalized downtown.
Lost in this was The Grand Opera House, the Lynch building which was Tulsa's oldest standing building and Tulsa's first bank.  The Commercial Building was once a city pride, back in the early oil days, as were the Brady and Tulsa Hotels.  Granted, these buildings were all sagging and weathered.  If they weren't abandoned, they were used as Pawn or Loan shops.  They were eyesores, to be sure.  And at this time, in the late 1960's and early 1970's, what was being done was in the name of Progress.
Here is some of what we lost:
This is the SW corner of 1st and Main 1969.
AAA Trading Post was originally the Lynch Store,
Tulsa's first masonry building.  The building next to it
was where Tulsa's first bank was: 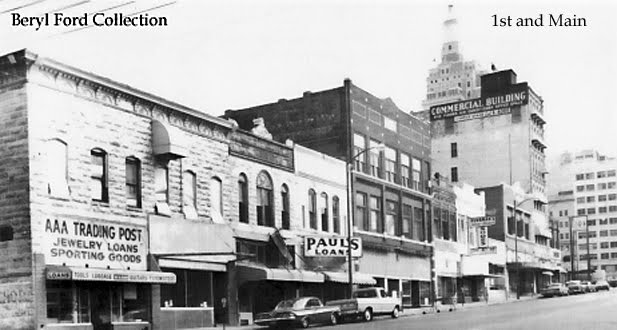 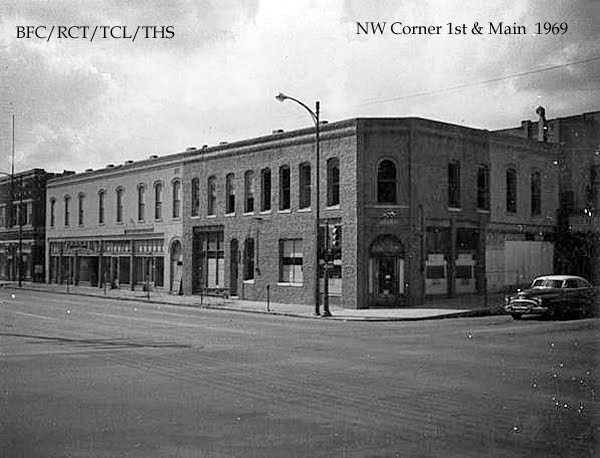 And this was the Archer Building, also on Main. 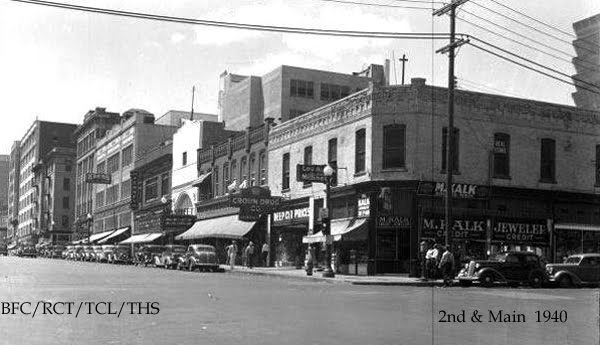 The Grand Opera House opened in 1906 and was where the elite gathered.
In it's last years it was used as an auction house. 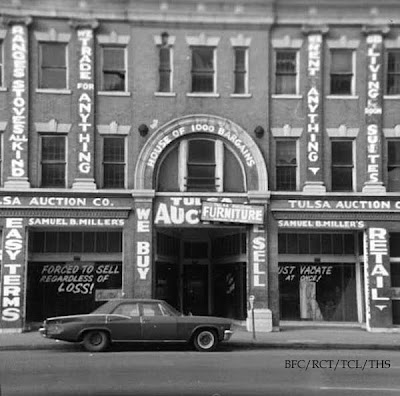 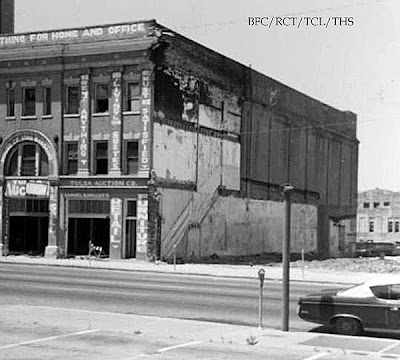 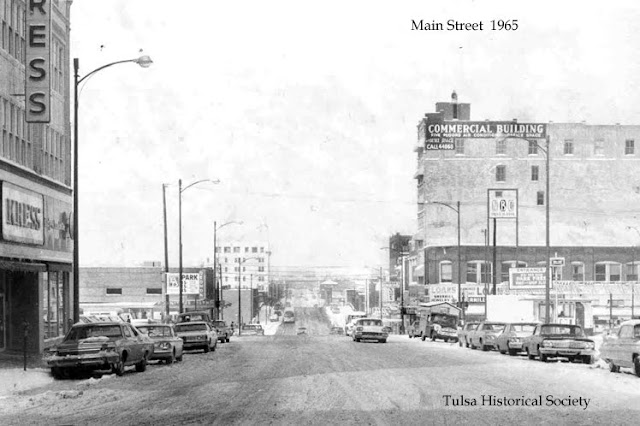 On Boston you can see the Browning Hotel, Uncle Willie's Donuts, Harrington's, Reeder Cafe, and the Bliss Hotel. 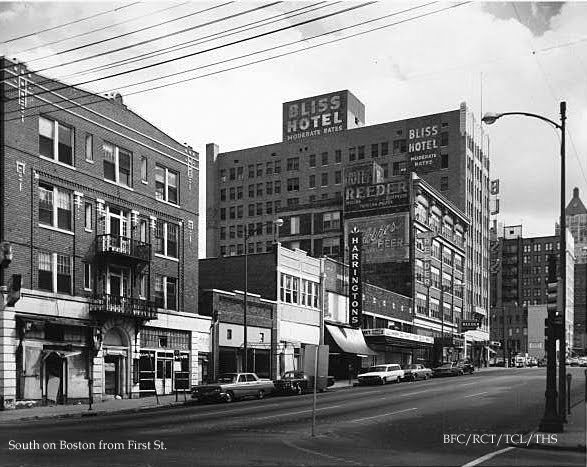 This was the Bliss Hotel under construction in 1929 at 2nd and Boston: 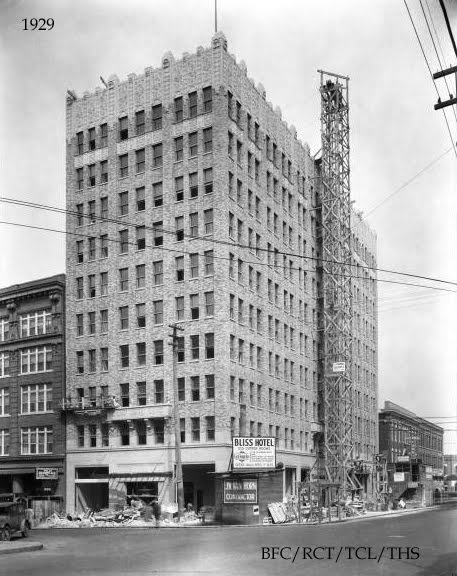 The last years of the Bliss were spent as a home to low-income elderly,
most of whose homes had been bulldozed by urban renewal.
The building came down in Feb 1973: 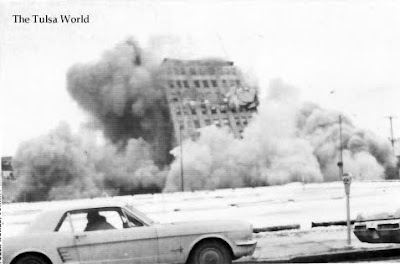 The Hunt Building, home to Brown-Dunkin sat at 4th and Main: 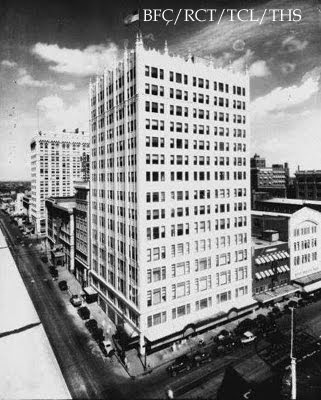 It was torn down in 1970 to make way for
First National Bank's expanding complex: 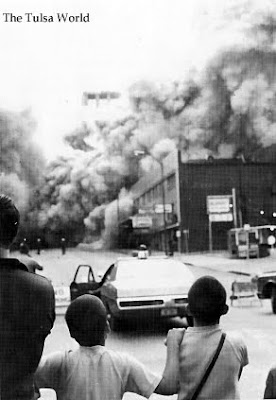 The Medical Arts Building sat at 6th and Boulder.
It was impractical to heat and cool and
was imploded in July 1970: 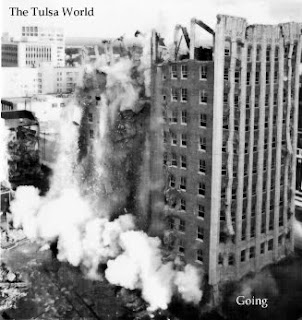 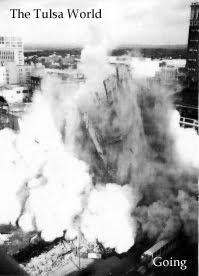 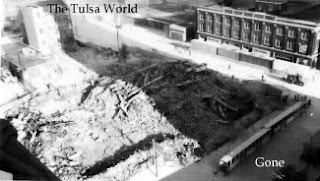 When the old Lynch Building came down there wasn't even a crowd-pleasing implosion.  The building housed one of Tulsa's first movie theaters, The Lyric.  As the 2-foot thick walls of hand-cut stone crumbled down, one could see a bit of the balcony and decorative fake windows. 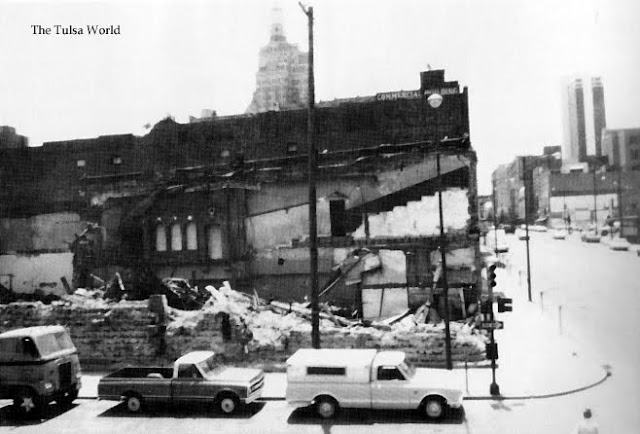 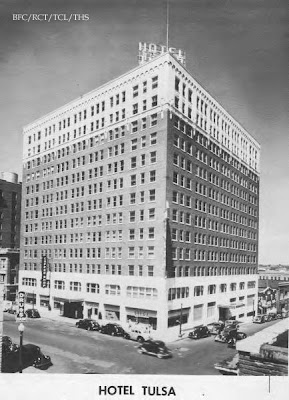 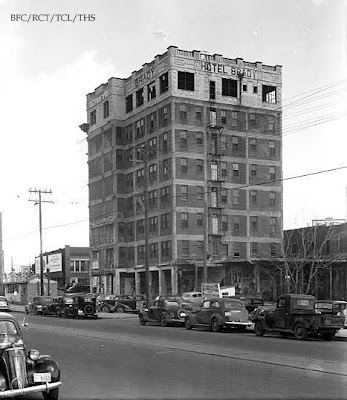 This photo was taken in 1973 during the transition.
While Tulsa's pioneer district was gone, there would soon be the
Williams Center and the Performing Arts Center:
(click on photo to enlarge)

By 1978 the BOK Tower had altered the Tulsa skyline: 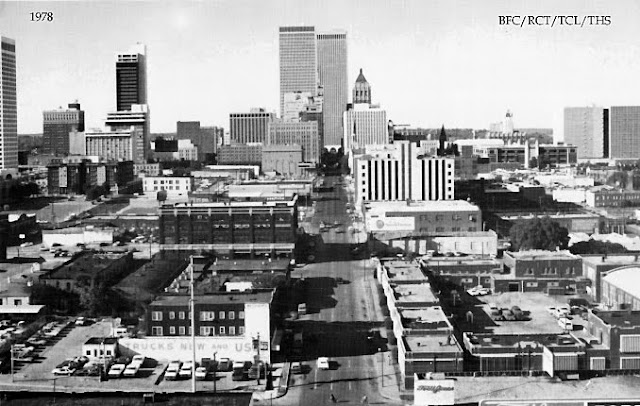 Very interesting. I've seen other pictures of some of the buildings before urban renewal. I'm not sure what the the best thing is. Somewhow repurposing buildings would seem to make the most sense. The Williams center is nice but forgettable. Basically a scale model of the World Trade Center. Pretty lame.

Lots of interesting photos. In some places there is the inclination to remodel historic building to at least preserve the facade. It seems that handsome buildings fall into such disrepair that the cost of bringing them up to modern standards is just prohibitive. It looked for awhile that the Mayo was going to fall in that category. Tulsa has managed to hang onto some of its historic buildings. Tulsa Central and the Frisco Depot being good examples. Nice post Nancy. Thanks.

Sometimes I can't decide which is sadder: the buildings when they are vacant and rundown or as they're being demolished. I guess it makes us appreciate the historical buildings that have survived and are being used even more.

Funny someone should say "Scale model of the WTC"... The BOK tower is by the same architect, and is the tallest still standing, though not the most distinctive of his skyscraper designs. I think Seattle's Ranier Tower has that distinction, though his design for the Darhan(sp?) International Airport in Saudi Arabia is beautiful.

MaurcusD~ I wonder why they dont have any pictures depicting the damage that urban renewal caused to the Greenwood District?

Even with the demolition of old Tulsa buildings Tulsa is still a beautiful town, the limitations in land secondary to surrounding cities have prevented Tulsa from the massive urban sprawl that Oklahoma City has experienced. Even the revitalization of Maps 1,2,3 cannot repair the damage endured from White flight to areas such as Edmond and Norman. Tulsa's neibor hoods. It is a shame that Tulsa did not seize the opportunity to pass a Maps type program before OKC. Tulsa would have been a much better city than OKC for such a program. The current renewal is great but will never be as successful as it could have been if done before OKC

It is a shame that Tulsa did not undertake the kind of urban renewal that Oklahoma City did. Tulsa would have been a much better city for such a project. Oklahoma City destroyed far more of its old buildings and it suffers from years of urban sprawl. Tulsa's neighborhoods are far prettier, and have much better architecture. Tulsa was saved from much of the urban sprawl as a result of being surrounded by suburb cities. If Tulsa would have beat OKC to the punch and passed a MAPS type renewal project it would have benefited far more than OKC