Nearly every Tulsan has driven by Memorial Park Cemetery/ 51st and Memorial at some time.  Many of us have been inside the cemetery on more than one occasion.  And yet, did you ever notice the resemblance of this Spanish-style building to, say…. The Alamo?

The original owner of this private cemetery, C.W. Beck, used this style to honor his wife who was from San Antonio, so the story goes.  Built during Tulsa's oil boom in 1927, Beck wanted to build a modern cemetery, so he purchased 160 acres that was then about 6 miles outside of Tulsa's city limits and built the huge 5,000 square-foot chapel (now used primarily as offices).  This was some chapel.  The original doors are still used on the south side of the building- heavy wood, bound by wrought iron.  And inside you can see the high ceilings lined by cypress beams.  This chapel seated 180 and had a choir loft, pipe organ and a large frontier style fireplace along with 14 stained-glass windows  honoring Christian heroes.
Built at the same time was The Tower of Memories which has 20-pipe Deagan chimes that play melodies during the day and chime on the hour and half hour.  I'm fortunate to live close enough (and have most of my life, actually) to hear them most days. 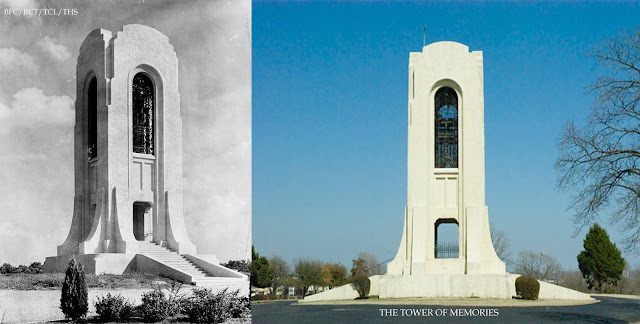 Beck lost controlling interest in the cemetery in 1933 but the cemetery has survived and grown to 240 acres.  And there are many interesting monuments and statues scattered about.

The American Legion Post dedicated their monument when the cemetery opened in 1927 to the men of WWI and later to all veterans.  Memorial Day services are held here every year. 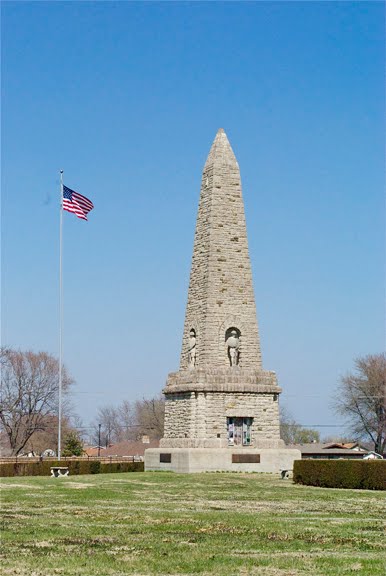 I had never noticed these sentries before. 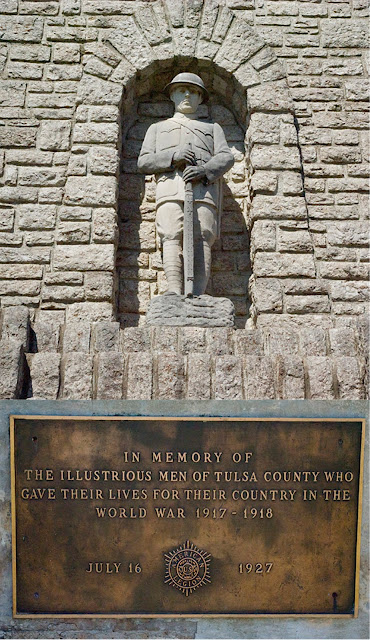 Around 1946 another chapel was built.  This one is designed more like an old English cottage with Bandera stone.  Inside an elaborate use of walnut makes it feel, indeed, like an Anglican church.  It seats 125. 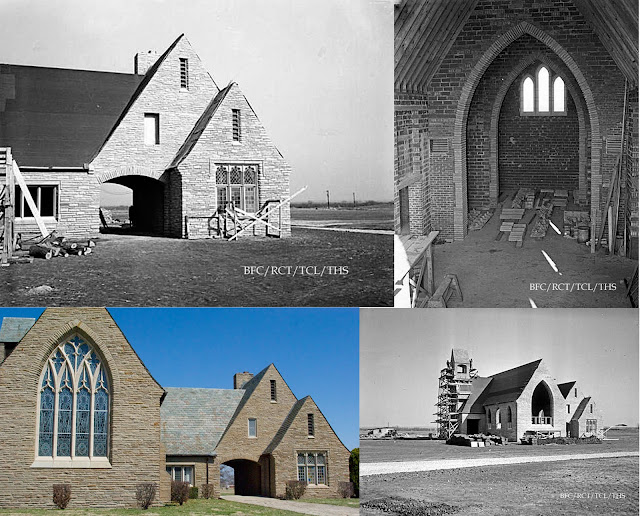 Also on the premises:  a stone reproduction of Da Vinci's The Last Supper, the Garden of the Apostles and this one that was built for children. 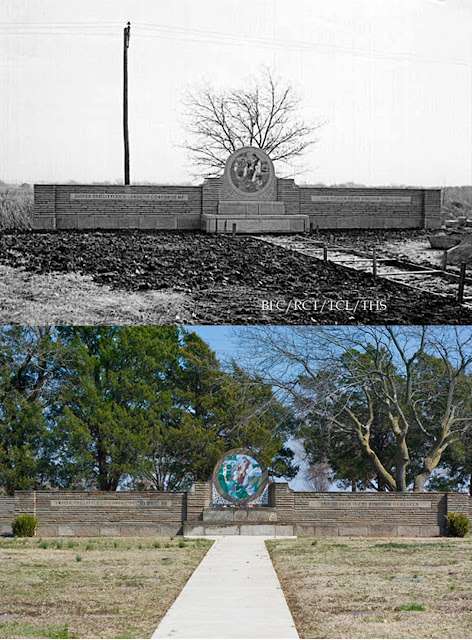 The 5-acre lake was drained, cleaned and refilled a couple of years ago.  The electric fountain that had been there from the beginning was removed. Currently more renovating and new family  areas are being added in this area.
-----------------------------------
Many people come here to see where well-known public figures were buried.  Wayman Tisdale's grave is hard to miss right as you enter off of 51st: 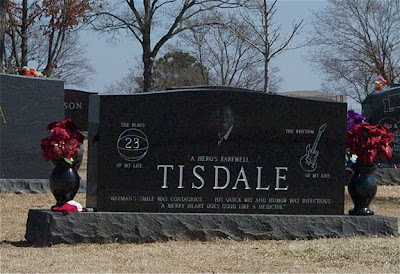 Prior to Tisdale's death, the number one visited celebrity grave was that of Bob Wills: 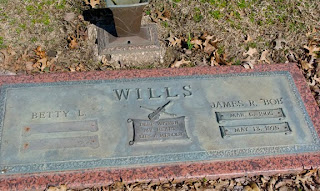 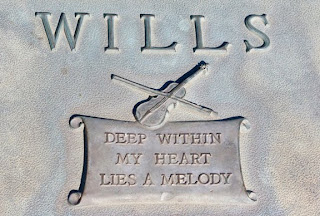 Many people that knew who Sam Kinison was (preacher-turned-crazy comedian) had no idea he was also buried here: 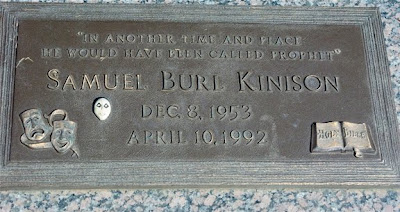 And of course, there are the local family names we all recognize: 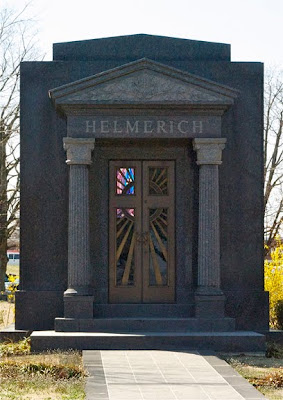 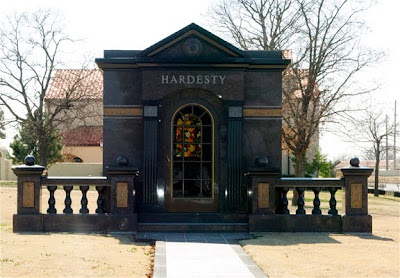 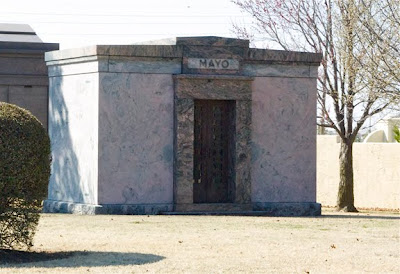 Rev. Oral Roberts and Billie Joe Daugherty are also buried here.
-----------------------------------
In 2002 the new Family Center was opened providing 10,000 sq. feet for larger gatherings, complete with kitchens.  It is similarly designed like the Alamo and blends in nicely.  Personally, I love this place not only because my family is buried out here (as will I be someday) but because of its natural beauty.  I took these photos last fall: 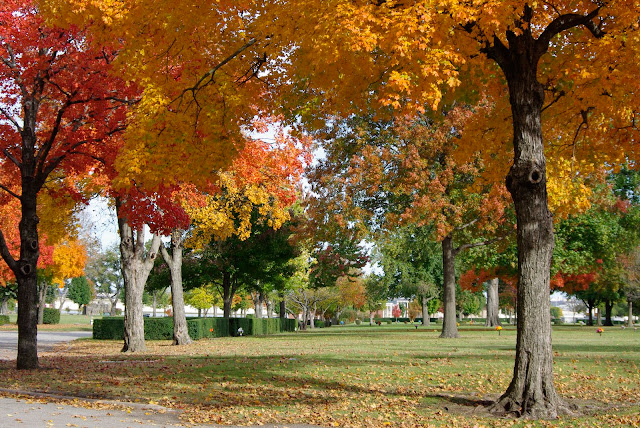 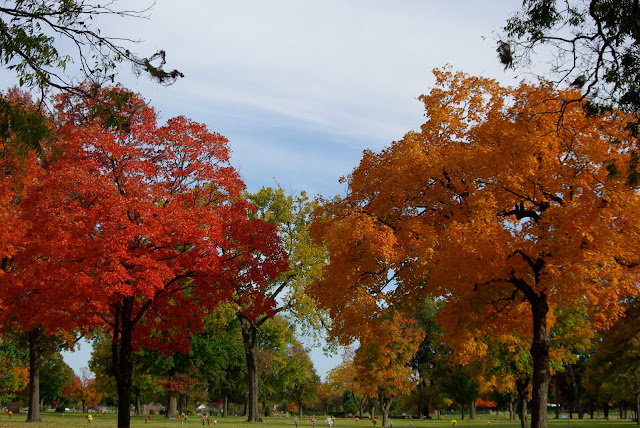 Memorial Park Cemetery is one of the country's 10 largest privately owned cemeteries and a wonderful asset to our city.
Posted by Nancy at 10:31 PM

Good post. This was all new information to me.

It's a great place. If you are a geocacher. The graves of Bob Wills, and Sam Kinnison are virtual geocaches. Also interred is Susan Alamo, Tony Alamo's first wife, whose grave used to be a virtual geocache but has since been archived.

I just discovered your blog! Thank you. I am an Oklahoman so far back that I am not even sure what generation. I am (Marshall T Moore Elementary is named after my father's grandfather.) I am 2nd generation in Broken Arrow. Before that it was Tulsa on my father's side and Bartlesville on my mother's. I also happen to be adopted and my biological family is from the Bartlesville area for quite a few generations as well. I have been in Connecticut for 13 years and become more and more proud of my heritage every year. I am coming home soon and your blog is inspiring me to take my boyfriend to so many places (he has never been here) and Memorial Cemetery is on that list. Driven by more times than I could possibly count but never knew it's history. Thank you, agian.

Lauri,
I'm glad you found this blog, too! Come home to Tulsa- you'll be shocked when you see what's happening downtown!
Nancy

Great post! I found your site while searching for info on Swinney Hardware. I love Memorial Park Cemetery, so I could not resist clicking on this one. I had no idea it was so old. I think the cemetery would be a bigger asset if more people visited it (like a park). I do have family at the cemetery, but I usually go there because I think it's pretty. Thanks for the info!

Memorial Park IS truly beautiful, sometimes I will go there just for the solitude and reflect, marvel at the beauty, and how manicured the park is kept by the Memorial Park Staff is just wonderful. One of the most beautiful in the U. S. I've seen many throughout the country. Most of my family is buried there.
Rex

I love history and I have so enjoyed the history of this cemetery,i have been to the almino and that is what caught my eye thank you for sharing