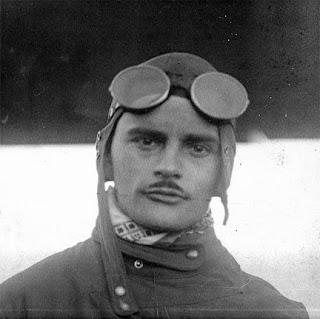 Duncan A. McIntyre was a former Air Force instructor and military barnstormer.   In 1919, as he was on his way to Spokane, Washington, he decided to stop in Tulsa to visit an old war buddy.  He ended up staying here until 1940, and making commercial aviation a reality in Tulsa.
McIntyre quickly realized that oil-booming Tulsa was ripe for starting an aviation business.  He and another pilot,  Bert Brookins, rented part of the Curtis Southwest Airplane Field and called it an airport. 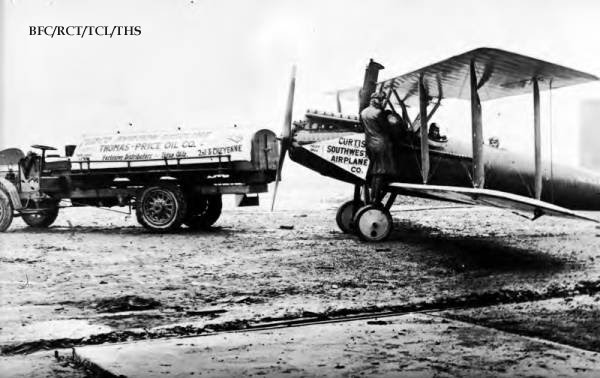 He began offering sight-seeing tours over the city for $20 and round trips to Houston for $400.  He soon had enough money to purchase 80 acres at Admiral Place and Sheridan.  With 3 hangars, offering sales, service and repair, the McIntyre Airport was official.

Here are some ladies from the Junior League having an aerial tea party with McIntyre in 1920. 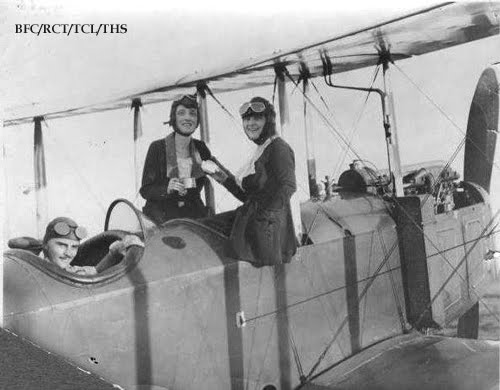 Patrick J. Hurley and Will Rogers at the McIntyre Airport in 1926.  Hurley would later become the U.S. Secretary of War. 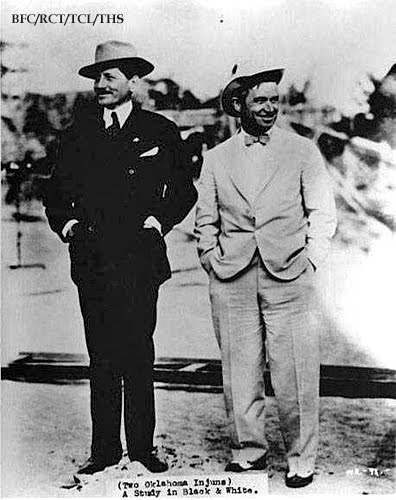 Within a few short years the McIntyre airport was considered by many early flyers to be one of the finest airports in Oklahoma.  With it's sod runway and fields, his airport was chosen as the site for a military Fly-In in 1925.  The Army and Navy brought approximately 35-40 aircraft to the site, including the all aluminum Hamilton fighter plane (U.S. Army) and the Vought Navy aircraft. 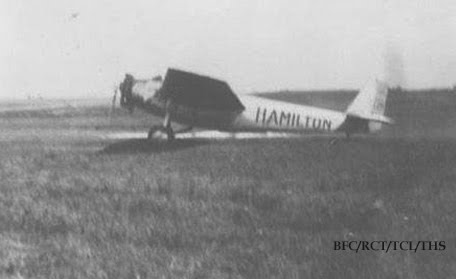 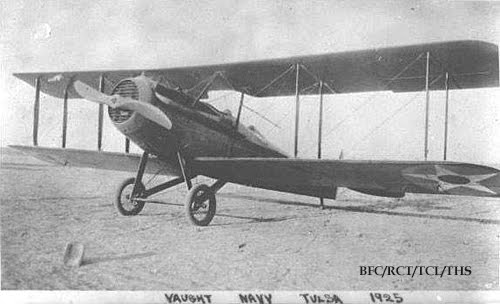 On September 30, 1927 Tulsa aviation history was made when Charles Lindbergh, fresh from his non-stop flight across the Atlantic Ocean, landed The Spirit of St. Louis at the McIntyre Airport.  Schools and businesses closed for "Lindbergh Day" in Tulsa and thousands turned out to cheer. 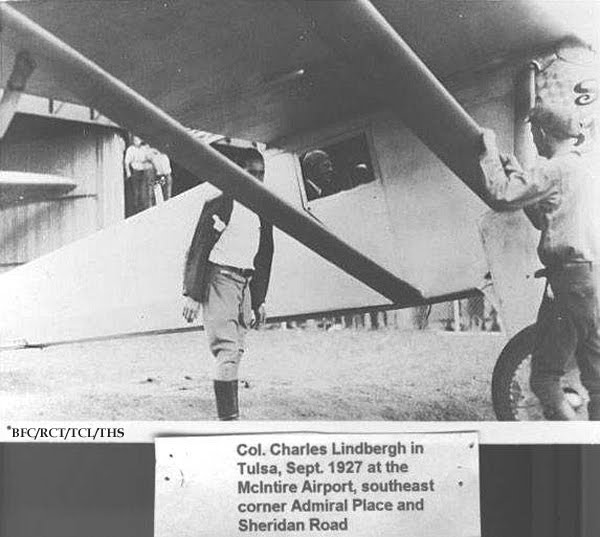 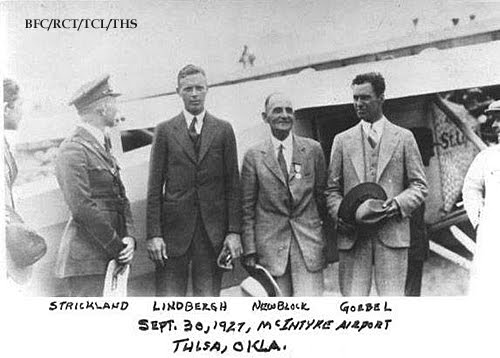 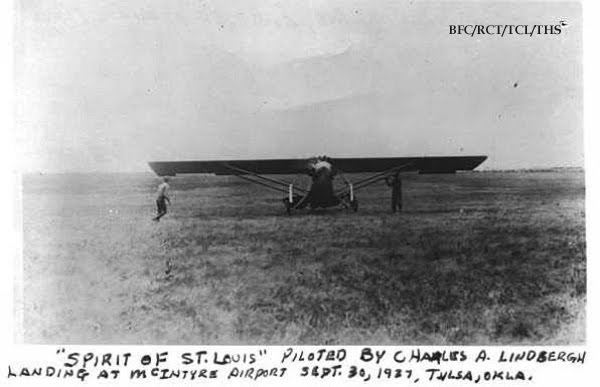 Also on hand was another famous pilot named Arthur Goebel.  He piloted his "Woolaroc" non-stop across the Pacific Ocean to Hawaii and wanted to greet Lucky Lindy.  The Woolaroc was sponsored by Phillips Petroleum of Bartlesville and Frank Phillips accompanied Goebel that day. 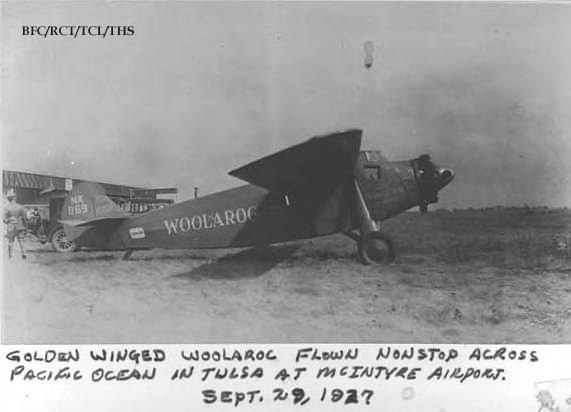 Henry Ford got into the aviation business and wanted to promote his new Tri-Motor airships by launching a city-to-city "flying circus" called the Ford Reliability Tour in 1927.  Although the McIntyre Airport had hosted fly-ins, it was too small for Ford's extravaganza. W.G. Skelly, however, made arrangements for planes needing refueling to do so at McIntyre. 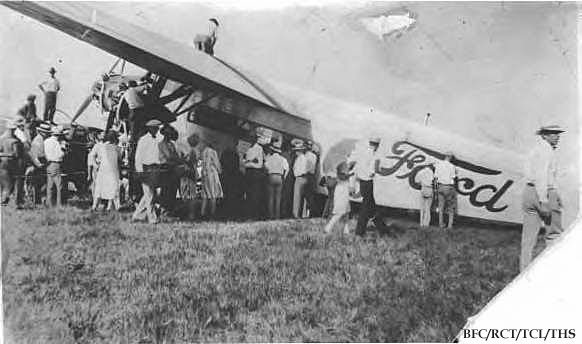 Tulsa was told it could be a stop in 1928 if, in six months, they could put together an airport that could handle 50 airplanes.    With no time to spare, 47 of Tulsa's wealthiest businessmen, led by Skelly,  signed the Stud Horse Note for $172,000 to purchase a 320-acre tract of land at Sheridan and Apache.  A wheat field was mowed into 2 runways, a shabby barn-like building was thrown up within a week and, on July 3, 1928, Tulsa Municipal Airport was ready to open and host the tour. 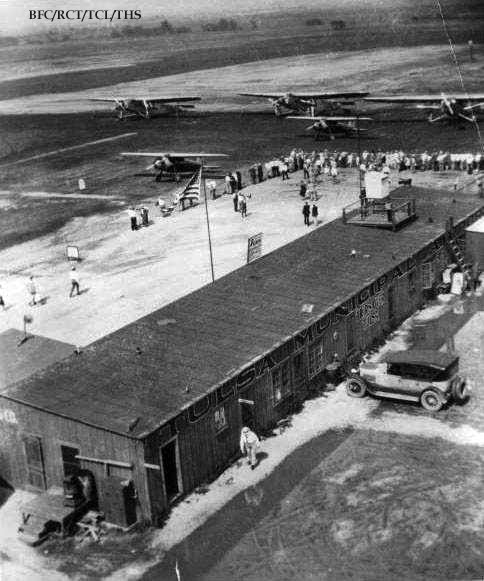 D.A. McIntyre, "Father of Tulsa Aviation", moved to California in 1940 to take a job with Lockheed.  He returned to Tulsa one more time in 1961, to dedicate the new terminal that would be renamed Tulsa International Airport.
Sources:  Tulsa Times: The Boom Years, The Tulsa World

Quite the "Daring Young Man in his Flying Machine". Nice airplane photos.

Are any of those from Grandpa? lol

Is anybody still around from this page? I have some questions about obtaining some information

I work in the Boiler Room, inside the Mayo Hotel. There are several of these pics in and around the hotel. Stop in. I have lots of stories!

Did Duncan McIntyre barnstorm or give rides at fairs in the Pacific Northwest?