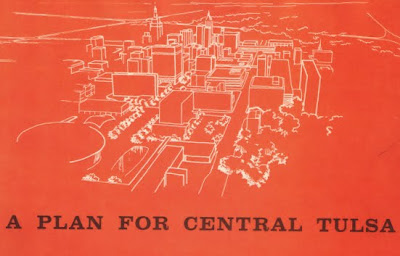 In 1959 a booklet was produced called "A Plan for Central Tulsa" that had new concepts and ideas that would help keep downtown Tulsa thriving.  Written by California architects and paid for by a group called the Downtown Master Plan Committee (which was primarily downtown merchants and business owners), it encouraged the then newly formed Urban Renewal Authority to "begin as soon as possible to take advantage of the opportunities offered by the new (Oklahoma state) legislation"  and offered some interesting ideas and concepts that sound very familiar today.  The writers of this book encouraged IMMEDIATE action on this plan if it were to work.  In fact, Tulsa apparently did implement some of these ideas but at a much later date.  Too late, most would say.  This booklet explains some of the mysterious changes that took place in downtown Tulsa during the 60's and 70's.  The mall/fountain area and the one-way streets, to name a couple.


The IDL had just been approved and was essentially a "done deal" so, with that in mind, these planners came up with some rather unique ideas for optimizing and revitalizing downtown.  This was well before the Williams Company came along and, I'm guessing, screwed most of this up.  Anyway, this General Development Plan was geared using 1975-1980 economic projections and was for both public and private development.
Foreseeable needs were keeping retail business active and growing; having personal service establishments- laundry, barber, beauty shops, shoe repair; having additional medical and dental facilities; more office space as well as hotel/motels and multi-family dwelling units.
Studies were sited from 1955 showing the estimated needs for more parking.  It was suggested that the streets could be improved and capacity increased by removing through traffic and routing it around the central area.    To accommodate the needs for new parking and better downtown circulation, the Plan includes major one-way streets to connect to expressway interchanges and parking terminals immediately adjacent to the shopping core.  Immediate parking construction was urged in this Plan.
TULCENTER, the heart of downtown, was conceived as a pedestrian paradise with automobiles eliminated from the 12-block area surrounded by Boulder, Cincinnati, Second and Sixth Streets. Main Street would be transformed into a shopping center rivaling the best retail trade centers in the country.  Four blocks of Boston Ave would become a veritable office park for office workers featuring coffee shops, restaurants, bookshops and specialty stores.
Unified canopies along storefronts, trees planted -and all of this with no traffic.  There was to be separate traffic garages, close to the expressway exits. At two strategic locations, between Main and Boston, rest and Convenience Centers would be located.
"A lady would be able to park her car, walk under cover to her favorite stores and shop at her leisure without ever carrying a bundle.  Her purchases would be delivered to the Convenience Center pick up station and assembled in one package which she can then collect when she leaves.  She may meet friends at the CC for a cup of tea.  Benches, fountains and trees will create a park-like atmosphere in place of rushing cars and honking horns.  Street corner flowers stalls can add color.  A branch library in one CC, art exhibits, noontime concerts. All of this could all lead to a return to 'old fashioned neighborliness' civic pride and friendliness."
Old Courthouse Square
At the time this proposal was written, the original Courthouse building sat at 6th and Boulder and was empty.  Since it was already owned by the public it was felt this was a very important idea to consider: providing shops and offices on the Fifth Street mall frontage, two- or three-level parking on the balance site with a roof deck promenade area to tie in with Main St activities.  On the roof, a garden restaurant could be developed which would be an expansion of Bishop's Restaurant on Main St.  "Thus a shopper could enter the garage at Sixth and Boulder, exit through the shops to Fifth or across the roof garden promenade.  The City, through Urban Renewal, could assemble the land around it (the entire half block on the east side of Boulder between Fifth and Sixth).  This idea is broken down into three detailed phases (which I won't go into).
Transportation Center
This proposal was to start with the existing Union Depot, adding bus operations and airline ticket and passenger check-in facilities.  Auto rental agencies and taxi services. In addition it would be advantageous to make room for a major post office central operational headquarters there as well.  And of course, more parking would be needed: one between First and Second around the Bliss Hotel and the other between Second and Third by the Hotel Tulsa.
North and West of TULCENTER, where the land use was mixed and blighted, would be made into light industrial warehousing and distribution center. South and East should be apartment and single-family housing.
The Oil Mart
Located in the "unsavory and run down section of Tulsa" between Boston and Boulder and north of First Street, the idea here was to have activities associated with the petroleum industry to be drawn together in a single convenient location along with office spaces for geologists and any other oil-related businesses.  There could be an oil museum, exhibit hall, etc.
Apartment Areas
Opportunities exist to create living patterns and housing types different and far better than any apartment area that now exists in Tulsa.  The conventional apartment building just won't do."  The suggestion here was to construct a variety of housing types for singles, families and senior citizens. 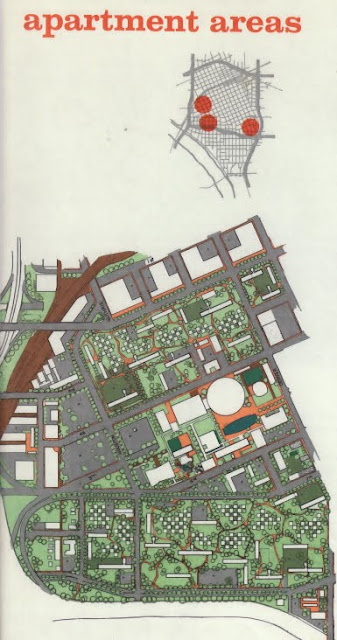 Cathedral Square
This plan called for realigning Boulder Street and making a park like setting for use at times when church use was not at its peak.
Marina
This idea called for creating a low-level dam below the 21st St Bridge and creating a large, clear lake.  Then constructing islands, a lagoon and recreation facilities for boating, fishing and water skiing in various areas of the river.  "The Marina would make living in central Tulsa the envy of every western city dweller." 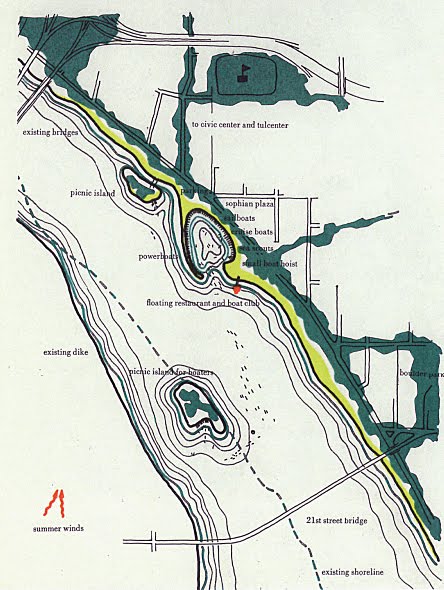 In 2007 writer Michael Bates touched upon this Marina idea in an article he wrote for Urban Tulsa:

We can only wonder "what if" most of these ideas had been implemented quickly, as was recommended.  Would it have revived downtown Tulsa?
Posted by Nancy at 6:15 PM