During the silent movie era, theater organs were built in a variety of sizes, filling the gap between a simple piano accompaniment and a full orchestra. The Majestic Theater housed Tulsa's first theater organ that was of significant size. House organist was Wade Hamilton. The organ is on the right side of the orchestra pit area: 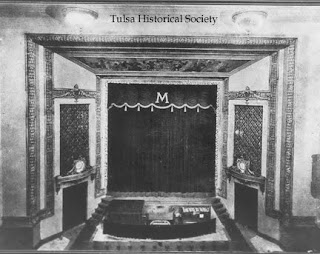 When the Rialto opened in it's "new" home (formerly the first Orpheum) in 1926, it had the second largest organ of any downtown theater.
Theater owner Ralph Talbot hired Wade Hamilton and his brother Howard to design the organ for the Ritz. Installed in 1928, the cost: $40,000. This is Hamilton playing at the Ritz: 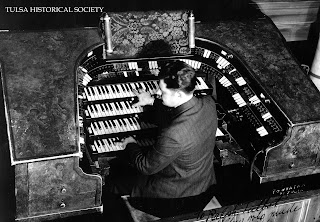 Hamilton was the Ritz's house organist until he moved to California in the 1930's, at which time Milton Slosser became the organist there, traveling back and forth between Tulsa, St. Louis and Memphis. In St. Louis he worked at the Ambassador Theater: 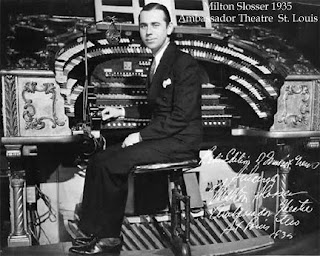 Many Tulsan's fondly recall how the organ rose up from the Ritz orchestra pit for solo performances during intermission. The projectionist would bathe the console with colored spot lights to reflect the type of music being played. 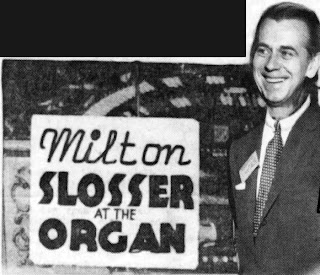 The Orpheum had a Wurlitzer and was one of the smallest of the downtown theater organs. You can see it clearly in this 1948 photo of Glenn Condon interviewing Gene Autry: 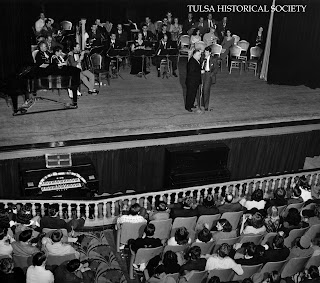 After the development of sound movies, theater organs remained installed in many theaters to provide live music between features. After the 1930's, though, many were scrapped or sold to churches, ice and roller skate rinks and private homes. It was during this 2nd era of the organ that the American Theatre Organ Society was formed. Click here to go to the Sooner State Chapter of this organization and learn more.
Posted by Nancy at 10:26 AM

I wonder how many of those old organs are hidden around in plain sight without people realizing what they are or their historical value.

Phil Judkins (over at the Sooner State Chapter linked above) could tell you where most, if not all, of these organs are now. Some were dismantled and sold for pieces, some reside in private residences in other states.

My friend Bill Rowland is instrumental in the theater organ group. They have a free monthly program which is well worth attending.

More proof that I was born in the wrong period. Missed these glory days.

Speaking of home installations - as a once-upon-a-time Philbrook employee I had the privilege to poke around the organ and the fabulous pipes of the pipe organ installed there. Was pretty keen on organ at that time what with Walter Carlos and all. Also spent some time at Harwelden during those days. Was there an organ installed there? Don't recall one but it sure seems like the kind of place there might be.

Where are Tulsa's Theatre Organs Today? See below

Harwelden did not have an organ. Identical organs to Philbrook were installed in the Pariott Mansion at 31st & Lewis, and at the
C.W. Titus Mansion. (now Roy Clark's Home.) They were built by the Aeolian Company of Massachusetts. The Titus organ is still in the mansion but the disposition of the Parriott Organ is unknown. by Phil J.

We visited Philbrook in 2015 and the pipes have been removed.

When I went to Will Rogers High School in the late sixties, I remember (I believe it was called) the Shaw organ. There was a family that donated the organ in the name of their deceased son.