If you haven't eaten downtown in the Atlas Grill, you've missed out.  Great food, nostalgic atmosphere plus getting to the grill is always fun.  Sure, there's some construction going on right now but the New Atlas Grill is still open and worth the trip (and the construction is almost done).
Nestled in between the Mid-Con Building and the Philtower, the Atlas Life Building was completed in 1922.  The building is red brick with white marble ornamentation concentrated on the third, eleventh and twelfth floors.  The building was added to the National Register of Historic Places in May of 2009.  It will soon be opened by the Courtyard by Marriott.
The grill is located in the art deco lobby, across from the Tulsa Press Club.  I wonder how many photos have been taken of this great clock. 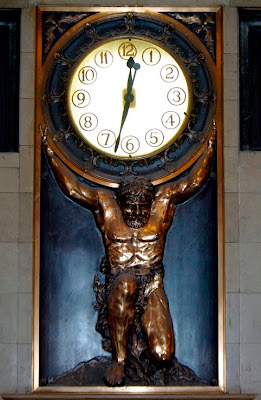 The 85 yr old eatery started out as a coffee shop.  Photos on the wall,  such as this one below help keep the character alive. 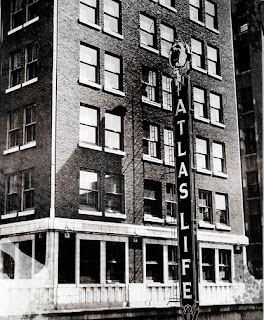 Open for lunch Monday through Friday and breakfast on Fridays, there are great daily specials.  We, however, ordered from the usual menu.  Any Tulsan has to love the names of these sandwiches.  I personally am fond of the sweet potato fries (when they have them).
Here is the building when it first opened. Waite Phillips had his offices in the Atlas Life Building until his own building was completed next door 5 years later. 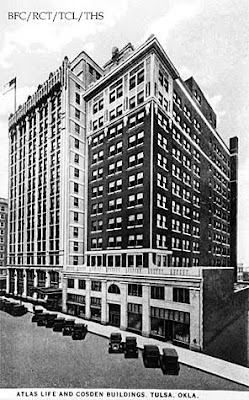 A crouching statue of Atlas is at the top. 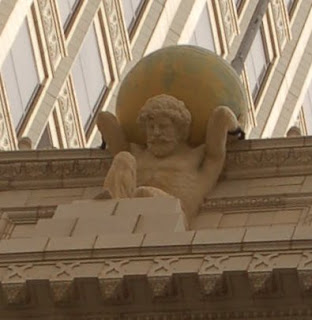 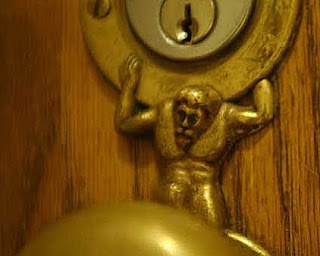 The building is probably best recognized by the four-story vertical sign which was installed in 1946. 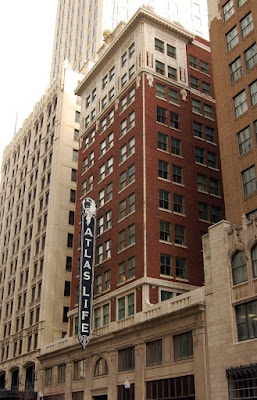 The building is seven bays wide at the base, narrowing to three above the second floor to allow some separation from the taller buildings on either side.
Sources: tulsapreservationcommission.org, newatlasgrill.com
Posted by Nancy at 9:46 PM