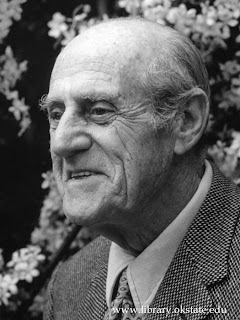 It was what Mr. Aaronson did civically that was inspirational and noteworthy.

GILCREASE MUSEUM
One of his first major involvements was in spearheading the movement to preserve the Gilcrease Musuem back in 1954. He presided over the “Keep Gilcrease in Tulsa Committee” which backed a bond election that raised the money to obtain the Gilcrease collection and thereby keep it in Tulsa.
TULSA COUNTY LIBRARY
He led an election campaign that provided the funding for building the new multi-county library system, which was being developed in 1961. He worked on the selection of the site for the new central library, served on the Library Commission and was active in the Friends of Libraries group.
TULSA HISTORICAL SOCIETY
During this same time of the early 1960’s, Aaronson had an epiphany of sorts. “I have lived here since 1913 and grew up with Tulsa. I never thought much about local history until one day when I suddenly realized that the memories of us old timers weren’t memories any longer- they were episodes of history to the new generation.” he told a friend.
The Conception- Aaronson set about in early May of 1962 to pull together a group of people who would be dedicated to saving the history of our local area. He called a meeting on May 8 in the Board of Directors Room at the Fourth National Bank and the “brain storming” session began. A proposition came forth that there was a need for the formation of a county historical society. It was noted that many Tulsans were unaware that no such organization existed and that time was eating away the number of early-day Tulsans who could give eyewitness accounts of important historical events. Everybody present agreed that for the most effective preservation of community history, the work should be centered in an organization. A group that would be charged with the responsibility of collecting, assembling and indexing all available records and material dealing with all possible phases of our past to show the growth and development of the area. This material would then be available as an invaluable source of information for students who might need such information in their studies. It was suggested that this new society be given quarters in the new Central Library with a Librarian as custodian.
A Reality- within 6 weeks of this meeting Aaronson had an overflow crowd of about 125 who gathered at the Court House to participate in an organizational meeting. The group promptly elected a complete slate of 42 directors with W.E. (Dode) McIntosh as its first president. “Our members will make this a huge success” he remarked. And they did. 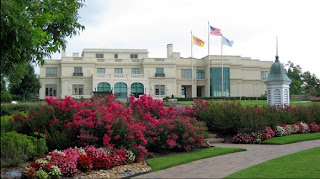 TODAY
The Historical Society did reside at the downtown library for a number of years. Then it moved to the home of Thomas Gilcrease (near the museum) from 1985-1998. In December of 1997, with funds made available through the Tulsa Tribune Foundation, the Society purchased the historic Samuel Travis Mansion off Peoria Avenue, just south of the Tulsa Garden Center. The mansion has been expanded and renovated to serve as the Society’s new home with 8 exhibit galleries in which to illuminate Tulsa's rich history as well as the Tribune Research Library, which is available for use by appointment.
Additionally, the Society manages information requests from the public, provides lectures for schools and civic groups, and sponsors educational programs. All of this while remaining a private, non-profit corporation. And it takes one very important ingredient to keep these programs going and those fabulous doors open: The volunteers. Known as the Guardians, this is a fun group of people devoted to Tulsa's history and to sharing it with students of all ages as well as adults. It is a group I am happy to say I belong to and I invite anyone else interested to do the same.*
Mr. Aaronson himself summed it up best when he once said, “I’ve had a good life, but the satisfaction you receive from something you do without getting any monetary return far exceeds anything else.”
I couldn't agree more.
*Stop by the museum or call 712.9484 for an application.
Posted by Nancy at 4:06 PM

Thanks for this post. The Gilcrease Museum and the downtown library were two of my favorite places as a kid, and looking back I can see that they were a big part of my growing interest in history and the arts that eventually led to a career. It's nice to know who I have to thank for them.


I have been reading some on-line old newspaper articles wherein the clippings state that two Travis Brothers claimed that the Aaronson Brothers company owed them nearly $475,000. Do you have any idea where I can find the outcome of this incident? Many Thanks...

I do not know if the Tulsa Historical Society has any more information on this or not. It might be worth contacting them to see, though. Iswart@tulsahistory.org - Ian Swart is the archivist and curator.