Last July I blogged about one of Tulsa’s founders, Colonel A.D. Orcutt. I mentioned his 2nd wife, Adeline, and noted that I would write more about her at another time, which I will. But first, a little of her family history.
-------------------

A descendant of Benjamin Perryman, Alvin T. Hodge was born on April 15, 1845 in Choska, Indian Territory. Educated at the Tullahassee Mission School, he married Mary Jane Burgess, a Cherokee and together they had 9 children, with Adeline being their oldest child. Alvin was a farmer and stockman, and one of the wealthiest of the Creek Indians. "My father owned just about all of Tulsa (county)" his daughter was once quoted as saying.
In 1884, a couple of years before Adeline’s marriage to Colonel Orcutt, Alvin Hodge moved his family to Tulsa and built a small dwelling near Third and Main. 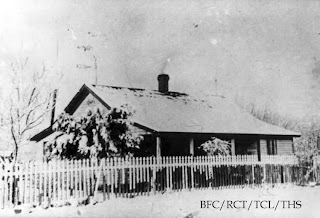 Soon he was appointed special Judge by the Creek Nation Council and built a farmhouse at what is now 8th and Elgin Ave. He fenced in a pasture beginning at Elgin and running east to Lewis and pastured cattle there. Adaline recalled their nearest neighbor being George and Rachel Perryman. 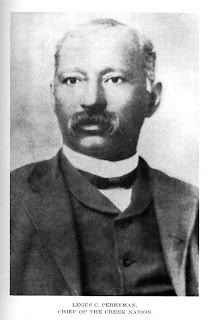 In 1887 Principal Chief L.C. Perryman of the Muscogee (Creek) Nation appointed Alvin as a District Inspector for the Coweta District. He then built a home at 8th and Detroit.
In 1900 Alvin Hodge served on two committees in Tulsa: Streets & Alleys and Public Improvements. Since he was a pioneer of Tulsa, Hodge Street (now known as First Street) was named in his honor.
In 1903 he developed a residential area in Tulsa and also during this time he gave to the City land for “cemetery purposes only” which is today called Oaklawn Cemetery. 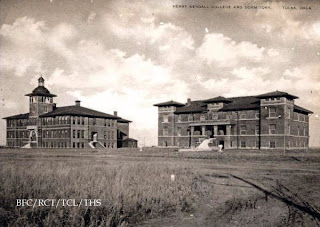 In 1905 Hodge sold land to the Methodist Church for the relocation and construction of Kendall College, now known as the University of Tulsa. He retired to his farm in Coweta and there he died at the age of 74 in 1919. Both he and his wife are buried in the Hodge Family Plot in Oaklawn Cemetery.
Sources: “Tulsa’s Magic Roots” by Nina Dunn; “Myriads of the Past” by Donald A. Wise; Tulsa World; digital.library.okstate.edu/chronicles
Posted by Nancy at 10:21 AM

Could you be specific as to your resources for information on Hodge? I'd like to quote your material, but the bibliographic resources shown are not specific enough for an article. Cathy

Myriads of the Past and Tulsa's Magic Roots are both books that are out of print but available at libraries. The OSU digital library has all of the Chronicles of Oklahoma online and one of those was referenced. I'm not sure which article I used from the Tulsa World for reference.

I have Dunn's book and found the Myriads at the Genealogy Lib. Hodge received a allotment deed to land around Whittier Square in 1903 - He sold land to Gillette and Hall in 1906, land where Whittier Square is located today Cathy

My grandma was a perryman by blood.

He was related to us as well. Like a great uncle or something.

Judge Hodge was my Great-Great Grandfather. His brother, David M Hodge, and Attorney, was also important to Tulsa. My 'Great Uncle David' was a co-author and interpreter for the first Muskogee - English; English Muskogee Dictionary. The Smithsonian link is here:

For those of truly interested you can download the PDF from the Smithsonian site above - or you can order a photo reprint via Alibris.com