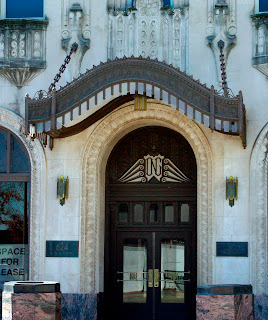 Last weekend approximately 40 or so curious Tulsan’s got up early and ventured out into the cold, windy streets of downtown Tulsa to see some treasures. Speaking for myself, it has to be something I really, really want to see or do that makes me get up EARLY on a weekend and then get OUT in the COLD! And this was something, for sure.The Tulsa Treasures Tour, coordinated by Tulsa Now was to begin in the lobby of the old ONG Building. That alone was incentive enough for me to bundle up, grab my camera and go. And I was NOT disappointed. I was wowed the minute I walked in: The light fixtures, the floor, the molding, the star theme….. 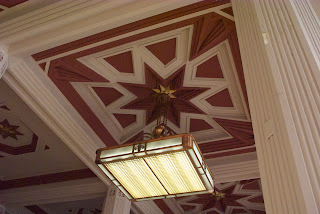 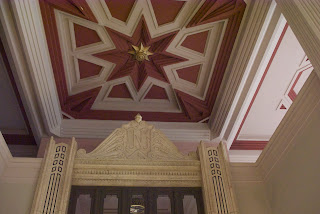 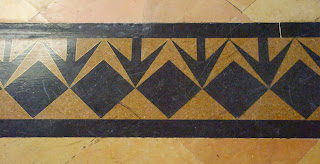 Pillars in the lobby: 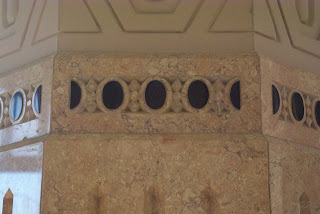 I find the elevators, building directories, and mailboxes in buildings of the oil boom era to be charming and exquisite. This one was no exception. 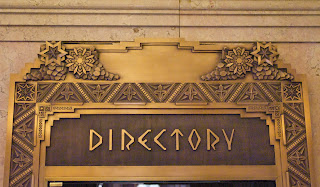 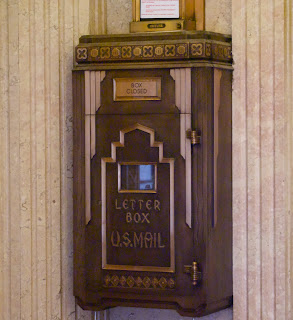 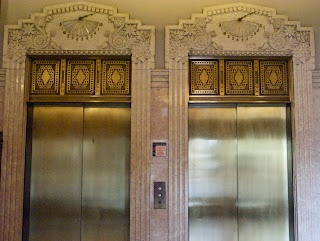 Built in 1928, the ONG building was one of (if not the) first of its kind (zigzag art deco style) in Tulsa.
Our group then stepped out the east door of the lobby, onto Boston, and listened while architect experts told stories about other buildings of interest. I gazed at my beautiful city and tried to capture the moment. 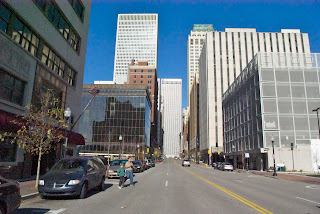 Across the street was the former Ponca City Savings and Loan Building, a Mid-Century style building that is awesome: 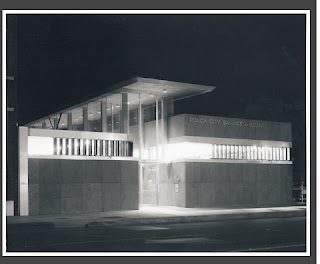 Unfortunately we did not get to tour this building inside, as we hoped, which was a shame. That did not stop our tour from discussing the architecture and history of this building as well as the Chase AutoBank that now occupies that corner. I have always liked this wall that is out there: 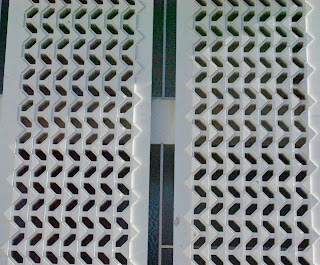 Next we got to go across the street, north, and see another rarity: the ARCO Building. More on that in the next post.

Oh! I was there! Thank you for taking such lovely pictures. I can't believe I was on a tour with the Tulsa Gal and I didn't even know it! (I was one of a pair of sleepy-eyed, underdressed sisters who shivered very hard and barely spoke. It felt very early and very cold!)

Hi Kate! I was the ugly- (although not under)- dressed person who was more interested in taking pictures than talking, too. When it comes to staying warm, I obviously don't care WHAT I look like and was therefore fairly anonymous (except for the other Tulsa Historical Society volunteers whom I may never be able to face again for awhile).

Oh my goodness! Amazing, wonderful blog! So glad to have discovered you. I am also a 3rd generation Tulsan, and my parents are amateur Tulsa historians -- I'm passing this along to them ASAP. They will love it, too. I am also a blogger {though not about Tulsa, per se}.
Cheers,
Tara
http://nothing-elegant.blogspot.com

Oh thanks so much Tara! I visited your blog and loved it, too!

The inside of the old Savings and Loan is a mess. We're trying to get it cleaned up, though.

In 1960 I worked in that lobby as a cashier for ONG. A lot of people came in to pay their gas bills there. It was a huge open area with a large square counter that the cashiers sat inside of. I think there were 8 of us, two on each side of the square.