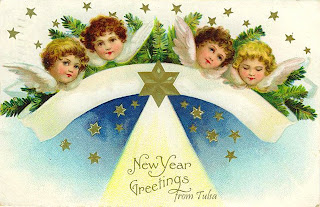 New Years Eve. A cause for celebration, no matter how big or small the town or city may be. Looking back through some historical information, celebrations were a bit different back at the turn of the 20th Century.
Example:
"At the stroke of twelve The Times cannon on the Times Building boomed out a farewell to the old year and century and thundered a merry welcome to the new. This was the signal for a general uproar. Bells, whistles and guns joined in the clamor, and the crowds cheered from street to street. The past century has failed to improve upon the tone of the tin horn, and this exquisite instrument of torture and pandemonium soon predominated. No only did the omnipresent small boy yield this effective air splitter, but women and men in dignified walks of life blew the tin noise dispensers until their lungs refused to do further duty."
-- The Los Angeles Times January 1, 1900
We no longer shoot canons or guns off (legally, anyway) but those horns- be they tin or paper- are still annoying.
Another example:
"New York City outdid herself...a riot of colored electric fire, hung from invisible wires, in a plaza surrounded by Titanic skyscrapers...a splendid chorus of human voices singing the glories of 'The Star Spangled Banner' beneath a lettered 'Welcome, 1900.'"
-- The New York Herald January 1, 1900
It would be great if folks still felt compelled to burst out in our national anthem at such a time, but that seems unlikely in this day and age.
And then, there were the "killjoys" in San Francisco:
"'No monkey shines this year' appears to have been the order of the day issued by Police Chief Sullivan. The 1899 celebration had been characterized by indiscriminate public kissing on the part of persons who had not been properly presented to each other. Chief Sullivan, the killjoy, planted five cops at each corner of Market Street and ten along each block. It was a cold, clear, windless (and comparatively kissless) night."
-- Nation's Business, January, 1900
These youngsters posed for this photo on New Years Eve 1908 here in Tulsa: 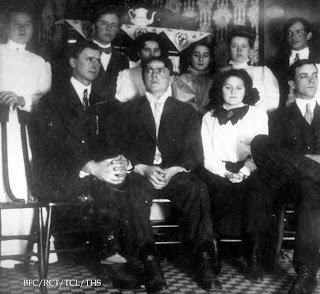 Not looking too cheerful. No indiscriminate kissing here either, I'm sure.
I hope everyone reading this has (or had) a great time on this New Years Eve. I am looking forward to 2010 with great hope and excitement. Cheers!
Posted by Nancy at 8:29 PM

People typically look very solemn in these old photos. The reason being that when inside the process required a rather log exposure time. Any smile held for a long time looks rather idiotic, so the subjects tried to loos serious for the camera. As a result people either looked drunk or dead.

Things have sure changed in San Francisco now. I love the old photograph. I always wonder who they are? do they have descendents in Tulsa?

That photo is sort of dismal, isn't it? Looking forward to your posts in the new year!!