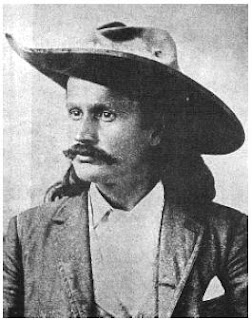 This is a Christmas story adapted from The Tulsa Daily World, December 21, 1930. I hope you enjoy it.

Major Gordon Lillie was known to thousands of fans of his Wild West Show as Pawnee Bill. In his younger days he had been a cowboy in the Cherokee Outlet (aka Cherokee Strip). According to a story he told, one of the earliest appearances of Santa Claus and a Christmas tree in that part of the Territory was in 1880 on a ranch where he worked.

Old man Constable had just returned to the Strip from running 20,000 Texas Longhorn steers to Armour and Company in Chicago. In that bustling city, the cattleman had been impressed by a beautiful Christmas tree at one of the world’s largest department stores. When Constable returned to the Strip, Christmas was only 5 days away, and he decided they had to have a tree for the ranch. When he suggested this to the other Cowboys, a lively discussion ensued:

“Whar you goin' to get the evergreen tree from?” asked old man Wharton.

“Why, down on the Cimaroon River. It’s only one day’s drive from here. We’ll send Scotty down in the morning.”

“Whar you goin' to get the people from to give your presents to?”

“From Berry’s ranch on Stillwater Creek, from Walker’s ranch on Big Greasey and from Bar X horse ranch on Hell Roaring, and all the other ranches around here.”

“Wall, now, listen boss. When I was a boy in Maine, I attended more than one Christmas tree celebration and they are run for the benefit of the kids, not the grown-up people.”

“Wall, I hadn’t thought of that. I tell you what we can do. We can get that red-headed freckle-faced kid over at the Circle C ranch. He is the funniest looking kid you ever saw, and his daddy is a good fiddler. We’ll have him come over to furnish the music.”

Constable won out, and Scotty left the next morning to search for an evergreen along the Cimarron River down near Oklahoma country, land used at that time exclusively by large ranches in the strip for running cattle. When he found one he thought Constable would take a fancy to, he chopped the bushy cedar down, tied the branches close to the trunk, and attached it to the side of his horse. He then set off for the ranch, and when he set up the tree, all the cowboys elbowed each other with delight. With great frivolity the rowdy men set about the task of stringing popcorn to decorate the tree.

Men came from all the other ranches in the area, and little Red Rankin was happier than he had been in his entire seven years. Most of his short life had been spent either on a ranch or in a covered wagon, and such splendor and extravagance was a wonder to that freckle-faced kid.

According to Lillie’s account, the ranch cook served up a wild turkey dinner, which all the cowboys bragged was the best they had ever tasted. They then lit up their pipes as they sat back to enjoy the fiddle playin’ of Red Rankins’s pa. Pawnee Bill recalled that the boy “had just mounted his spotted hobby horse, which was the capital present presented by Dad Constable (who had dressed up like Santa), when a volley of pistol shots rent the air, and the most unearthly cowboys’ yells broke the peaceful quiet of the Christmas festivities.”

Dust was flying as Ike Clubb and his friends raced up on horseback hollering that the U.S. Marshal was after them. Without bothering to dismount from their steamy horses, the riders came on into the half-dugout serving as a ranch house, breaking right through the wagon sheet hung over the unfinished side of the crude structure. Breathlessly, they described how the Marshal just over the border in Caldwell, Kansas had ordered them to forfeit their guns while in town. They had refused to obey the new law, whereupon Marshal Bill Tilghman had immediately deputized a bunch of Texas cattlemen on the spot! What a ridiculous group of emergency deputies they were- all lit up purty well! Deciding there were better places for them to be, Clubb had told his cohorts as they left Caldwell, “Boys, come on. Let’s not have any killing on this beautiful Christmas day. We’ll go down and see Dad’s Christmas tree.”

Clubb and his cronies thus had turned their horses around and started to ride leisurely back to the ranch, but before they reached the Kansas border, they realized that Tilghman and his men were hot on their trail. Clubb explained to Dad Constable, “So we hiked it for your ranch. They are not over a half-mile behind us. They would have caught us had I not occasionally sent a Colt’s bullet back over their heads, which slowed them up some.”

One of the cowboys suggested that Ike disguise himself in the Santa Claus suit and wig. When Tilghman arrived a few minutes later, Santa greeted him with a bottle of Old Crow and an invitation for all to join the party. Later, as the Marshal and his bunch bid Ike, Dad and the other cowboys good bye, “They were profuse in thanks for their entertainment and the view of the first Christmas tree ever erected in the cattle country of the Cherokee Strip,” recounted the great storyteller, Pawnee Bill.