Other nostalgic memories of the Downtown Tulsa in the 1950's and 60's that Mr. Burns shared with me:

Locust ParkOne of the first city parks, located between 13th and 14th, from Cincinnati to Detroit, Burns recalls it having a tennis court, wading pool and public building (post office?) where people voted. And now, if you look on a Google map, you can see where the park was- it is noted as Locust Playground. click on photos to enlarge 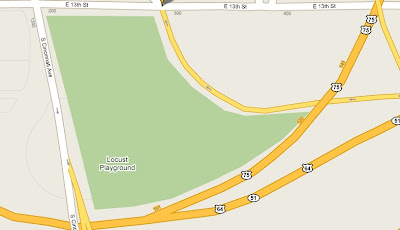 A view (via Google): 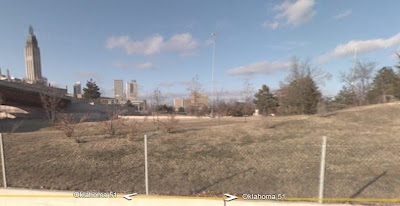 Here is a newspaper clipping from the 1950's featuring neighborhood kids and Locust Park: 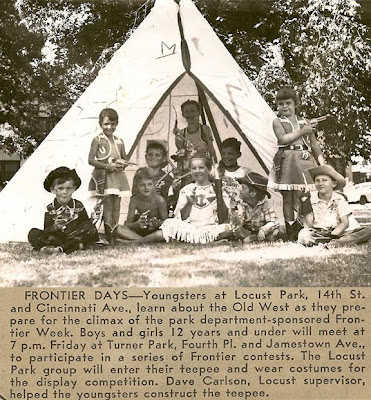 Burns attended Riverview School which was located around 12th and Guthrie- 512 W 12th. This photo shows the school from a distance (12th and Denver): 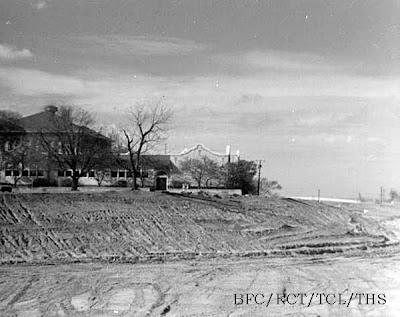 The place where the school once stood is now a Firehouse. However, if you look closely at the parking lot, you can see the raised cement border indicating where the playground was: 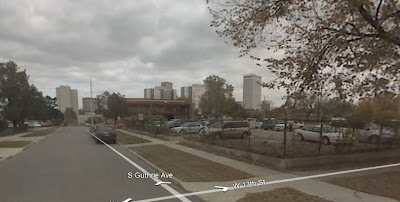 For more interesting information, photos and history on this neighborhood visit the Riverview Neighborhood webpage..
Burns recalled the neighborhood around where the Civic Center now stands. In this photo, taken when the 1957 Plymouth was going to be buried, you can see that neighborhood in the background. This was in front of the courthouse on Denver: 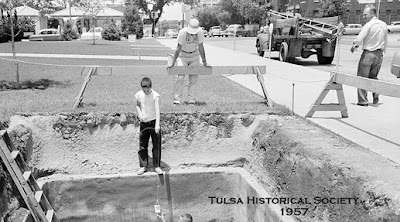 More pictures from the downtown neighborhoods-
3rd and Denver, 1953: 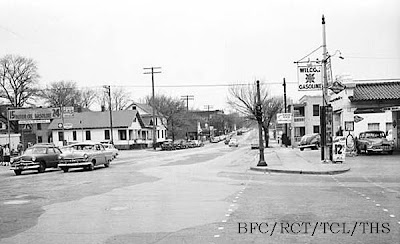 West Denver between 4th and 5th (new courthouse in back): 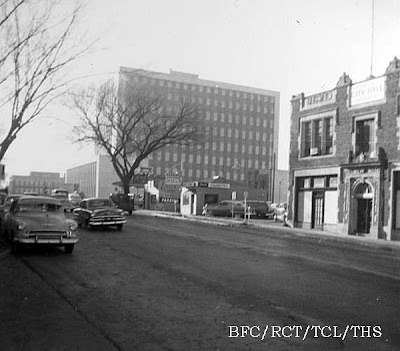 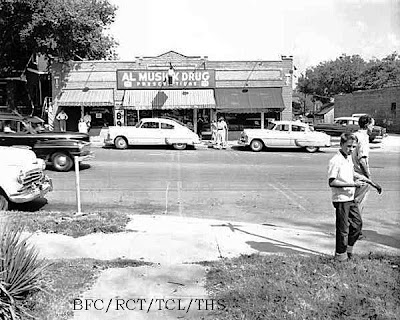 A few more miscellaneous items he shared with me: 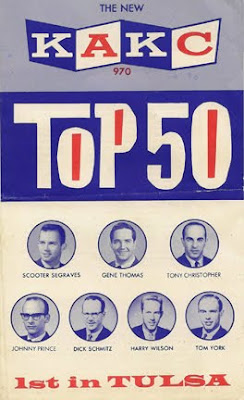 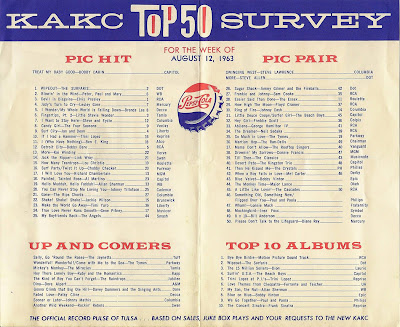 More memories:
"I remembered Hackett's bowl for two reasons, the one on Main had pool tables and my little brother was in a league on the one off Detroit. My mom told me the first TV they ever saw was at the Green Dragon Lounge on the corner of 15th and Main. 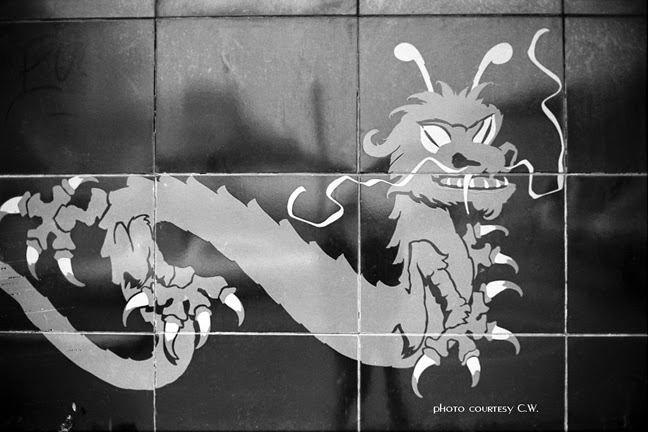 Do you remember Coleman's on the other corner, home of the cowboy sandwich?"

Wow!!! KAKC and Scooter Seagraves...now that brings back some memories. I was a sophomore at Edison in 1963.

Very interesting. The vanished neighborhoods near downtown have always interested me.

Driller: I knew the KAKC item would draw an interest!
Yogi: It's so amazing to me- the way things used to be.

Ah, the 1950's. A more innocent time for sure. I would walk all over town (Wagoner) to see friends, play baseball, whatever, and as long as I was home in time for supper my mother had no reason to worry about me. Kids do not have that kind of personal freedom any more, and it is a loss of experience that will not be replaced.

The photo of Riverside School seems to have been taken much later that the 1920's. Having grown up near Sheridan Village I was not really familiar with the area south of Oklahoma Osteopathic but the the area in the foreground of the photo looks like the road work done when the inner dispersal loop was begun in the 1960's. M D Terry

Thanks for the input, MD. I appreciate it!

" Do you remember Coleman's on the other corner, home of the cowboy sandwich?"

My older brother remembers the name 'Coman's', remembers eating there, and remembers, vaguely, it being on the northeast corner of 15th and Main. Later, that spot was occupied by Jerry's Restaurant during the 70's. I wonder if Coman's closed and Jerry's opened on the same site?
Coman's might have been situated half a block north on Main earlier - but who doesn't want a corner lot with ample parking?!

I do know that there was a Coman's Grill that was located on 15th and Peoria in the late 1940's and was a popular place to go after movies and hockey games (according to their ad which can be seen here:
http://www.tulsagal.net/2009/08/downtowner-part-4_30.html

Coleman's sat right at the northest corner of 15th and Main. We used to go there with my grandparents. We always had a waitress named Lucille, she was a little gray haired lady that caked on more makeup than I've probably worn in my life.

I remember Jerry's for their Chicken Fried Steak.Have not had any better since. After over to the Dragon for a draft Coors with a green olive in it! That was in the early 70's. Joann, Sharon, Cindy, any of you still out there?

That is my post! Richard Mock. Hung out there in early 70's. Heard it's all gone now. Did anyone save the Green Dragon tiles from the front door?