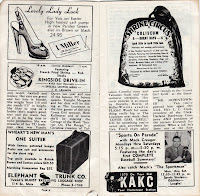 Did you know that the Elephant Trunk Company has been around since 1907? It has changed locations of course, but it’s still here, which I find amazing.

Drive-Ins evolved in the mid 1920’s. They combined the newest fad- automobiles- with food you could order from and eat in your car. Some drive-ins were also like mini stores, offering candy, gum, cigarettes and beer. My (paternal) grandfather owned such a place in Cushing, OK and even hired musicians to play outside for the customers in the summer.

And has anyone NOT been to a Shrine Circus when they were little? Granted, I didn’t get to go when it was in the old Coliseum. I bet that was really neat. (click on photo to enlarge)

The Coliseum was located on Elgin between 5th and 6th. It opened January 1, 1929 and was the venue of ice hockey, Monday night wrestling, Ice Capades, boxing and more. Hockey was a Tulsa passion from Day 1. With only a chain link fence on each end, spectators had to be careful of flying pucks and players. 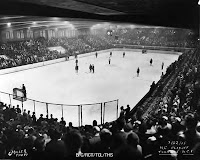 Many local high schools used the building for their graduations. Sam Avey owned this building, as well as the Tulsa Ice Oilers and the local wrestling league. The stadium held approximately 7500 people and was destroyed by a fire in 1952.

Mack Creager just starting out in the broadcasting industry at this time (1948). Mack was a Central HS grad who became a popular local sportscaster. You can read more about him here Mack Creager

This next page also has the line up for the KVOO radio shows- nostalgia deluxe. I also love what Wally says in the last sentence about Tulsa. 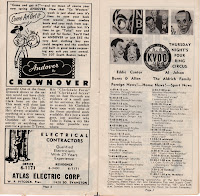 Next up: Are YOU a Mitty?

The Coliseum has a very rich history. Too bad it burned down. It might have got torn down anyway.

You are probably right.

My Dad told me that the highlight of every hockey game at the Coliseum was when the workers swept the ice during intermissions. No zamboni back then so they used brooms while wearing ice skates. None could skate so ankles were bent almost all the way to the ice.