I have been a Diamond Jack's fan almost my entire life. The first DJ opened in 1965 in the Country Club Plaza at 51st and Harvard. It was around in the back, where Crawpappy's is now. The 1880's saloon motif has never changed, although the ownership did once.

I was around 7 yrs old when we started going and have therefore had a life-long love affair with their Drip Beef sandwiches. Back then I ate 1/2 of a sandwich and took the other half home or split it with my mom. I really can't remember if there was a kids menu or not. Just the sandwiches, the potato chips and the pickle. And the potato (or bean) salad, too. Yum. 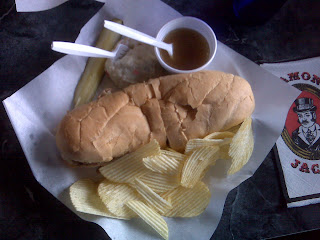 In 1967 Diamond Jacks expanded and opened a second restaurant over in Southroads Mall. In 1989 it changed hands and in 1990 it was the only DJ in Tulsa when the one in the CCP closed. The restaurant was forced to move in 1994 to to the 51st location: 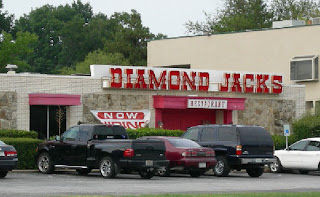 And in 2008 they were forced again to move, this time to their current location at 7031 S. Zurich. Wherever they go, I shall follow! 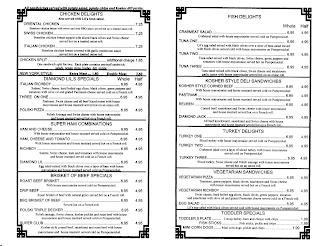 I've rarely strayed off the Drip Beef path. My mother was a fan of the Italian Rich Boy and the Diamond Lil. This is one of my hub's favorite, a Reuben 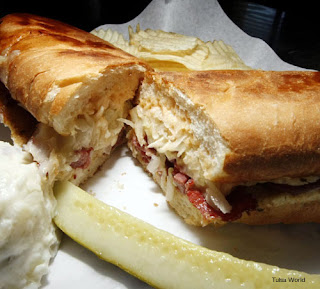 I'm not a big mustard person, but they have a "house mustard" that is just divine. It doesn't even taste like the American mustard we are used to. I now use copious amounts of that on my drip beef. There are squeeze bottles of it on the tables. Try it just once and let me know what you think.

I love that the owners have been able to keep the chandelier from the original restaurant in Country Club Plaza; it hangs in the main dining area. And the door pulls as well as the chandelier over the bar are from the Southroads location. Speaking of bars, it's too bad they couldn't bring that great bar that was also from the Southroads location, but I can see why. There was just no place to put it and the bar that's there now is very functional.

I'm just glad to see they -and their delicious sandwiches- are still around.

Nothing better than a drip beef on a Saturday afternoon!

Diamond Jacks is a great place to eat!

Somebody please start a petition or something to bring DJs back. Maybe a half penny sales tax or a bond... anything...

I loved that Diamond Jack's at Southroads mall. It was a childhood favorite, having gone there 1967-1985. The decor & nice wooden bar were unique. Their food was delicious too. I'll always be attracted to turn of the century motif establishments because of all of my wonderful visits to Diamond Jack's. ~Amanda L.

My best friend, David Reynolds and I played guitar and sang there at both locations back in the early 1970's.... I believe the owners were the Applegate's.... great folks.
Richard Palazzo

So sorry that the restaurant was retired. I miss it on a regular basis! It was the first bite I had coming off the plane to T-Town for the summer. That was in 1976. Thanks for the wonderful memories!

Wish they were still here, missing it every weekend

Does anyone have the house mustard recipe?

I loved going here with my family as a kid. I’m currently pregnant with my third child and have been craving their mustard. I haven’t had it in years! I came here on hunt for the recipe. What I wouldn’t give for it haha!