All day today, I’ve been hearing REM’s “Man on the Moon” refrain in my head. Some times you really do remember exactly where you were, what you were doing and thinking when a significant event occurred.
July 20, 1969 - We had been in our newly built house in Sungate for 5 years and were no longer considered “out in the country” (or outside of city limits). I was a child of 11 years old and had been enjoying a typical summer evening out playing with the other neighborhood kids, I’m sure playing some version of Good Guys vs Outlaws or I Spy.
On this night, my Grandpa came over for dinner and stayed very late for him. Way past his bedtime, he said. But it was to witness history being made. I was aware of what was to take place, that the Apollo 11 had landed on the moon earlier and Neil Armstrong was going to get out and walk on the moon. It all seemed so science fiction and unreal to me.
Looking back, I can only imagine what it must have been like for Grandpa. Born in 1895, he was 73 years old this day and had seen his share of history in transportation: the airplane, the helicopter, the Model-T, the jet engine, the turboprop airplane, the hovercraft, and rockets. Rockets that were now taking man out of our world, as we knew it, into another one. I remember running outside several times and looking up at that big, bright moon wishing I could really SEE them up there then running back inside to look at the grainy picture on our RCA color TV set and I was amazed. I can only imagine what my Grandpa must have felt. I do remember him saying to me several times that I would remember this night, that this was history and it was going to change everything. He just didn’t seem really happy, to me, about this change. I sensed a kind of uneasiness about him. Grandpa passed away about 18 months later. He died during what must have been a very turbulent time for him, having grown up when things were so vastly different. But it was he who passed on to me, grandchild number 5, the interest and important value of history- family mostly, but world history as well and for that I am eternally grateful. 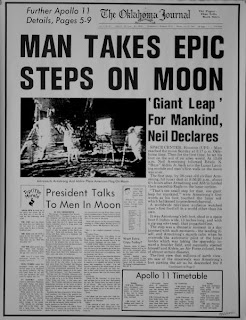 You jog my memory to recall my great Aunt who was in her 80's when this happened. She said she wished they would leave her moon alone.

I remember that night very well also. I was ten years old that summer. My grandpa was born in 1889 and I remember he said, "I can't believe I've lived to see this day!"