Tulsa’s nightclub scene in the 1940’s got even better after the war when servicemen such as my dad returned and joined others in playing Big Band music on weekends at Tulsa’s swingin’ nightspots. During the week, dad was attending TU on the GI bill, learning about radio broadcasting and eventually becoming the first station manager at KWGS. Later he hosted “Listen With Larry” on KOME. I recall him telling us about his Man On The Street days and getting to interview some famous people. He was there, amidst the huge crowds, covering the movie premier of “Tulsa”. 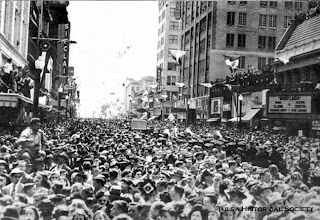 And on the weekends, he was “keeping his hand in” the music he loved. Dad was a drummer and apparently a very good one at that. We never actually heard him play any, as he gave all of that up when he married mom and settled down. 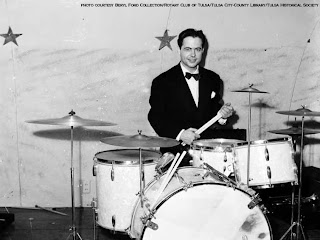 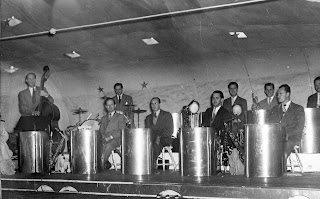 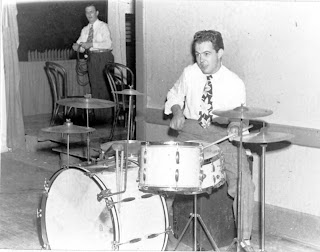 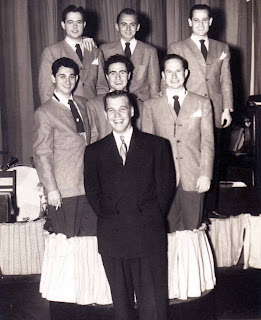 Tulsa had some great nightclubs or dinner clubs. One of the most popular ones was The Blue Moon. 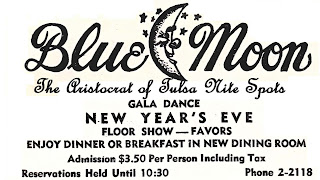 Dad also played at these other fine places: 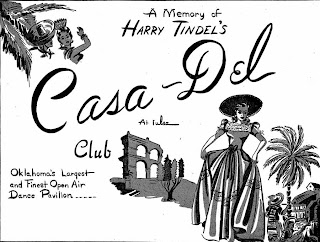 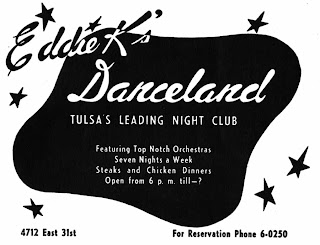 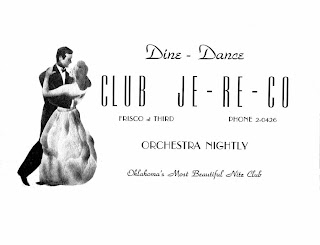 Needless to say, we girls grew up listening to and enjoying jazz and Big Band music. Our Friday night ritual was going out to eat and, on the way home, listening to the Johnny Martin Show on KRMG. Just hearing the man’s voice again zaps me back 40+ yrs. “It’s case night in the city” You can read all about him and listen here:
http://tulsatvmemories.com/tulramar.html

Johnny always closed his show at 8:00 pm with Basically Blues performed by Buddy Rich. At our urging (and I’m sure dad’s secret pleasure) we urged him to turn it up when that song came on. He seemed to time it perfectly that we would be on the way home when that song came on. The album was made in 1966 and re-released in 1996 much to my joy. You can listen to it now, if you want to. I can dig it.

Just found you via Twitter. Um, where have you been all my life? LOVE THIS BLOG. Please, oh please, keep it up.

Thank you so much for the encouragement!! I really appreciate that!

The Casa Del Club has also been known as the Golden Drumstick and the Middle Path:

This is a great post. I can't believe the streets so packed with people in the first picture. What was the occasion? It looks like a parade is marching down the center of the street.

If I am not mistaken Eddie K's is still on East 31st as Eddie's steakhouse. And if the Blue Note was the one on top of Cincinnati hill at about 4000 North then it was the original meeting place on Sunday morning for the congregation of St. Mark's Episcopal Church, now St. Aidan's.

Were the people crowding the streets in that first picture because of the premiere of the movie "Tulsa?" The picture looks like it might be older than the late forties, though. But, I've always heard that was the biggest crowded downtown Tulsa ever had.......during the parade with Susan Hayward and Robert Preston.

Well, if I had read better the first time, I would have realized you had answered the question!
That's what I get for scanning.
This blog is so much fun and so so interesting!

My grandfather was Police and Fire Commissioner during the premier of the movie "Tulsa". He said it was a logistical nightmare. They wanted to tow an oil derrick down the street but it was too tall for the power lines.
James

James, I bet your grandfather knew my grandfather. Mine was the City Engineer during that time. And I had heard that story about the oil derrick.
Nancy