One of my first research questions came from a woman who was adopted and had recently learned that she had been born at Flowers Hospital in Tulsa in the early 1940's. Flowers Hospital? I'd never heard of it.
So I began searching through the old Polks directories and did, indeed, find the hospital listed at 523 North Boulder in the 1925 directory. Further research showed it was listed until 1952. The Matron (head nurse?) was Mrs. Victoria Warren. I called the woman and told her that it was all I could find.
A few weeks later I was looking through an old promotional pamphlet from 1927: 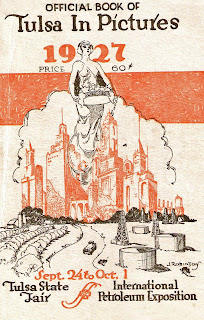 These booklets promoted Tulsa and were, of course, paid for with advertising. This one in particular included photos from most of the businesses listed. And what do you think was right there, on page 1? 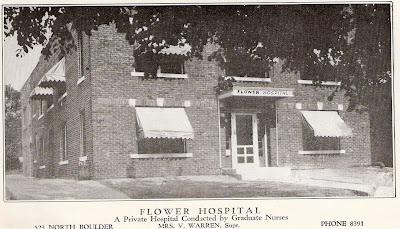 Which just goes to show: you never know where you'll find something!
Posted by Nancy at 11:18 AM

Yep just shows what happens when you keep your eyes open.
The Hospital looks like something out of the twilight zone.

My Daddy was born here!

First time i ever seen a picture.

All I ever heard was it was closed in the 50's