I love this picture. This is actually 2 buildings. On the left is one of Tulsa’s first movie theatres, the Lyric which was located at 1st and Main. On the left side, downstairs, is the Tulsa Candy Company where peanut brittle was made and sold to movie goers. On the right is Tulsa Banking Company upstairs (see the woman in the window?) and downstairs is the Oaks Café where one could purchase a chicken dinner for 25 cents. This is around 1914: 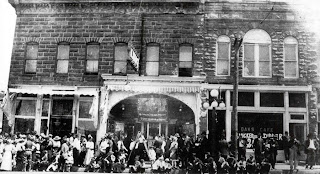 Here is another good one. In this photo you can purchase a chicken dinner for 5 cents. I love so many things in this picture. The expression on the 2 women’s faces is great. Is the one on the left perturbed at the dog being in the picture? The one holding the dog is really hamming it up! Then, there’s the gentleman who appears to be on the phone in the back: 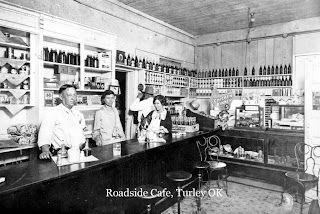 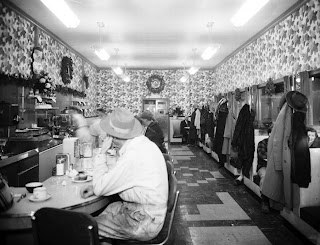 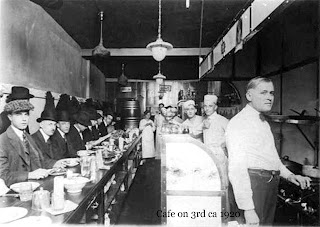 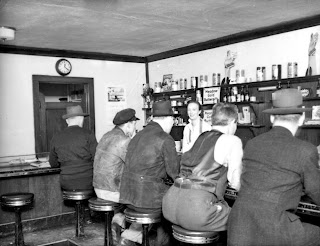 Pig Stands came about when a Texas businessman and entrepreneur named Jesse G. Kirby had a vision: Take a basic and popular food item, such as a barbecue pork sandwich, combine it with a soft drink such as Coke or a Schlitz beer, and offer them both in a package deal that catered to the new automobile. Food for people on the go! He called it The Pig Stand, which would become the first drive-in restaurant. It was an overnight success and took off across the nation, destined to change the food industry in the United States. By 1934 more than 120 Pig Stands were in operation in nine states. Fast food was born. The term "Pig Stand" was used by many who were not affiliated with Mr. Kirby's business. Franks Pig Stand in Tulsa was located 1440 S Boston: 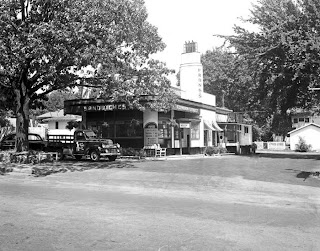 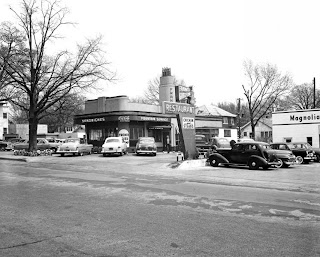 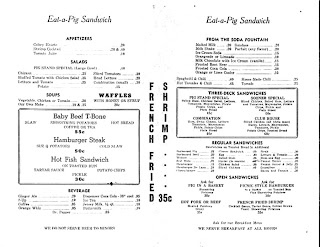 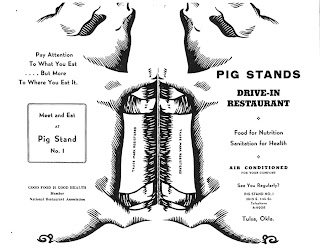 The Reeder family, some of Tulsa’s pioneers, operated various businesses, one being the Reeder Hotel which was located at 117 S Boston: 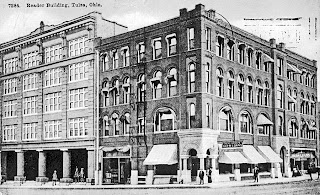 A few years before Urban Renewal took down this area, you can see the Reeder Hotel, and it’s coffee shop sign: 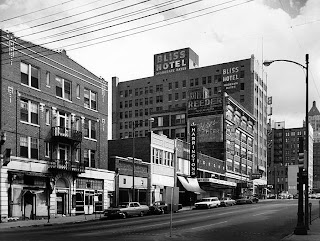 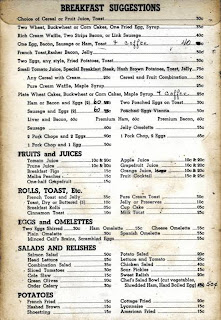 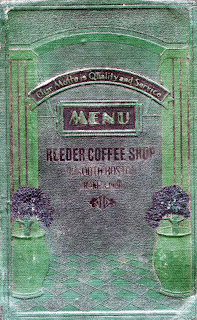 Great thanks. I'm really intrigued by the buildings that got torn down for urban renewal.

I'm interested in all of the buildings that were done away with because of Ubran Renewal also.
This was so interesting to me because I don't recall the Reeder Hotel at all. I've always been fascinated with the Bliss and there the Reeder was, right by it!
It's in my 1968 phone book, but I'll bet it wasn't there for long after that.

Your Mom is having baby back ribs for dinner tonight and it made me think of the Pig Stand in Tulsa that was on 11th street, about a block from our house.

Whenever the neighborhood urchins roamed by the barbecue pit and the man who tended the pit was out working, he would give us a some meat on a piece of white bread. For some reason, I can remember having dried mud on my hands and taking my handout home.

I searched on "The Pig Stand" 11th street, Tulsa, OK and came up with the above link.

As I say all the time, it is amazing what is on the internet.

My grandfather work at Harrington Men's Clothing store for 50 years as a Elevator Operator and other duties assign.