Hello and welcome if this is your first time to visit!  This blog began in 2009 as a way to share Tulsa memories and history with others.  It was (and is!) a joy to know it is still being read and enjoyed by many, as well as being used by local students. I enjoy the many stories shared in comments and hope you do as well.  While I have moved on to other projects,  I plan on leaving this blog here for as long as possible. Thanks to spammers, I do have to monitor all comments, so it may take a minute for those to show up. I know that searching for subjects on here can be difficult (I wasn’t the best at labeling things then) so please, if you are looking for something in particular that you can’t find, DO use that little search bar in the farthest upper left hand corner; type in the word(s) you are looking for and cross your fingers!  In the meantime, I hope you enjoy the journey.   Nancy aka Tulsa Gal
Posted by Nancy at 7:51 AM 12 comments: 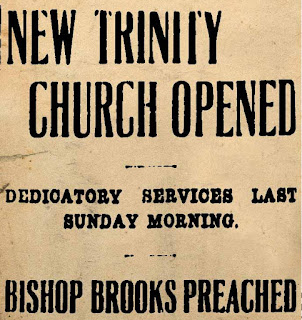 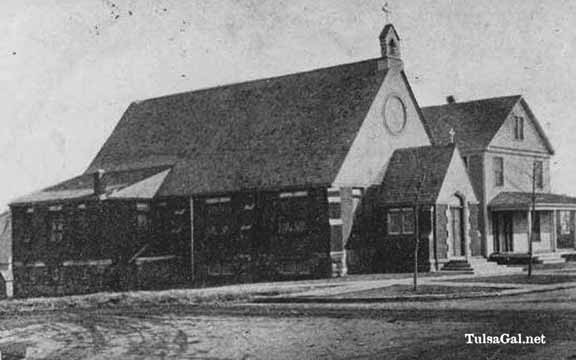 In 1920, when the congregation outgrew this building it was razed and a new building was constructed.  From December 1920 until June 1922 services were held in the Majestic Theater.  The new church was dedicated in May of 1926.
Posted by Nancy at 2:36 PM 5 comments: 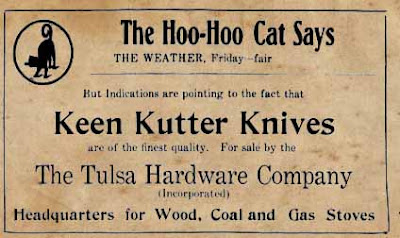 Fraternal orders and societies have been around for decades but as one blogger noted:  the International Concatenated Order of Hoo-Hoo is not your father’s skull and bones.  This fraternal society, founded in 1892 in Gurdon, Arkansas, was intended for the lumber industry - and all industries associated with lumber- to join together and “allow (their) fellowship and goodwill to trickle down to every timber organization.” 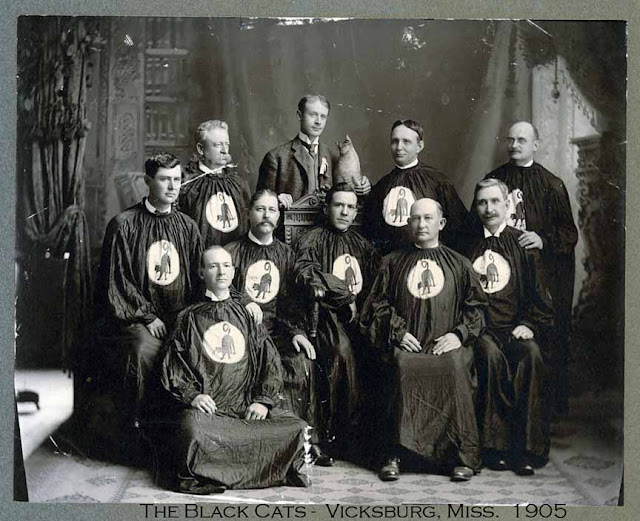 Choosing a black cat with it’s tail curled into a 9 was one of the many ways the new fraternity tossed superstition into the wind.   The officer titles of the Supreme Nine appear to have been inspired by Lewis Carroll, beginning with the Snark of the Universe.  Read the blog from the Forest History Society archives HERE.

The Territory Federation of Woman’s Clubs was coming to Indian Territory and Tulsa’s new club, The Hyechka Club, needed to raise funds to cover the cost of entertaining them.  They placed this ad in the 1906 newspaper; note the ‘warning’ at the bottom. 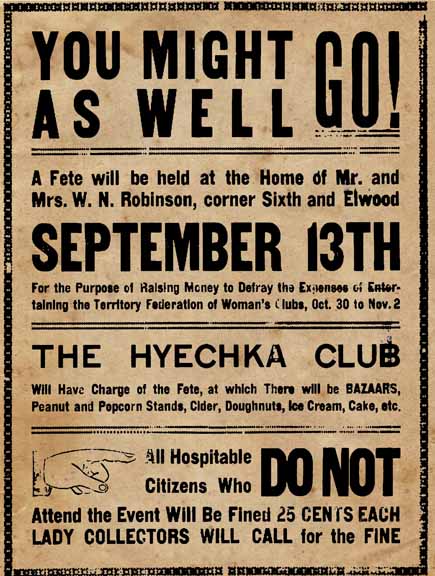 The Hyechka music club was organized on October 20, 1904 in Tulsa I.T.  The city population at that time was around 3,500 when ten ladies gathered above the Sell’s Drug Store to organize a pioneer music club.  The Creek Indian generic word for music is Hyechka (pronounced Hi-yeech-ka) and was selected as the name for the club.  To read more about the club’s early history, click HERE
Posted by Nancy at 8:19 AM No comments: 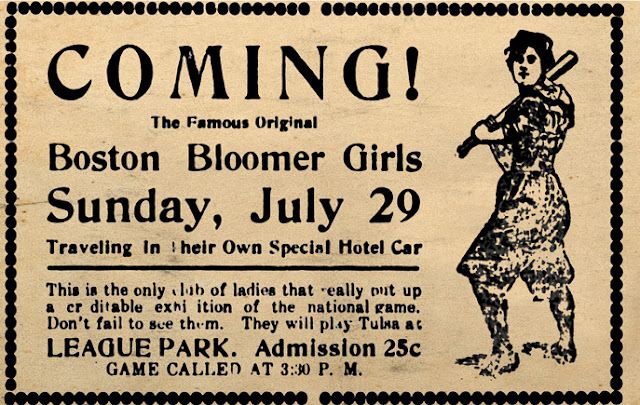 Women’s baseball teams have been around since 1866.  The first game where fans were charged and women players were paid happened in 1875 between the “Blondes” and the “Brunettes” in Springfield, IL.  In the 1890’s through the 1930’s the novelty act of women playing baseball attracted fans from across the country.  Teams traveled around the nation playing local teams, both male and female.  To allow for easier play the women  preferred practical, loose Turkish-style trousers created by suffragette Amelia Bloomer.  Hence, they became known as Bloomer Girls.
Posted by Nancy at 12:16 PM 2 comments:

Email ThisBlogThis!Share to TwitterShare to FacebookShare to Pinterest
Older Posts Home
Subscribe to: Posts (Atom)
Hello there! If you love Tulsa and it's rich history, then you should enjoy my blog because so do I!